Some of you weight lifting parents out there probably like the idea of taking your kids to the gym with you for their health and to build that grit thing the child psychologists are always stressing.

That part of you yearns to SWAT team their bedroom door down, punch a meaty fist right into the middle of the video screen and their latest Fortnite foray, wrap a bundle of HDMI cables around their necks (gently), and drag their slovenly, chubby little butts down to the gym.

But another part of you hesitates. You wonder if lifting could injure them, or stunt their growth so much that they'll never-ever be able to reach the Nutella without standing on a footstool or on the back of Chewie, the family's golden retriever.

But there's no reason to hesitate. As long as your kids are emotionally mature enough to take and follow instruction, you've nothing to worry about. Weight lifting won't stunt their growth and it's safer than most sports.

How Did That "Stunt Your Growth" Thing Start, Anyway?

For years, laypeople noticed that a lot of weight lifters were short little fellers. The assumption was that the weights were somehow restricting their tiny, chicken-leg sized bones from inching skyward.

Later on, doctors also noticed the shortness of many weight lifters but came up with a slightly more scientific and equally wrong conclusion. They thought that lifting was causing damage to the epiphyses, or growth plates, between the bones.

And, in truth, injuries to this area of the bone can lead to premature epiphyseal closure where the damaged joint stops growing and the uninjured joints keep growing, possibly leading to the type of deformities exhibited by the monsters in any Tim Burton movie.

But all of this is largely bunk. Believing that weight lifters are short because they lift weights is like believing basketball players are tall because they dunk. If they happen to be short, it's because shorter people often have advantageous limb lengths that make weight lifting easier and more satisfying to them, the same way tall people find basketball easier and more satisfying because they have a shorter distance between their fingertips and the hoop.

There's also the psychological component. Many short men seek additional muscle to shore up any low self-esteem they might have from their lack of height. So any shortness is more the cause than the effect.

As far as possible damage to the epiphyses, this is extremely rare and would probably never happen unless an extremely ambitious and enthusiastic child were left unsupervised and started pretending his chubby kid sister was an Atlas stone and tried to hoist her on top of the bird feeder.

In other words, doing stupid stuff might lead to growth plate damage, but not so much regular, sensible, weight training.

This isn't just my opinion. A recent survey of 500 sports medicine experts asked a simple question: Do you agree with the statement, "Resistance training should be avoided until physeal closure"? The overwhelming majority answered that "this statement is very likely false." 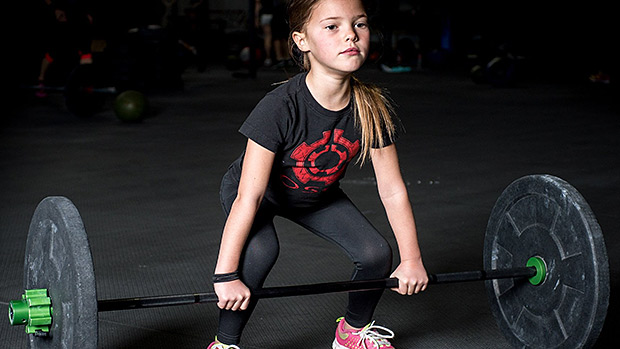 At Least They Won't Get Bonked on the Head

There are, of course, a handful of cases where kids got injured from weights, either from misuse of the equipment or from competing in no doubt overzealous youth weightlifting and powerlifting programs. This influenced the American Academy of Pediatrics, in 1990, to recommend that kids not participate in strength training prior to reaching physical maturity (until they were at least 16 or so).

One study found the injury rate per 100 participant hours among resistance training kids to be about 0.035. Compare that to 0.800 among adolescent rugby players. Moreover, the majority of injuries sometimes seen in adolescents are trunk injuries, and this is thought to result from an over-emphasis on training the "mirror muscles" (just like their old man?) instead of the core or trunk.

None of this is to suggest that injuries like those involving the growth plates can't occur (in lifting or any sport), but as mentioned, they're rare, especially with proper supervision. Besides, growth plate injuries are quite common in kids, lifting or no lifting, and most resolve completely with medical treatment.

What Does Lifting Do for Kids?

Various studies have found that weightlifting, or more accurately, resistance training, can have the following positive effects on children:

And, God willing, a reduction in dickish behavior in general.

What Age Should Junior Start?

The American Academy of Pediatrics has eased up on its recommendations regarding weight training and children. They now say that since "balance and postural control skills mature to adult levels by about 7 or 8 years of age, it seems logical that strength programs need not start before achievement of those skills."

Of course, strength programs can encompass a wide variety of activities outside of actual weight lifting. Bodyweight training, stretch band training, and sandbag training could theoretically all be done well before the age of 7 or 8.

The World Health Organization Academy of Pediatrics, along with the Australian government, however, are a little more liberal than their American counterparts about kids and weight training. They recommend that children between 5 and 18 years of age engage in muscle- and bone-building activities at least 3 times a week. 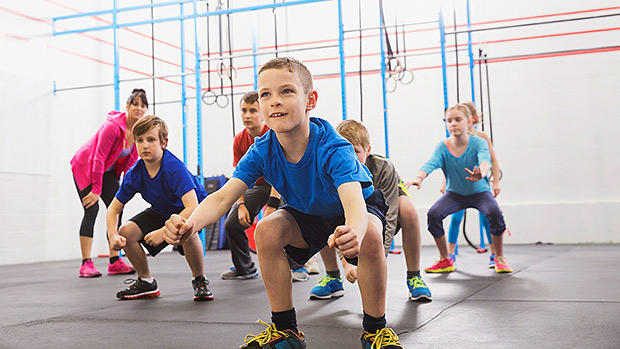 What Kinds of Workouts Should Junior Do?

As mentioned, very young children (under 7 or so, depending on their physical and mental maturity) could start with bodyweight exercises, things like push-ups, squats, lunges, pull-ups or just hanging off the bar, planks, bear crawls, and mountain climbers.

At a certain point, resistance bands could be added to many of those exercises, along with some sandbag or medicine ball work and sled dragging.

As the child masters those movements, he or she could transition to machines and cables, ultimately progressing to free-weight movements such as goblet squats, dumbbell Sumo deadlifts (holding onto the top of a dumbbell, legs spread apart), bench press, and maybe some curls for the little girls (or boys, as the case might be).

The only thing I might discourage during these early years is any direct overhead work. Shoulder work, at least for the first few years, should probably consist of rotator cuff work to bulletproof those suckers against inevitable future insults.

Beyond those recommendations, there are no specific, generally agreed-upon programs for children. His or her progress will largely depend on maturity, perceived motivational level, and the wisdom of the parent or trainer assigned to the job.

Are you trying to throw a punch or are you playing patty cake? Here's how to develop raw, devastating power.
Powerlifting & Strength, Training
Geoffrey Riviere June 17