The Key to Explosiveness

Core development is essential to any sport. It takes a strong core to provide a solid support system for explosive, powerful movements.

After five years of testing MMA fighters at the professional level, it's clear that the fighters who can punch and kick with the most power are rarely the guys who can bench press or squat the most.

The knockout artists are the ones who perform best with exercises such as the ab wheel rollout and Pallof Press.

When the deep core muscles that support the spine are weak, your nervous system puts the brakes on your explosive potential as a protective mechanism. Not only that, but insufficient core stability strength will set you up for injury and limit your mobility.

I once thought that deadlifts, squats, pull-ups, and standing military presses were sufficient to strengthen the core to the level it needed to be for any sport. But my position on core training has changed.

I had the opportunity to work side-by-side with the godfather of core development, Dr. Stuart McGill. And later I worked with another spinal expert, Dr. Craig Liebenson. What I learned from them has transformed the way I approach core training, especially with fighters.

Train your core with these techniques and you'll boost explosive power, reduce the chance of a back injury, and even improve mobility.

The first issue that needs to be addressed is spinal flexion. Research by Dr. McGill shows that repeated spinal flexion is detrimental to the intervertebral discs. The strategy of rolling out of bed and then bending over to touch the toes with a rounded spine to stretch your back is enough to make McGill have a coronary.

For McGill, the ability to maintain lumbar lordosis (an inward curvature of the low back) while lifting and moving reigns king. When your trainer tells you to keep an arch in your low back while pulling a deadlift, he's telling you to maintain lordosis.

McGill has tested many NFL players who have blown-out discs, and as long as they maintain lordosis on the field, they can continue to play. That's how important lordosis is.

Let's switch gears for a minute.

Imagine you're standing in line at the movies and your cantankerous brother pulls his arm back and throws a punch toward your gut.

What happens as you see the punch coming toward your midsection? The nervous system induces a reflex response to pull your ribcage down and in. This allows your abdominals to quickly induce high levels of tension.

Yep, your nervous system is forcing you to lose lordosis in order to develop maximum tension in your abdominals to protect your organs from the vicious blow. This is a necessary protective mechanism, and you should never argue with your nervous system.

Now imagine how many times a fighter must deal with a punch or kick that's rushing toward his midsection.

So when it comes to developing a fighter's core strength, some level of spinal flexion is necessary. You can't develop maximum tension in your core without a little flexion.

Even though the regular plank and side plank are excellent exercises for beginners, a fighter or any power athlete needs more challenging core exercises to develop a bulletproof core.

Therefore, even though the good doc has shown us that spinal flexion can be detrimental, fighters must flex their spine to some degree at times when training the core. But how much spinal flexion is acceptable?

Try this simple exercise. First, sit up tall in your chair with your chest as high as possible. Feel the bottom or your ribcage push forward as you lift your chest.

Now, place your fingertips on your lower ribs. From here, pull your ribcage down and in until it stops. Make a note of how little your spine flexed when you did that. This is the limit of spinal flexion you should ever train. Any further flexion is detrimental to your spine and discs.

So the good news is that it only takes minimal spinal flexion to develop maximum abdominal tension.

The "dying bug with a wall push" is an excellent way to develop maximum abdominal tension without imposing unnecessary risk to the discs. Maybe you've seen a regular dead-bug exercise, but the addition of the wall push activates the lats, which are essential for core strength.

Next up is the leg curl with a single-leg balance performed with a Swiss ball.

This exercise builds stability strength in the core and hips while activating the hamstrings. The core isn't just a collection of muscles around your belly. It's much more than that. Think traps to hips – an area which contains numerous muscles that impact your posture, not just your six pack.

With this exercise you activate the outer hip muscles, glutes, and hamstrings which help provide stability to the core. Do 2 sets of 10 reps.

There's a relationship between core stability and hamstring mobility.

The potentiation from a supramaximal hold may be due to enhanced core stability from the super-heavy load. After all, holding a deadlift near lockout with more load than you could lift for a single rep is very challenging to the core!

I worked with a world-champion point karate fighter who had a problematic low back and hamstrings that were tighter than guitar strings. He'd spent years stretching and getting massage and chiropractic adjustments to correct his back and hamstrings problem. Nothing helped.

I retested his standing toe touch and he increased his range of motion by five inches! Keep in mind, this was after just one set of those two exercises. There was no additional stretching involved.

I've witnessed this same benefit with athletes who have a notoriously tight quads (rectus femoris or tensor fascia latae). If you've been impaired with overly-stiff hamstrings or quads, work on strengthening the deep core muscles. You'll be surprised how quickly they'll release once you activate the core.

Try it for yourself. Do a standing toe touch test. Then perform one set of the previous two core exercises and retest your toe touch attempt.

Even better, this type of core training results in a permanent increase in mobility after just a few weeks of daily training. Stretching is rarely the answer to lower body stiffness. It's just a temporary Band-Aid.

Usually there's a lack of stability strength at the spinal level that's causing the nervous system to lock up the muscles as a protective mechanism.

If you've never performed this exercise before, you'll be shocked by how deep you feel the muscles firing within your core.

Start with small circles for the first workout. Then focus on increasing the range of motion, or size of the circle, as you become accustomed to the exercise.

The goal with this exercise, or any core exercise, is to make it as difficult as possible.

The Pallof Press is a terrific exercise to train the core muscles that resist rotation.

Strengthening the muscles that resist rotation is key to developing a lethal hook to the body, among many other moves and strikes. It's the ability to resist rotation once you land a strike that's essential to transferring power through your body.

Do two sets of a 20-second hold with each side.

Start your workouts with a circuit of the four previous exercises, or do the following circuit every other day.

Many people save core training until the end of the workout, but with these types of exercises it's often best to put them first because they activate your full body support system so you can lift more weight in your main workout. Plus, this core enhancement will help protect you from a back injury during your training.

If you don't need this much core training and want to focus on increasing your lower body mobility, do the dying bug with a wall push and the leg curl with a single-leg balance every day until a normal range of motion has been restored.

Compound free-weight exercises do provide a strong stimulus for core development. But if you're a fighter or you want to improve your explosive power and mobility, you need a more targeted approach.

Give this program a try for one month and you'll look and perform better than ever!

You already know you need to "row to grow" but you've probably never tried this effective row variation. Check it out.
Tips, Training
John Meadows September 19

Charles Poliquin is a genius when it comes to devising innovative, painful exercises and his One-Arm Barbell Eccentric Curls are no exception. They're guaranteed to hurt, along with eliciting stares from other gym members.
Training
T Nation March 28 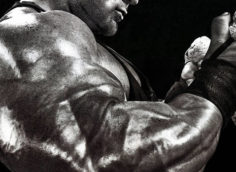 Still doing 3 sets of 10? Time to ramp it up and trigger some new growth. Here's how.
Bodybuilding, Tips, Training
Paul Carter January 11