First, I apologize if I left out one of your favorite exercises. Don't take it personally. I performed these experiments in my garage, and while I have one of the baddest garage gyms in Arizona, I don't have a lot of machines.

I'm also sorry I couldn't test more individuals. These experiments are very labor-intensive; in order to measure every exercise on every muscle part using a variety of subjects would be a project of colossal proportions. Just remember this: people are different, but not that different. What's true for me is probably true for you.

Finally, I'm not going to make any judgments regarding the safety of any exercise. I realize that certain exercises pose greater risks to the joints than others, but every guy has the right to train however the hell he chooses. As lifters, we can choose to assume a lot of risk or little risk since we're the owners of our bodies.

Oh, one more thing: good form, a natural tempo, and a full range of motion were always used in these experiments.

Now that the pre-flight safety announcement list of warnings is over, let's get to it. Are you ready to build big lats, thick traps, and bulging biceps?

Since this is a bodybuilding experiment, I used weight that was light enough to allow me to perform at least five repetitions. The only exception was on the weighted chin and pull up movements; I used loads that represented my 3-rep max. The mean number is on top and the peak number is on bottom.

To refresh your memory, researchers typically use mean MVC for their data. It measures average activation throughout the entire repetition. Peak activation is a measurement of the highest point of activation during the repetition.

(For more on this, please read "What Are Mean and Peak Activation?")

This series of experiments was the most predictable of the ones I've performed. Almost all great backs are built by heavy chins, pull-ups, bent-over rows, and deadlifts. We've always known that chins and pull-ups hit the biceps hard and that deadlifts and bent-over rows work the entire back. A few years ago, Alwyn Cosgrove recommended training your upper back if you want bigger biceps; judging by the upper back activity involved in heavy barbell curling, it seems that Mr. Cosgrove was right.

We've long suspected that lat pull-downs are inferior to chinning for lat activation, and now we have some data to support this claim (although the comparisons aren't really fair as I went heavier on the chins).

I was always a bit skeptical of the prone trap raise and wondered how it stacked up to heavy chin and rowing movements for mid and lower trap activation. I've got to hand it to vintage T NATION contributor Don Alessi, who included the prone trap raise in several different programs almost a decade ago, as well as shoulder guru Eric Cressey, for recommending this exercise. It's a kick-ass isolation exercise for the mid and lower traps.

I've never been a big fan of the wide-grip seated row, since the range of motion seemed too short. This experiment lends validity to my hunch. I also thought the dumbbell elbows out chest-supported row was an extremely underutilized exercise for the mid and lower traps. Right again.

I often wondered if the increased range of motion in the dumbbell bent-over row led to increased lat activation over the barbell bent-over row. This experiment cemented my belief. (I used a 45-degree angled hand position on this exercise and raised the dumbbells up a couple of inches higher than I do when I use a barbell.)

The TRX and blast strap feet elevated inverted row didn't seem to activate as much overall back muscle as the overhand and underhand grip barbell counterparts. Maybe it's because my torso met the barbell at the upper abdomen, which increased the lever length. In the TRX row, I raised my body closer to the shoulder joint.

I was shocked that some of the movements I love didn't perform as well as I expected, specifically the dumbbell chest-supported row and the band seated-row (seated rows using a jumpstretch strong band and a v-handle). I really feel these movements working the entire upper back region, but according to this experiment, they're inferior to other exercises.

During experiments like these, one is often left with much curiosity. Why didn't I test corner rows (aka T-bar rows) and power cleans? Why didn't I make Dan John happy and test the power curl (a combo of the power clean and barbell curl)?

Now that the study is over, I'm pissed at myself for not going heavier on rack pulls. I could've pulled 405 for 12 reps.

What if I had used a 5RM and increased the load to around 475? Similarly, I can go heavier on one-arm rows. What if I would have used 140 pounds or 160 pounds and "cheated" a bit? How would the common chest-supported row machine have fared in this experiment? What about various row machines and Hammer Strength lat machines?

And perhaps the biggest question: Why the hell didn't I test the king of all back exercises, the conventional deadlift?

Based on the results of this experiment, I bet the following would be one kick-ass workout that'd target the lats, mid, and lower traps as well as the biceps. Enjoy! 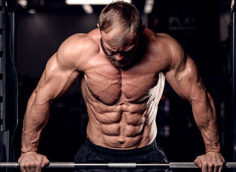 Use these moves to build real-world core strength. Or, you know, just do them because abs look awesome. Whatever.
Training
Gareth Sapstead July 17 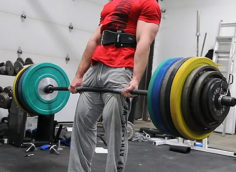 Newbies do it, and it can even sneak into an experienced lifter's workouts. Here's what to watch out for.
Powerlifting & Strength, Tips, Training
Andrew Heming May 29

If you train like everyone else in the gym, then you're probably not training very well. Try these little-known exercises, stand out, and make gains.
Bodybuilding, Powerlifting & Strength, Training
Chris Shugart & TC Luoma September 13