Mark Dugdale first stepped onto the bodybuilding stage in 1997. He'd later step onto the Olympia and the Arnold stages as an IFBB pro. And with nearly 40 competitions under his belt, it seems he's just getting started, earning another trip to the Olympia stage at age 42 (212 division).

Despite all that, bodybuilding isn't at the top of Mark's list of priorities. Faith, family, and his business come first. Mark isn't your typical bodybuilder, as we found out in this exclusive interview.

T Nation: Your faith is a big part of your life. Do you ever feel like the nature of bodybuilding conflicts with some of the guiding principles of Christianity?

Vanity, pride, and issues of worship are mostly tied to motivation, which comes from the overflow of our hearts. As such, it's difficult to pin down a person's motives and heart's desire without rendering a judgment that's above our pay-grade.

I'm a bit of theology geek, really love the Bible, and could go deep into biblical evidence for and against participating in bodybuilding, but I'll save that for when I write a book on the subject. The best thing we who claim to follow Jesus can do is examine our heart's desires and ask ourselves if they are God-glorifying or self-glorifying, submit ourselves to authentic prayer, and be open to responding to the prompting of the Holy Spirit.

T Nation: You're known as a very grounded and humble guy. How do you stay that way in a sport that requires you to, in a way, show off?

Dugdale: By submitting myself, to the best of my ability, to the calling placed upon me as a man via the person and work of Jesus. Acknowledging that every breath is a gift from God, which, when unrolled means every workout, meal, cardio session and competition is a gift. Living with a deep sense of gratitude tends to leave little room for pride and arrogance.

T Nation: You began competing over 20 years ago. What's your impression of the state of bodybuilding and all the new categories?

Dugdale: I sense a shift taking place, perhaps in all divisions. The 90's and the man who coincidentally inspired me in my teens, Dorian Yates, ushered in a good 15-year era of "mass above all else." Freaky muscularity trumped aesthetics, conditioning, and symmetry. But we're witnessing a return to a more balanced judging standard, perhaps driven by the inclusion of men's physique and classic men's physique.

T Nation: Let's get down to the nitty-gritty. What's your body part split pre-competition?

Dugdale: My training split pre-competition mirrors the off-season, aside from a more consistent focus on abs and calves. Training them tends to bore me. Here's the exact split I've followed for the past 12 months:

Secondary workouts are all about achieving maximal pump of the given muscle group being trained without taxing the CNS with intensity techniques, lower reps/heavy weights or pushing to failure. Apart from abs and calves, Friday is technically my only off day.

Training is really about hypertrophy. Increasing or at least maintaining lean muscle mass while dieting is key because muscle is the engine burning the fuel. Getting stage-ready deals more with manipulation of my diet.

T Nation: What are you doing differently this year than in years past?

Dugdale: The general principle of primary and secondary workouts performed 6-7 days a week has been the cornerstone of my training for roughly " target="_blank" rel="noopener">the past 3 years since I began using Plazma™, Mag-10®, and Indigo-3G®. Prior to using these, I simply couldn't train more than 4 days a week and recover. Now I can train 7 days a week if I want to.

Second, I religiously did hot hatha yoga 3 days per week. While this likely doesn't fall into the category of training for most people, hot yoga provided a number of benefits. It aids detoxification, improves blood flow (think recovery), elevates the heart rate (I burn a ton of calories), increases flexibility (injury prevention) and improves insulin sensitivity (heat shock protein). I only drink Mag-10® during yoga to hold catabolism at bay while tapping into fat stores.

Third, I ditched conventional cardio for 8-minute bouts on an Assault Air Bike. I place more value on EPOC than calories burned during a lengthy cardio session.

T Nation: What are you doing differently with your diet?

Dugdale: I went back to low carbs, besides those found in Plazma during the training window. My only whole-food carb sources throughout the day come from nuts and vegetables.

T Nation: What foods or supplements do you consider dietary staples?

T Nation: How do you eat in the off season?

Dugdale: I don't portion or count calories religiously in the off-season like I do pre-contest. My go-to food sources remain relatively the same. I do bump up my servings of Plazma™ in the off-season to 3-4 per workout. I'll also eat what I want on date nights with my wife without a sense of guilt. When your base diet is clean, splurging once in awhile isn't detrimental. Avoiding polyunsaturated fat and added sugar helps maintain a healthy body composition.

T Nation: Which muscle group is the hardest for you to build?

Dugdale: I'm blessed with a relatively balanced physique, but in the past I was told that my back was a weaker area. As most people know, bodybuilding competitions are often won from the back, and in my last three competition wins I was told that when I turned around onstage, I sealed my victory.

Getting away from the HIT mentality of always moving heavy weight when training back actually contributed most to my improvements in this area. Feeling the muscle working did more for me than bragging rights on pounds moved.

T Nation: Do you use a competition prep coach?

Dugdale: I do the preponderance of my own competition prep primarily because I don't trust anyone enough to guide my physique. I've been doing this for 23 years and nobody knows my body better than I do. That isn't to say I have all the answers and don't seek to increase my knowledge base. I'm an avid reader of T Nation and have gained a lot of insight from Christian Thibaudeau.

John Meadows provides me with my primary training blueprint which I tailor to my specific needs, so I'd certainly credit him with coaching me from a training standpoint. I've benefitted immensely from his training knowledge.

I'd be remiss if I didn't mention my wife, Christina. She's brutally honest during my contest prep, which is vital. She's been around the sport for as long as we've been married (19 years) and has a keen eye, especially when it comes to my physique. She does see me naked on a daily basis after all!

Dugdale: Bodybuilders are hardwired differently than other people. I learned this upon my introduction to weight training. I simply enjoy the challenge and discipline required to train, diet, and compete at the highest level. I competed for 12 years without a win, so obviously motivation was a God-given genetic trait (mostly joking). Win or lose, the best part of the actual competition is when I nail my condition or achieve a personal best. At that point it's nearly as good as winning.

T Nation: What annoys you about the public perception of bodybuilders?

Dugdale: Bodybuilding is often portrayed as an unhealthy endeavor. That doesn't sit well with me. For some people this is absolutely true, but it doesn't have to be.

I spent my off-season this last year focusing on my health. Health was always a priority, but there's something about getting into your 40's that makes you double check how you live. I purposefully kept my weight within 15 pounds of my competition stage weight the entire off-season, took up yoga, consumed more fermented vegetables, closely monitored my blood work, etc.

The end result was a more polished, tight, healthy-looking physique onstage. Don't buy into the idea that you have to abuse your body to experience success because it simply isn't true. Hard work done intelligently over the long haul is what matters most. A healthy inside will reflect on the outside.

You're punks. All of ya'. All of ya' under 25 or so, that is. Mike Mahler calls you "Generation Ent," for Entertainment, meaning you need to be constantly entertained. Well stand by to be entertained, in a manner of speaking.
Training
Mike Mahler July 21 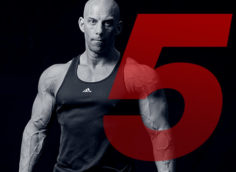 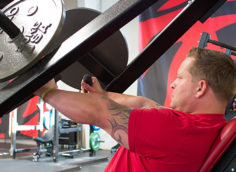 Why high-rep barbell work, heavy machine work, and partials all have a place in your training... that is, if you want to grow.
Bodybuilding, Training
Calvin Huynh May 3 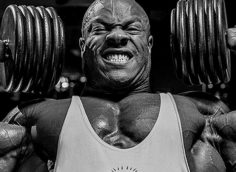