A couple of days ago, my friend and occasional workout partner, Dan Fouts, said something interesting, "Danny, you just hate medium, don't you?"

It's funny because it's true. Talk to any police officer and ask if the force likes this description: "Medium height, medium build, with medium hair." Imagine your daughter coming home from college announcing she's found the love of her life and describing him as "mediocre in every way, but poor or excellent in nothing."

Thanks to Alwyn Cosgrove and Joshua Hillis, a quote of mine has been running around the internet for a while:

"Fat loss is an all-out war. Give it 28 days – only 28 days. Attack it with all you have. It's not a lifestyle choice; it's a battle. Lose fat and then get back into moderation. There's another one for you: moderation. Revelation says it best: 'You are lukewarm and I shall spit you out.' Moderation is for sissies."

Now, Gentle Reader, I have to warn you: I acknowledge that I'm probably wrong about my issues with medium workouts, medium training, and moderation in all things.

But, there are dozens of fine authors, coaches, and trainers out there urging you to keep a balance in your diet, your training, and your life, and, well, most of us don't listen to them either.

Hesiod, the Greek historian, noted, "Observe due measure, moderation is best in all things." Yeah, but what could Hesiod bench press? Plato, noted for underperforming in the squat, said, "We should pursue and practice moderation."

"What Was the Goal?"

Here's my issue: Every four years or so, I start getting emails. Not long ago, I received this thing called a "letter" with something called a "stamp" on it.

Anyway, the messages are dire.

Hard working, intelligent, genetically gifted athletes who've just competed at the Olympic trials write to tell me that after four years of hard work, on the day that it mattered most, "I just didn't have it."

Now, "Have what?" is the best question to follow up with at this point, but I know exactly what they mean.

When I ask about their training programs, they often send back literally dozens of pages of charts, graphs, diaries, programs, projects, and spreadsheets. It's easy to deal with all the paper, as I simply ask one question:

Picking a random month or time period, "What was the goal of October, 2007?"

I always get an intelligent follow-up:

Ah yes, that month, we were trying to focus on:

And, you can see why these athletes fail.

Let's review the two great principles of strength and conditioning:

Oh, don't ignore number one, here: Everything works. Yep, everything. That's why sometimes we find that radically changing our workouts leads to remarkable body composition changes in a short time.

Say, for example, you're like me and think that long, slow running is really a method of getting information out of terrorists, but after reading John McCallum's The Complete Keys to Progress, you decide to add a little running to your training. Just going from one lap without stopping to a mile without stopping will drop fat off your body over a few weeks as quickly as those deadly cocktails of rat poison that some underground fat loss experts touted.

A few weeks later, at a party, someone will note you look "leaner" or, worse, "better." This will get you to run until your knees ache, you lose muscle, and your body comp is actually worse than when you started.

You see, remember number two, too: Everything works, but for only so long.

When Everything Means Nothing

So yeah, it all works. Nautilus training really developed my pecs and biceps. Jogging can really help with fat loss. Joining a gymnastics team will help your strength and flexibility. Doing ultimate fighting will help with all kinds of things.

But, doing everything all at once will destroy you.

You see, to do everything at once, you have to be lousy at everything. To be great, you have to focus on very few things – most of us can barely handle more than one.

Don't believe me? Ask an elite sprinter to try another event. There are 100-meter runners who won't run the 200 meter because they "don't want to be embarrassed." Now, they'll run a time faster than anyone you've ever met, but it'll be an "embarrassment" for the athlete not to post an elite time.

But, we all fall into this trap.

The best summary of training I've ever heard was from Charlie Francis at the clinic I attended this spring. Most people's problem is this:

"Their highs are too low and their lows are too high."

I've been as guilty as anyone in taking potshots at the High Intensity Training crowd (c'mon, they call themselves "Jedis"), but the original work of Arthur Jones still demands respect.

Years ago, I had an interesting conversation with an eyewitness at the original training facility who told me that Jones nearly had to use firearms to get people to train the second time. Screaming, threatening, cajoling, and inspiring didn't seem to work in getting people to attempt to go to that level of pain again. 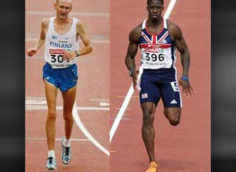 Do their physiques say something about their training styles, or is there something else going on? Here's the real story.
Fat Loss Training, Sprinting, Tips, Training
Christian Thibaudeau December 17

No, not three dumbbells, dummy, but an overhead press performed with three different techniques without rest. Check it out.
Bodybuilding, Shoulders, Tips, Training
Tom Morrison March 20

Deadlifts are awesome, but they can also smash your CNS. Here's why and how to avoid it.
Deadlift, Powerlifting & Strength, Tips, Training
Christian Thibaudeau February 26