"The perfect blend of muscle and feminine grace... "

"I'd be willing to consume any bodily fluid that woman produces without hesitation...in large amounts."

"I want to be reincarnated as her g-string!"

"I love her. Seriously."

Those are the kind of reactions T-Nation readers had when we posted a photo of fitness and figure competitor Moorea Wolfe.

But who is this "perfect specimen?" How does she train? What does she eat? Will she let us drink her bathwater? We violated several restraining orders in Arizona to find out.

T-Nation: Moorea, you got started in sports and competition at a very young ago. Tell us about that.

Moorea Wolfe: As soon as I started walking efficiently, my parents thought it would be a good idea to throw me into some "kiddie" gymnastic classes. I learn very fast so gymnastics came easily for me.

I had a really muscular build as a young kid from all those years of intense training. I'm talking about 24 hours a week of training including competitions up until 12 years old. I was forced to retire after a back injury, but I fell in love with the competitive aspect of sports and wanted to stay in muscular shape forever.

T-Nation: How did this early athletic career affect you as an adult? It seems that females with gymnastic backgrounds always grow up to have fantastic physiques.

Moorea: It's affected me in such a good way because it has shaped my lifestyle. I was born with fairly good genetics and starting out with gymnastics helped develop my body in the form necessary to stay in a fit condition for the rest of my life.

When I turned 15, I went up to Canada to join a ski-racing team instructed by the National Ski Team coaches. As fun as that was, it still wasn't what I had in mind for my career. It also helped me to do other sports that are similar to gymnastics, and that's why I got into circus and fitness/figure competitions.

T-Nation: You first competed in fitness at age 16, but then you ran off to join the circus, right?

Moorea: [laughing] That's me naturally... I did run away with the circus, so to speak. I did my first fitness show, then one day found a link on the Cirque Du Soleil website for a school that was the best in the world for its prestigious instruction of all circus disciplines. I applied and was invited to audition in Quebec.

Out of the 500 that auditioned, 16 were chosen, including me, one of the youngest. I'll never forget the moment I opened the letter of acceptance to that school. It opened so many doors and I met some amazing people. All my instructors were former performers of Cirque Du Soleil. I then learned things that I can do and perform for the rest of my life. It has built up a lot of strength in my body and helped my artistic ability to create.

T-Nation: What exactly did you learn in circus school? Sounds like a pretty unique style of training.

T-Nation: Wow, that's pretty cool stuff! So what do you do now and what are your goals for the next few years?

Moorea: There's so much going on in my life right now. I'm waiting for an opportunity to compete in the US nationally as a Canadian. Canadians have to have American citizenship in order to do national shows. I'm exploring other things in the health and fitness industry, including showbiz: auditions, shows, etc.

My goals are simply to explore and accomplish all things I desire. What I desire is endless. I'm an entrepreneur and looking for many ways to branch off into other things I love to do while integrating it with my fitness lifestyle and career. There are some big goals in the picture, but I have to remain stubborn and focused. I have to refuse to believe that I can't do them.

T-Nation: Speaking of showbiz, where do you stand on doing nudity for magazines or movies? Would you take it all off or is that too slippery of a slope for up-and-coming models and actresses?

Moorea: It's not my time to do it; I'm new in the fitness industry. I've met people who've gone down that road too soon and it has messed their careers up in certain ways. But I do "implied nudes." I think that's still sexy, if not sexier, because it leaves room for imagination!

T-Nation: It most certainly does. Let's talk training. Give us an overview of a typical weekly training schedule.

Moorea: Well, I wish I had an overview! My training is so sporadic these days, experimenting with new exercises, different sets/reps, weights, etc. With me, a "typical" week never exists; it's always changing because my physique changes very frequently.

T-Nation: Okay, how about you tell us what you did this past week in the gym?

Moorea: Oh God, where do I start? Well, to sum it all up, two to three sets per exercise with 30 second rest time and drop sets each set. A set would start with extremely heavy weight then go to the lightest weight. After repping lighter weight out, I drop back down to a heavier weight.

T-Nation: Interesting. What exercises do you think women should always perform, but seldom do?

Moorea: I think women should experiment using all the exercises. I find the "old school" exercises very good to put on muscle. Deadlifts are favorites of mine. But as for must-do ones, women have to hit the Glute Blaster, lunges, abductors and adductors!

T-Nation: Really? Do you find that women need more leg training than men? Or is it just that the lower body is harder to develop for females?

Moorea: It all depends on genetics. I know a few women who have better shaped legs than men, so I don't think they need more leg training unless their legs aren't up to par. But I do think that men have an advantage in developing muscular legs, plus men don't carry as much fat in that area.

T-Nation: Your competition weight is 130 pounds and in your off-season you reach 150 at 5' 2". You're in amazing shape, but some women would cringe at seeing anything over 120 on the scale.

Moorea: Most women don't understand that muscle is dense and takes up less space that fat. Most women think I weigh no more than 125! They freak out when they find out I'm 145 to 150 offseason.

I don't really ever weigh myself until I'm closer to a show and I have to really pay attention to detail. I just go by how I look in the mirror. I guess shorter people look quite "jacked" when they put on some muscle because it's all crammed on such a tiny frame and it looks very compact.

T-Nation: What annoys you when it comes to females and weight training?

Moorea: What bothers me is that they all seem to believe that resistance training makes you look "bulky" and that cardio is the only way to burn fat and calories. Wrong!

T-Nation: Do you do any cardio at all?

Moorea: Yes, I do a little. I'm talking 25 minutes before breakfast three times per week. I don't want to become dependant on too much cardio when I don't have to, because when I'm getting ready for a show my body changes drastically once I add in more cardio.

T-Nation: Tell us about your diet.

Moorea: My diet is in the works. Since I'm still really young (21) I have years to find out the correct and perfect way to dial in for shows. It's all trial and error. I'm experimenting by taking in more carbs every day now so I don't have to rely on zero carb days prior to a show. I'm also eating foods I'd never let myself eat before. It took me forever to finally eat a cheat meal without feeling guilty. I'm an extreme dieter!

T-Nation: What types of foods do you consider key to helping you build and maintain a great body? Any favorites or must-have staples for the weight training female?

Moorea: Clean foods. I stay away from dairy because I'm lactose intolerant. I also avoid pasta and breads. I never eat junk food or refined sugars. Lean ground beef, chicken, tuna, fish and other seafood, oatmeal, oat-bran and lots of veggies, plus low carb protein powders (chocolate of course!) make up most of my diet.

T-Nation: Any drawbacks to being in the fitness and modeling biz?

Moorea: I've learned quickly that this sport makes literally no money. But I love it so much it'll always be one of my various careers. I chose to branch off onto other things because it's where I'll make the most money. But as for exposure and all that good stuff, the fitness industry is where it's at! You just have to network and market yourself until it hurts to get a decent amount of exposure. And lastly, it's all about politics, baby!

T-Nation: I hear that some of the contest organizers and federations have asked that all competitors, especially females, lose some muscle mass. Sounds like they're politely telling competitors to back off the steroids and other drugs. Do you think that's the real message?

Moorea: Some of my pro friends have received that very letter. I'm not really sure what they're trying to regulate, but I think they want more feminine looking physiques.

A lot of fitness and figure girls are on the fine line of women's bodybuilding, and the women bodybuilders were getting too masculine looking. At least for bodybuilding, the women will have a better chance of getting some exposure by making their physiques appear more feminine on stage.

T-Nation: And beards on women can be a turn-off as well. So, where can T-Nation readers go to find out more about you and, of course, drool over more photos?

Moorea: T-Nation readers can checkout my website at MooreaWolf.com. I'm going to be selling various photos, calendars, clothing, skin care, posters and DVDs in the near future. Also look for me on Party At The Palms on E! TV with Jenny McCarthy!

T-Nation: We'll do that. Thanks for the chat, Moorea!

Moorea: No problemo. I had fun answering these! Thanks! 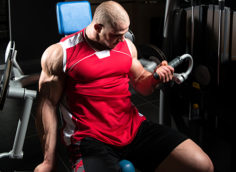 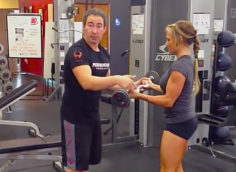 For a new stimulus, manipulate the force vector to change the point of maximal tension in the biceps.
Arms, Bodybuilding, Exercise Coaching, Tips
Nick Tumminello October 20