Our first days in the gym were probably a bizarre array of curls, flyes, and crunches, but something clicked the day someone explained that the way you get bigger and stronger was to simply put more weight on the bar each time you hit the gym. It just made so much sense. So that's what we did, and it worked like a charm.

However, we eventually plateaued, and at that point we got too smart for our own good. We started doing block periodization, the conjugate method, drop sets, extended sets, rest-pause sets, concurrent or undulating models, and even Frankenstein methods that combined all of the above.

That stuff isn't worthless; far from it. I just want to remind everyone (myself included) that the un-sexy, tried-and-true method of just putting more weight on the bar works, and not just for newbies.

We sometimes have short memories in the iron game, so we're seduced by whatever program the best lifters of today are using, in the meantime forgetting the programming of legends like Ed Coan, Doug Furnas, Fred Hatfield, and Lamar Gant. These guys would pick a meet and over 12 or 16 weeks, they'd just add weight to the bar every week until they were primed to hit PRs on meet day. It's time to revisit those simpler days and techniques.

There are plenty of popular programs that provide basic linear progressions for beginners, but let's discuss how to apply those same principles once you plateau on your beginner program.

The only thing you have to change as an intermediate is to expand your rep ranges. Instead of constantly staying in the same rep range, start at about 70% of your max and hit as many reps as you can. Drop 5% on the next set and try to match your reps from the first set. Drop 5% more and beat your rep number from the first two sets.

The two drop-back sets will usually land you between 15 and 40 working reps a week, which is the range proven to work for a combination of both strength and hypertrophy by countless programs.

The next week, add 5 pounds to the bar for overhead press, 10 pounds for bench, and 15-20 for squats or deadlifts and try your hardest not to lose reps. Obviously you'll lose reps over time as the weights get heavier, but really fight to make that as slow of a process as possible.

To make sure you're on the right track, plug your top set of the day into a rep-max calculator. As long as you're teetering around or above your old max, you'll probably be good for a PR at the end of the program. Once you're hitting a triple for your first set, deload for a week, hit a new max, and start over. It's that simple.

If you're a 300-pound bencher, this is what it would look like (theoretical numbers): 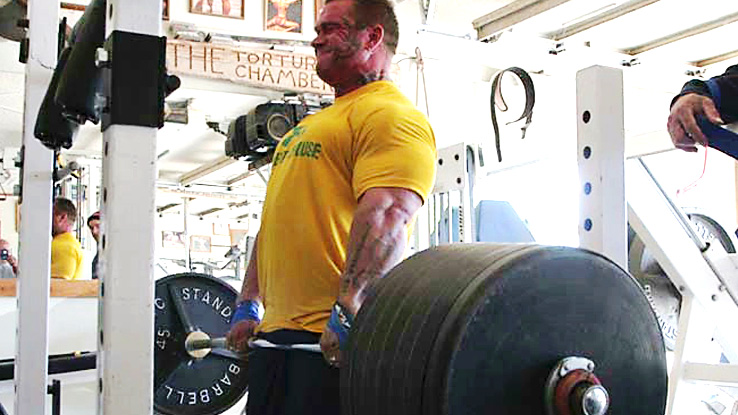 The basic setup for advanced lifters is exactly the same except you start around 70% of your weakest variation and when you're hitting 5s on one variation of a lift, move to a stronger variation the next week.

The progression of weakest variation of a lift to stronger variation, for example on squats, could look like this:

For deadlifts, you might start with a snatch-grip deadlift and gradually bring your hands in as the weights get heavier.

Here's how the progression might look if you're 600-pound squatter:

To continue our theoretical musings, this person may need to start using a belt at 380x5; switch to low bar at 440x5; start wearing knee wraps at 520x5; and then eventually work up to a 3RM at 580 before deloading for a week, followed by a new max of around 650 the following week.

I'm not saying this approach constitutes rocket science, but why make things overly complicated when they don't need to be? Just keep a rep max calculator handy, and as long as you're projecting numbers that are beating your current 1RM, you're good to go.

For deadlifts, it's advisable to just do one drop-back set, especially if you're not used to higher-rep training. Likewise, avoid going to failure. Stop each set on the last rep you know for sure you can get.

Don't get greedy and make your jumps too large. There should be at least 2-3 months between your first week and your 1RM attempt on the intermediate program, and 3-4 months minimum for the advanced plan.

Remember, the whole point is that since you're no longer a total beginner, progress happens over a span of months rather than weeks or days. On a similar note, don't get upset by relatively modest gains. Gaining 5% on a lift in a few months is huge. Over time, that adds up.

Although I experiment with lots of different training methods in my off season, this is how I always peak for a meet and it hasn't let me down yet.

If you've gotten to this point in article and you're thinking, "Well, that wasn't exciting or revolutionary," then ta-da! That's the entire point. This approach is simple, it's effective, and it's almost forgotten in a modern gym culture that's always pursing the "next big thing."

Although most of us are aware of linear periodization, we're somehow quick to dismiss what worked for countless lifters over many decades, producing arguably the best generation of lifters the sport of powerlifting has ever seen.

A squat-based training plan guaranteed to make your legs not only bigger but stronger too.
Bodybuilding, Legs, Training
Matt Kroc November 29

Hold one side isometrically in the contracted position at the bottom while the other side is moving. Add bands to really ramp it up.
Bodybuilding, Exercise Coaching, Tips
Mark Dugdale January 25 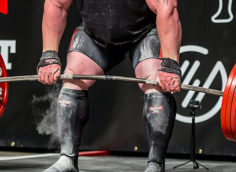 Yes, do deadlifts. But program them wisely or you'll crash and burn. Here's why and what to do about it.
Deadlift, Powerlifting & Strength, Tips, Training
Paul Carter December 4

Know the difference between a push press grip and a strict overhead press grip? They're not the same.
Exercise Coaching, Overhead Press, Tips
Tom Morrison April 19