I'll admit it. I absolutely hated the glute bridge and hip thrust for a long time, mainly because they were a pain to set up. Also, I never felt like I was getting the intended benefits.

But I did those butt-centric exercises anyway. Why? Because my wife forced me to do them with her. After nearly a year of doing them, I've noticed a few things:

I often refer back to something I heard Louie Simmons say at Westside: "I've never seen a strong person with a small ass." That same day he told me I had a weak ass, which got my wheels turning. Glute training has now become a cornerstone of my training.

Let's first go over some glute waker-uppers, then we'll dig into six exercises to get your butt bigger and stronger.

Wake Up Your Butt

These are glute activation drills. You don't have to do them both in the same warm-up, just rotate each variation you use before your lower-body days. The goal is to stimulate, not annihilate, so don't go crazy.

Sets and Reps: Do 4 sets of 5 reps. Squeeze for one second at the top. Rest a minute between sets.

Sets and Reps: Do 3 sets of 5 right and 5 left, then 5 good mornings. Rest a minute between sets.

It's like the baby brother of the hip thrust (back on bench) variation. Though this move is well known, many will skip it and go straight to the hip thrust simply because the range of motion (ROM) is greater.

Don't do that. Keep the glute bridge in your training. It's a regression to the hip thrust and may actually suit certain lifters much better than the hip thrust based on individual anthropometrics. This is a good example of bio-individuality, and why opting for the "harder" variation isn't always the best way to go.

Thanks to Dr. Bret Contreras, every serious lifter knows what a hip thrust is. It requires all four actions of the glutes: hip external rotation, hip abduction, hip extension, and posterior pelvic tilt.

Your set-up can make or break the effectiveness. As you can see, we've elevated the plates to keep constant tension through the entire ROM.

If you're lucky enough to have a BC Strength Thruster or any other hip thrust machine, then you won't have to worry about elevating the plates. The height of that bench is 12 inches versus a standard 16-inch bench.

Finally, this variation could be programmed for heavier work (think 3-6 RM), but I've found it to be most effective in the 8-10 rep range and have gone as high as 20-rep sets. Feel free to experiment.

The 45-degree back raise has high EMG ratings for glute activity. You can change the demands of it a number of ways by using additional resistance with the safety-squat bar.

This works great as a "finisher" for high volume. No cable machine? Do it with a band, but keep in mind that the effect is different. When you're using a band, the tension increases or decreases through the range of motion; with a cable machine there's constant tension.

Either way, just make sure you're getting a good hip hinge and squeeze your glutes at the top.

Sets and Reps: Accumulate 100 reps at the end of your session, resting as little as possible.

This variation was made popular by Matt Dimel for the purpose of training the lockout of the deadlift, but it also happens to be a powerful glute-builder. It's a nice high-rep variation with a short and explosive range of motion. It'll make your glutes sing like a choir boy.

Because the ROM is short, the glutes and hamstrings are under constant tension. One caveat: These should be done explosively. Think aggressive hip extension (not hyperextension) at end-range motion.

Because the volume is high (typically 30 reps per set) there's a high amount of metabolic stress.

If you have access to this equipment, consider it a huge win. What can you use instead of the reverse hyper? Well, nothing really. There are comparable movements in terms of training the same musculature, but the effect of this piece of equipment is unlike any other.

You're going to work on controlled reps where the pendulum does NOT swing out of control. At the top of each rep, squeeze your glutes hard.

If you're accustomed to using this, work up to 50% of your back squat 1RM for 100 total reps. If you're new to it, start with half that for both loading and volume.

You probably know that your glutes play a role in hip extension, but they're also responsible for hip external rotation, hip abduction, and posterior pelvic tilt. Some of the benefits include...

Just because you can pull and squat a ton doesn't mean you should try to move a ton of weight with these glute-focused exercises. At the moment, I train with nearly the same loads my wife uses despite having a squat and deadlift about three times heavier than hers.

Remove your ego and work on getting a full range of motion so you can actually feel the glutes working. The glute bridge and hip thrust, for example, work best when terminal end range of motion is achieved on each rep.

Additionally, if for some reason your hamstrings tend to take over on any of these movements, you may need to drop the weight further and adjust your foot position. 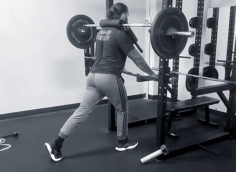 Can you do 12 reps of clean and press with a pair of 75-pound dumbbells? It's been a test of strength since the 1930s.
Bodybuilding, Training
Chris Colucci October 18