The Stabbing Pain of IT Band Syndrome

Even the best training plan can get disrupted when a case of IT band syndrome (or ITBS) sinks its fangs into your lateral knee. I often work with lifters and runners who have what feels like an icepick stabbing the outside of their knee with each step. Sounds dramatic, but that's commonly how it's described.

It can be unsettling when you sense a case coming on, like an indication of a more serious injury. It often creeps in as an annoying hot spot just above the outside of your knee, but then it can quickly flare up into searing pain with each step as you flex and straighten your knee. Going downstairs, running downhill, or stepping laterally can be especially uncomfortable.

If you have sharp and burning pain slightly above the outside of the knee, this is often the signature of ITBS.

Here's what causes it and how to fix it for good.

The lifts commonly interrupted by IT band syndrome include squats, split squats, lateral squats, and step-ups, for starters. Before you know it, you can find yourself skipping most of your knee-dominant squatting and lunging exercises... and then wondering if you can do a lower-body day at all.

The real frustration begins when you Google solutions for it, visit your doctor for a diagnosis and relief, or tap into your favorite chiropractor, physical therapist, or personal trainer for advice.

More often than not, each of these different fix-me expeditions will deliver the same advice: rest, stretch, and foam roll that area for several weeks, and you should be good.

If you've gotten that advice and have tried painfully smashing it with a foam roller along with some added stretching, you know how this story ends. The pain resolves to a reasonable level, and the moment you get back to the problematic activities, the pain skyrockets right back to where it started.

Before we get into the solutions, let's do a brief audit of why this frustrating way of dealing with this injury is rarely productive in the long term.

It's often assumed (erroneously) that IT band syndrome is a result of excessive friction around the lateral epicondyle of the long femur bone just above the area of the outer knee. It makes sense when you look at the anatomy – the far end of the strap-like IT band would get pissed as it rubs back and forth over the knobby protrusion produced by the lateral femoral condyle on the outer knee.

But that isn't exactly accurate. As researchers have pointed out (1), it's more likely to be a compression problem than a friction problem. The lower end of the IT band is secured to the lateral femoral condyle in a way that makes it hard for friction between the two structures to occur.

So, what the heck is capable of icepick-level pain if friction isn't the problem and the actual far end of the IT band itself isn't under insult?

Rather than friction, it's more likely that the bundle of adipose (fat) tissue that rests between the IT band and the lateral femoral condyle is under siege. That fatty little bundle is loaded with nerve supply and highly sensitive. Compression of this adipose tissue has the potential to make it very angry.

This is why smashing it with a foam roller while a single tear rolls down your face is the opposite of what we should be doing to address the problem.

Before we decide how to treat an injury to this tissue, we need to consider the purpose of the IT band.

The IT band serves as lateral hip and knee stability to some extent, but it's really there to conduct energy from the hip to the lower leg and ultimately to the ground as you move. Think of it as a spring that has to be springy to do its job. Not only would we want to avoid compressing a compression problem with a foam roller, but we probably don't want to stretch out a spring that's meant to be springy!

So if foam rolling and stretching aren't on the treatment list, then what is? Let's take a look at the overarching key to resolving it, and then we'll get into the specific exercises that'll help.

This is important because the ITB is simply a thickening of the fascia stemming from the gluteus maximus, gluteus medius, and tensor fascia latae. So strengthening these muscles will help the ITB to do what it's meant to do: act as a spring that conducts action and energy from the hip to the knee and eventually to the ground.

Again, grinding out the lower aspect of your ITB with a foam roller as it crosses the outside of your knee doesn't make much sense, given that we're most likely dealing with a compression of the adipose tissue in that area.

You also want to avoid a heavy focus on stretching for two reasons:

Sure, a comprehensive approach to solving ITBS includes hip mobility and flexibility work alongside foam rolling. But stick to foam rolling the posterior and lateral muscles of the hip instead of grinding away on your lateral knee.

Here are the five key strengthening exercises that'll help you fix your ITBS and end the pain.

1 Knees-Bent Side Plank with Hip Lift

2 Side Plank With Hip Lift

If you can tolerate your bigger lifts without compromising or compensating form, use these exercises as warm-ups, on off-days, or in between sets of bigger lifts.

I recommend strengthening your adductor/inner-thigh muscles, hamstrings, quads, and core. Also, make sure to get regular doses of hip mobility exercises, dynamic stretching, and soft tissue mobilization of the upper hip muscles for a comprehensive approach.

Working through some discomfort is appropriate, but avoid pushing past 5/10 discomfort while you do the exercise.

Note: This is not medical advice. 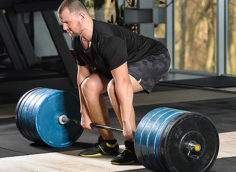 In love with deadlifts? Here's why you might want to think about doing some other exercise for your posterior chain.
Training
Christian Thibaudeau February 10

A single "squat day" isn't going to cut it anymore. Bring up your Olympic lifts by starting every workout with squats. Here’s how.
Squat, Training
Wil Fleming June 20

Busted-up veteran lifters often have to abandon the back squat. But they may not need to. Try these variations to keep the leg growth coming.
Squat, Training
Ben Bruno October 11