When it comes to lifting a barbell overhead, there are several options to choose from, from the simple shoulder press for hypertrophy to the technically complex jerk. But somewhere in the middle of that complexity spectrum lies a lift everyone should be doing: the push press.

From a physical standpoint, the push press helps to develop a strong and stable trunk while also highlighting gross deficiencies in mobility. It’s also a good way to train relatively heavy loads overhead in a strength-endurance format. The lift’s dynamic nature and its recruitment of the lower body and trunk make it a great way to push heavy rep schemes up past 15 reps.

The push press offers a less than optimal eccentric or negative phase, which somewhat limits its ability to increase overall muscle mass.

Some lifters also use the push press as a metabolic conditioning tool. This is a bit misguided. The lift is fairly complex and it might cause injury when done incorrectly in a depleted and hypoxic state.

The grip width for the push press should be just outside the shoulders. If you have large biceps or a tough time externally rotating your shoulder, try a wider grip. 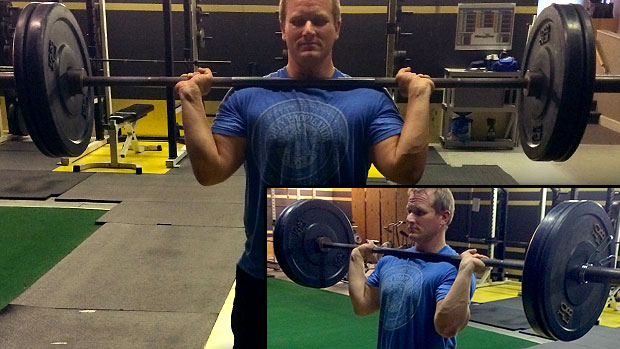 Now, some lifters start their push press with the same rack position used for a standing shoulder press. This positioning is patently incorrect since it places the body at a mechanical disadvantage while increasing the potential for a shoulder injury. 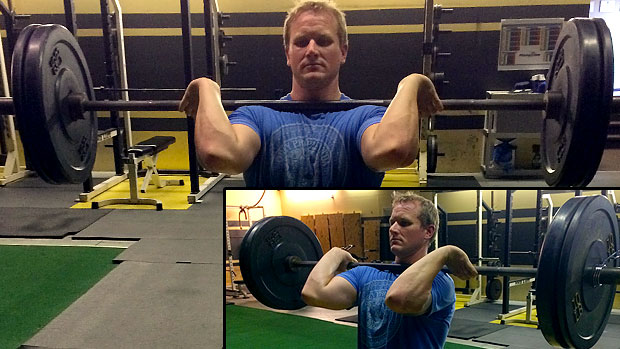 Unlike the press, the push press requires the upper arm to be parallel to the floor, similar to the position used in a front squat. The wrist will be slightly cocked with the barbell well gripped. With that said, some athletes with poor shoulder and thoracic spine mobility may need to let the barbell roll to the tips of the fingers in order to get in a solid lifting position.

The push press, unlike the press, uses the lower body and trunk dynamically to get the barbell overhead. This requires us to focus on the set-up a bit differently than the press.

The goal with any dynamic overhead movements is to maintain a stacked spinal column while exhibiting force throughout the lift. This is best achieved by taking a wide stance with the feet slightly-externally rotated (toes out a bit). Although it varies from person to person, most should take a stance similar to their front squat.

Many lifters have difficulty with this because a narrow stance often feels more powerful. However, unless you have outstanding ankle flexibility, it’s difficult to prevent the torso from shooting forward in the drive phase of the lift with a narrow stance. It’s also difficult to wind up and subsequently release the stored energy through the stretch-shortening cycle of the hip while employing a narrow stance.

It’s important to remember that the dip-drive phase isn’t a one-fourth squat. It’s a shallow and violent redirection of energy from your body to the barbell, a lot like the split second before impact while tackling someone in football.

Always take a large belly breath and hold it prior to the dip and drive. This will help protect the lower back and also help you to transfer energy from the legs through the trunk to the barbell.

When starting the dip, slightly flex at the knees while pushing them out like you would in a squat. This movement should occur quickly. Remember, it’s a shallow and violent movement. The push press relies heavily on the tension of your musculature in order to generate force. If this phase looks slow and sluggish then you’re doing it wrong.

The drive phase is simply a redirection of force. This action is largely dependent upon creating tense musculature throughout the legs and trunk while quickly extending the knees, ankles, and hip. Drive through the heels during this step! You may ultimately end up on the forefoot or toes, but that should be a symptom of natural kinesthetics, not a contrived effort.

Once you initiate the drive, the barbell should hop upwards with some zip. It’ll become weightless for a split second before reaching its apogee. Unlike the jerk, this is where we need to use the upper body to finish the lift.

During the weightless phase, you need to finish the lift by rotating the arms into a position similar to that of the press. The forearm becomes upright and the wrist rotates into alignment with the forearm. At this point, tightly grip the bar and press it directly overhead.

Once the bar is locked out and your feet are flat and stable, you can lower the barbell back to the original rack position. During this phase, it’s important to absorb the weight of the bar by flexing at the knee and hip as the load descends to the shoulders.

A Pathway to Olympic Lifting

The push press is a very specific training tool that may not match up with every lifter’s needs. Like some things in the strength and conditioning world, this lift has a very specific purpose and user outcome will be dictated by how this tool is used in training.