Andy Bolton has pulled over 900 pounds in more than 30 competitions. Pulling over 900 is something only 13 other men have ever been able to do, and only one of them exceeded 950.

Most impressively, however, is Bolton's TITLE as the first man to break the 1,000-pound deadlift barrier. He initially broke it with a lift of 1,003 and eventually topped his own record with a beastly 1,008-pound pull.

Bolton's also built his squat to over 1,200 pounds and he recently set the British bench press record at 754. Up until recently, his bench was his weakest lift.

This article describes how he fixed it and set the new record.

Whilst this bench press still lags someway behind my squat and deadlift, it represents extremely rapid progress for me.

To be exact, I have gone from 692 lbs. to 754 lbs. in around 6 months. This equates to more than an 8% improvement and this represents fairly special progress (for an athlete of my standard) in that timeframe, especially when you consider that I'd been stuck at (or in reality, below) my previous PR of 692 lbs. for several years.

It's this progress that has prompted me to write this article and show you exactly how I trained so you can use the ideas to help your own bench press training.

Before I get to the meat of the technical improvements and programming that have accounted for my recent bench press success, I just want to reiterate that it is not for the want of trying that my press numbers stayed stagnant for so long.

I tried many many things over the years. I had help from coaches (of the highest calibre) from all over the world. I tried benching more, benching less, using accommodating resistance, benching once a week, benching twice a week, lots of assistance, little assistance.... You name it, I tried it.

But nothing worked. I was stuck.

Luckily, my mind was strong and I knew that if at first you don't succeed, you just keep tweaking your strategy until you do. Bill Crawford, of Metal Militia fame, is the man who finally helped me improve my bench in a significant way, and I know the ideas will work for you, too.

So, pay very special attention and you too might see your bench go through the roof.

I thought I had good form on the bench and never imagined that a few technical tweaks could make such a difference. Bill Crawford made me see reality.

The major change I made was to my stance. I used to bench up on the balls of my feet and with my feet very close to the bench. The outcome of this was that when I un-racked the bar, I was about as stable as a canoe with a cannon in it!

Bill had me stay up on the balls of my feet, yet place my feet as wide as I could get them. This instantly improved my balance and stability and gave me a much more stable base to press from.

I will not bore you with every tweak we made to my technique because there were many. However, I will list below some key points you should practice each and every time you bench, regardless of whether you are a powerlifter, bodybuilder, or athlete competing in another sport.

The reason I say this is because with improved technique, you will not only be stronger, but less likely to injure yourself!

5 Things You MUST Do Every Time You Bench Press
(If You Want To Press BIG!) 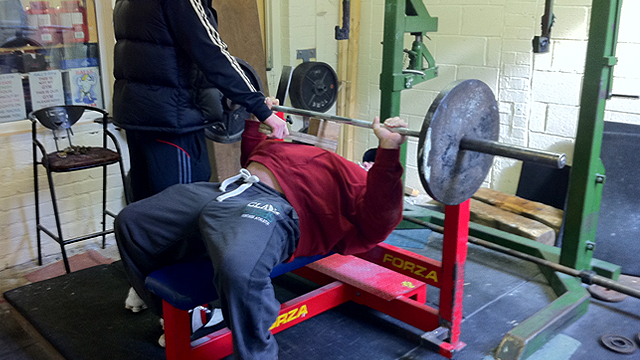 For the past few months I have benched on Monday and only Monday. That's right, just once per week. Each session has lasted 2 hours and has included 4 pressing exercises and some light rear delt work at the end of the session.

My lat and upper back work is done separately on a Thursday and usually consists of pull-downs, rows, and shrugs. I have totally eliminated triceps extensions of any kind. They beat up my elbows but did not help my bench.

Remember, every athlete has a limited ability to recover. If you exceed this limit you will enter the realm of over-training and your progress will stop.

In essences, my new bench program got rid of what I found to be useless (extensions) and added in more of what I was trying to get good at – bench pressing.

I think Bruce Lee sums up my approach to training perfectly:

Trying to add more bench pressing without removing something else would not have worked as I would simply have exceeded my ability to recover.

I currently use 4 pressing exercises:

The purpose of each exercise is as follows:

This is to get me ready for putting my shirt on. (Wearing the shirt from the start of the session is not an option because it doesn't allow me to touch until there's way over 600 lbs. on the bar.)

Tip: don't burn yourself out with light weights. I rarely do more than 5 reps on my warm up sets, even with 95 lbs.

This is how I compete, so it makes perfect sense to practice this exercise every time I train. I used to do a lot of board work but Bill got me touching the chest every session. This made a huge difference come meet day.

This movement is to strengthen the triceps. Working off 4 and 5 boards allows you to just concentrate on the top few inches of the movement. This is great for both raw and equipped bench pressers.

It allows the raw guys to feel heavier weight in their hands than they could handle through a full range of motion, and therefore get the central nervous system accustomed to handling heavier weights.

On the other hand, board presses allow equipped benchers to strengthen their lockout. A strong lockout is vitally important because the shirt helps most off the chest and gives virtually no aid on the last inch or two near lockout.

Ever wonder why you rarely see a raw bench missed near lockout but you see lots of shirted benches miss an inch away? Wonder no more, now you know why: weak triceps. 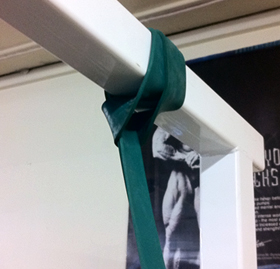 This movement also teaches violent starting strength and acceleration because the bar is getting heavier every inch you press it towards lockout. You do not have to think "be quick" when using this movement. Your brain will automatically start making you perform the movement faster once you have done a set or two.

As a frame of reference, jump stretch bands have the following general effect:

And that's how I set the British Bench Press record of 342.5kg.

Regardless of whether you bench raw or equipped, or even if your focus is another lift entirely, there is much to learn from what you have read here. And I'm sure you realize that so I'll keep this conclusion short and leave you to ponder 2 things.

The first is a question that you should ask yourself whenever you write a training program:

Can I justify why I am placing this exercise in the training program?

If the answer is yes, then fine, go ahead and use the movement. However, if the answer is no, start over and make sure you are doing what is necessary to achieve your goals and not a bunch of worthless exercises that do nothing but eat into your recovery ability.

Ivan Abadjiev, the greatest Weightlifting Coach of all time, took this principle to the extreme. By the time he had finished with the Bulgarian weightlifting team of the 1970's and 1980's, they used just 5 exercises in preparation but won 9 Olympic Gold Medals and countless medals in the World and European Championships.

To say they were successful is an understatement.

What they realized was that if you want to get good at something, do that something. And do it A LOT.

They did it with weightlifting and produced magical results, and I've done it with my bench and gained in a way that I didn't think was possible. Consider S.A.I.D the next time you write a training program. 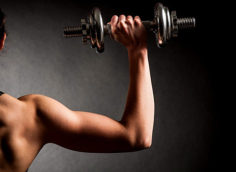 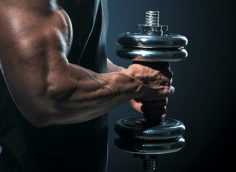 You don't need a garage full of gear for this workout. In fact, all you need is one dumbbell.
Training
Dr Sam Spinelli April 15 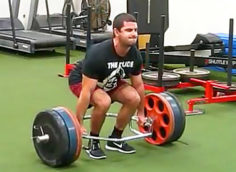 Turn this lift into a quad builder with a closer stance. Keep the hips down and chest up to keep the stress on the legs and off the back.
Deadlift, Exercise Coaching, Powerlifting & Strength, Tips
Ben Bruno July 31