If you're used to frequent trips to the gym, you may think two weeks away from it will turn you into a stick figure. But that's not a realistic picture of the relationship between time off and lost gains.

What happens physiologically when you stop training? How long can you press pause on lifting before size and strength start slipping away? What can you do to minimize that loss? Luckily, researchers have looked into these things and can give us a fairly good idea of what to expect.

The Science of Atrophy

Since muscle mass is a major metabolic expense for the body, the body is programmed to discard "excess" muscle when it's not needed. When you take a break from training, the stimuli that maintained your size and strength is no longer there and the body will begin discarding unnecessary, energy-consuming mass.

We know that hypertrophy is an active process, where strength training activates a number of anabolic pathways, and this stimuli is what causes a growth response. It was previously believed that atrophy was merely the opposite of this, meaning that atrophy was a passive process in the body, where the absence of physical activity did not activate these pathways. There were no known "atrophy pathways" or mechanisms, but around 15 years ago scientists began getting some insight into these processes.

You Down With UPP? Hell No.

The processes that initiate atrophy are the same, no matter what sets them in motion. Atrophy can occur as a result of calorie restriction, inactivity, metabolic diseases etc. The catabolic processes are referred to as proteolytic (protein degrading) and part of the response is the activation of the signaling pathway called ubiquitin-proteasome pathway (UPP).

Figuratively speaking, the activation of UPP puts small "destroy me" labels on muscle protein. The protein is then transported through a barrel-shaped tunnel where it's chopped to pieces and spit out as amino acids. The two main villains in this bodybuilding nightmare are atrogin1 and muRF1.

Studies have been performed on rats where these genes have been eliminated, and as a result they observed a marked absence of atrophy. Since the discovery of these two villains in 2001, several accomplices have been found, including something scientists call erg1a.

The Catabolism Cure That Didn't Quite Work

Previously, there was actually an antihistamine on the market called Astemizole that would inhibit erg1a and therefore also acted as an atrophy retardant. Unfortunately, the formula also inhibited erg1a in the heart and caused heart problems. Astemizole was withdrawn from the market in 1999.

Scientists studying atrophy have since been working on further developing Astemizole to only affect erg1a in striated skeletal muscle and not the heart. And they're trying to find methods to dampen the erg1a gene and thereby the ubiquitin-proteasome signal pathway.

Body Fat, Tendon Strength, and Other Effects of Time Off

Researchers have found a decrease in the number of capillaries after 2-3 weeks of cardio detraining. They also noted a rapid decrease in the amount of oxidative enzymes which led to less ATP production in the mitochondria.

An increase in body fat is often seen during a training hiatus. As for lifting, you'll see a decrease in strength as well as a drop in tendon stiffness. The number of satellite cells may also go down a bit.

Generally speaking, the fitter you are, the bigger the drop in size, strength, and performance when you take too much time off from training. Why? Because it takes a huge amount of energy for the body to be extremely fit. Any chance it gets, the body will begin reducing its high-performance build to save energy.

Strength athletes seem to have an advantage over endurance athletes, as cardiovascular conditioning is lost more rapidly than strength and the ability to produce power.

In the table below, you can see the changes that occurred to an elite powerlifter when he stopped training for 7 months. 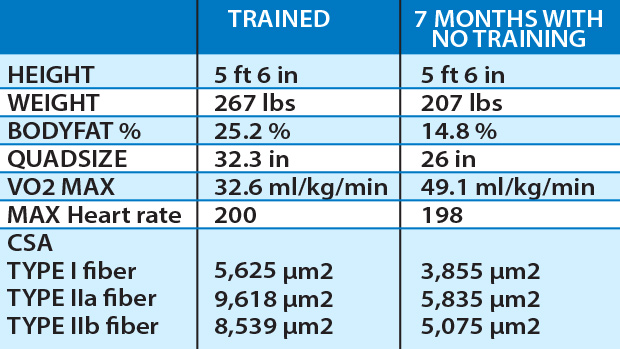 The powerlifter reduced his weight dramatically. This was due to a massive drop in body fat, but also a huge decline in muscle mass. His type II fibers shrunk in cross sectional area.

How Fast Do You Lose Strength?

The degree of strength you'll lose during time off will vary depending on your genetics, age, training experience, what muscle groups we're talking about, how much time you take off, and whether it's a complete break (no training) or a partial break (reduced training).

You'll certainly lose more strength the more time you take off. But taking off a week or two does not seem to matter much in the bigger picture.

Here's what else the studies show:

How Fast Do You Lose Size?

Since there's a correlation between strength and muscle fiber size, there will in most cases be a drop in mass alongside strength. However, it's believed that the loss of strength observed in the first weeks of non-training is primarily associated with a decreased neural drive – a weakening of the firing system of the nervous system, while a loss of muscle fiber size takes a bit longer.

Some studies have shown an onset of muscle atrophy as soon as two weeks after cessation of training. Other studies have shown that there's no atrophy after such a short period of time. As with strength, the degree of atrophy is probably closely related to how active you are during your break, and how fit you are when you go on a break.

This is worth repeating: more mass is associated with more pronounced atrophy. And the older you are, the more aggressive the atrophy seems to be. This might be related to the fact that younger people are generally more physically active than older individuals, and inactivity is one of the most important factors for the onset of atrophy.

In one study, participants increased the CSA (cross-sectional area of muscle fibers) in their quads by 10% after three months of training. But three months without training later, and all of these gains were completely gone.

In another study, participants experienced an increase in CSA of 26% and an increase in strength of up to 40% after participation in a 24-week strength training program. After 12 weeks without training, CSA dropped to baseline levels, but in same period of time, strength only decreased by 30%.

This indicates that the neural adaptations had not completely disappeared even though the atrophy was pretty aggressive. Under normal circumstances hypertrophy is more pronounced in type II muscle fibers when you engage in a strength training program, and it's also believed that type II muscle fibers atrophy more willingly than type I fibers.

Bodybuilders often have very large type II fibers, and unfortunately these are also the ones that will lose their size most rapidly. 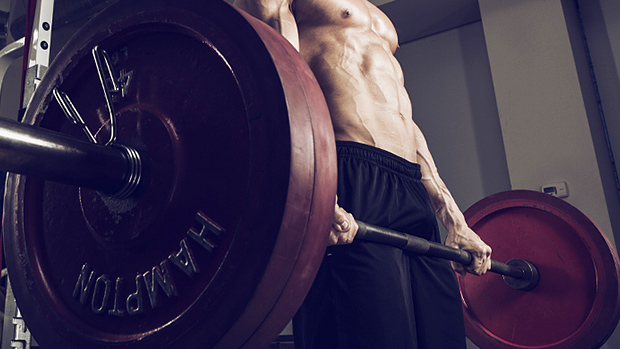 How to Minimize Your Losses

If taking time off from training is inevitable, there are certain things you can do to minimize unwanted physical changes:

1. Squeeze in just a little training if you can. Some training is better than no training.

If it's possible, there may be a lot to gain by training at a reduced volume or frequency during a break instead of complete cessation of training. Researchers have observed that a complete preservation of strength can be maintained with as little as one set of 1RM of a series of exercises, performed once a week. Studies have also shown that the gains achieved after training three days a week for sixteen weeks could more or less be maintained for eight weeks of training just once a week.

Another study has shown that the gains achieved after training two days a week for 21 weeks remained in the following 21 weeks... and yes, this was when training was reduced to 1-2 sessions per week.

If it's an option to reduce your training to one or two short sessions per week, you'll reduce your loss of gains dramatically when compared to a total training cessation.

2. Train heavier before taking time off.

After six months of training, the participants took a six month break from training, after which their bench press strength fell by 98%, 50% and 29%, and their leg strength decreased by 70%, 44% and 27%. The higher the intensity during training, the smaller the subsequent drop in strength.

3. Do some scheduled overreaching right before your break.

If you train the same muscles two to three days in a row before the break, or tear yourself completely to pieces with a hard 6-7 day training week, your break will actually serve as a much needed recovery period. Because of supercompensation, you may very well return to training stronger than before your break.

Do your wrist curls like this for Popeye forearms.
Arms, Tips, Training
John Paul Catanzaro March 29 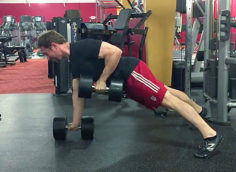 Test your strength and stability by trying these with bodyweight. Example: A 200 pound man should be able to use a 100 pound dumbbell in each hand.
Abs, Back, Exercise Coaching, Tips
Joel Seedman, PhD June 19
You like to look good naked. Your training revolves around aesthetics. You're a bodybuilder.
Training
Joel Marion December 14