Move over abs; traps are in style this season. Oh sure, a nice chiseled midsection is always cool, but how often do you have your shirt off in public anyway? If you want to really turn heads, then don't neglect the manta-ray shaped muscles that form part of your shoulders, upper back and neck. Even in a sweatshirt, muscular traps are what separate you from the rest of the couch monkeys. Picture WCW wrestler Bill Goldberg. Now you're getting the proper mental image.

There are several movements you can usae to train the traps. Upright rows, the various explosive pulling movements like cleans and snatches, as well as compound exercises like deadlifts all zap the traps pretty well. Most people, though, use simple shrugs, either with a barbell or a pair of dumbbells. They just hold some weight and shrug their shoulders up and down like one of those lamebrains on Who Wants to be a Millionaire? who misses one of the first questions. (Just don't rotate your shoulders or everyone in the gym will automatically know the extent of your dweebiness.)

Oddly enough, one of the first and most effective trap movements has been all but forgotten by modern gym goers. It's called the Hise breathing shrug, named after its creator and a man who some call the "Father of American Weight Training," JC Hise. (Who'd you think it was, Joe Weider?) Hise is credited by many as the man who started the whole "deep knee bend craze." Yep, he popularized the flat-footed squat back in the 1930's. Joe Hise is also the same sadistic bastard who came up with those deadly 20-rep breathing squats.

The traditional Hise breathing shrug is performed like this: Get your trapless torso into a squat rack or power rack and put the bar across your shoulders like you're about to squat. Instead of squatting, position the bar so that you can shrug the shoulders up and down. The "breathing" part comes in here. Much like heavy, high rep breathing squats, you should focus on a specific breathing pattern during the movement. As you shrug the bar up, visualize touching your shoulders to your ears, and inhale deeply. Pause at the top, and then exhale as you lower your shoulders.

Traditionally, Hise and his modern day equivalents over at the Westside Barbell Club use high reps and heavy weight. In other words, load the bar up with a weight you'd normally use for around ten reps. Using the breathing protocol outlined above, you'll now attempt 20 to 25 reps with this weight. No one paid much attention to tempo back in the 1930s, but a 211* speed of movement would be a good place to start. Yes, it's going to hurt real bad, it's uncomfortable even if you're doing it right, and you'll experience some intense soreness if you've never done this movement before. Suck it up, tough guy. You ain't readin' Men's Fitness.

A modern day variation of the Hise breathing shrug is done on the standing calf machine. Simply position yourself as you normally would in the pads and begin shrugging.

Where in your workout plan do you put Hise shrugs? Some train their traps on shoulder day and others hit them on back day. Ian King often suggests training the traps on hip dominant leg day, or after you perform deadlifts or power cleans. You're a big boy, train them wherever you feel is most appropriate for you. Note that if you choose to use the heavy, high-rep method, you'll only need one good set, especially if you perform them after deadlifts. If you use a normal approach, say, two or three sets of 8 to 12 reps, then you can do them on back or shoulder day. It's up to you.

Give Hise shrugs a shot. Then try to resist the urge to cut the necks out of all your T-shirts.

Sometimes success involves studying the habits of unsuccessful people and then doing the opposite. Here are five of their bad training habits.
Bodybuilding, Powerlifting & Strength, Training
Charles Staley September 20 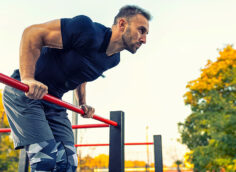 Build your entire upper body with this challenging bodyweight workout. All you need is a pull-up bar, a little practice, and a lot of grit.
Challenge Training, Exercise Coaching
Tanner Shuck December 19 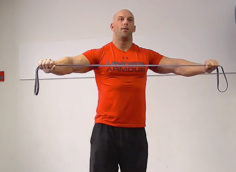 Use this variation of the band pull-apart to reduce soreness and pain.
Back, Exercise Coaching, Mobility, Shoulders, Tips
Christian Thibaudeau December 23