Hip belt squats are a unique exercise that first caught my attention through two published articles by John McCallum in the March and April, 1970 issues of Strength & Health magazine (yes, you whipper snappers out there, weight training and/or bodybuilding did exist before the Pumping Iron movie came out).

The articles, which were titled "Hip Belt Squat" and "The Hip Belt Squat Routine" (from the "Keys to Progress" series) praised this exercise as "...the absolute best for adding muscle bulk to the lower thighs." At that time, I, along with a whole bunch of other bodybuilders, didn't realize the impact that this exercise could have as a natural anabolic muscle stimulator. My focus and just about everyone else's in the Iron Game was on Arthur Jones and his exercise system using special Nautilus machines.

As such, it pretty much slipped by our notice, and everybody else's. In fact, decades have passed without much notice in regards to hip belt squats, but there have been six pieces published (from 1983 onward) and at least one television segment (ESPN's American Muscle, 1988) on this exercise.

For those of you who aren't familiar with the hip belt squat, I suggest that you consider purchasing the squat video from the Westside Barbell Club. This video features a powerful live-action demonstration of the hip belt squat. If you watch it, you can see how this potent anabolic blasting exercise can ignite the ultimate in thigh supergrowth – naturally.

Of course, you probably don't want to wait for the UPS man to make his delivery before you start doing this great movement. As such, I'll describe how it's done so you can start doing it today.

First, place two flat exercise benches (or very sturdy nontipping wooden platforms of the same height) to form a V-shaped configuration. When seen from above, the benches should be spaced far enough apart at the opened end of the "V" to accommodate the width of your selected squatting stance.

Next, place a sturdy chair or box midway between these benches. This will serve as your loading platform for the weight you'll be using. Choose the heavy dumbbell or barbell plate you intend to use and place it on the makeshift loading platform.

The combined height of the loading platform and the dumbbell should approximate knee height when you're standing on the benches.

Note: Though your center of gravity in the hip belt squat will be extremely low when compared to other squatting movements (such as the Olympic high-bar squat), don't expect to use herculean poundages. Rickey Dale Crain, who is acknowledged as one of the greatest squatters of all time, discovered that doing just 3 sets of 10 to 12 maxi-pump reps with 273-300 pounds in the hip belt squat was brutally rough on his bionic quads, hips, and hamstrings. Consider that he was capable of a "power-style" squat with well over 700 pounds at a body weight of around 175 pounds!

Next, step up and take a moderately wide stance of 18 to 24 inches astride the flat exercise benches and directly over the loading platform. The exact width between your foot placement is your decision. You must feel comfortable and safe. Position the *hip belt around the top of your hips and glutes. Attach a barbell plate or dumbbell to the hip-belt chain, positioning the weight so it fits snugly but comfortably near your crotch. Now come to an upright position, lifting the dumbbell off the loading platform. Have a spotter remove the loading platform.

*You can order a hip belt at IronMind.com or by calling Elite Fitness Systems, 888-854-8806. Alternately, you could just use a leather dip belt, which can be found in most hardcore gyms.

Laterally rotate your feet out 45 degrees from parallel. The subtle action of rotating the feet out when combined with an 18 to 24 inch heel-to-heel stance will place stress on the outer edge of the foot where the power is, rather than on the weaker inner side of the foot.

Your body should be in an upright position where the shoulders and hip joints are in alignment. Never bow or hump your back so as to collapse your chest. If you do, your balance and weight will shift to your heels and put more tension on the spinae erector muscles, which is a problem associated with many thigh and back exercises, but not with the hip belt squat. So why mention it, Yukon Boy? Because I want you to get into the habit of always assuming a *flat-back position with a slight inward arch in your lumbar region.

Keeping your chin high and parallel to the floor will help your center of balance.

One of the ways to acquire the correct feeling of a flat back with a slight arch is to sit upright on a stool or bench. Inhale deeply and try to elevate your chest as high as possible in an effort to touch your chin. When done correctly, it will automatically contract the muscles in the back so your spine and back feel locked into one solid piece. This technique was perfected by Tommy T. Kono, an eight-time Olympia weightlifting champion. Not only would he use this technique, which he coined the "pouting pigeon," in the manner described, but he recommended it be used prior to beginning the pull-in exercises such as snatches, cleans, and deadlifts. Tommy was not only an experienced Olympic lifter of world caliber, but he also won the FHIC version of the Mr. World and Mr. Universe physique titles. A bodybuilder would do well to heed his words of training wisdom.

Now prepare to begin your squat descent by inhaling. With your bodyweight evenly distributed, slowly descend with control down to about three inches above parallel. Later, as your strength and flexibility increase, you can break parallel by allowing the hip joint to descend below the level of the knee joint by approximately two to four inches – but never at the expense of knee-joint integrity. During this negative phase you might consider doing each rep at a slow, controlled speed.

During the squat descent, your knees and shins should remain in line, while your hip joint moves slightly forward. (Bring the hip joint as close as possible to the knee joint so that at the lowest point your hips are over the instep or middle of the foot.) The knees should never abduct (turn out) or adduct (turn in).

Upon completion of the negative phase of the hip belt squat, without hesitation, begin the ascent. Remember that even a .5 to 1 second delay can cause you to lose the valuable elastic muscle energy so necessary for the initial drive out of the power pocket. Remember to use a faster tempo on the ascending, or concentric portion of the lift.

Editor's note: Bodybuilders, or those who are interested in primarily building quad size as opposed to quad strength, might do well to take a pause at the bottom of the movement to negate the elastic, or plyometric, energy.]

Keep your back flat and your chest held high, and ascend by raising your head, then your chest and finally, your shoulders. If you push with your legs first, it will cause the hips to raise faster than your shoulders. This will cause your upper body to lean forward, thereby shifting your balance toward the heels.

Approximately one third of the way up you may hit a sticking point. Either you used too much weight or you rounded your back and inadvertently caused a leverage disadvantage. There are two things you can do if this happens. One is to drive the hips forward. If this isn't enough, use your hands to push off from your thighs to help bypass the sticking point. Spotting can also be done by having a helper on each side of the body. Each spotter places one hand under the hamstring and a hand under the chest to assist if necessary.

Sometimes balance issues other than a rounded back can be a problem, especially when the hips rise faster than the shoulders. If you don't have a spotter, it would be a good idea to position your exercise benches within reach of a stationary object such as a post, power rack, personal trainer's head, or parallel bars, etc. In this way you can reach out and grasp the object to help you through a sticking point. An added bonus here is that you can, by using an upright fixed object, maintain a very upright squatting position. This will create maximum muscle tension on the thighs and minimize stress on the lower back.

Begin expelling air from your lungs as you finish the upward positive contraction phase of the rep. Don't lock your knees out, though. Instead, keep continuous tension on the thighs by maintaining a 5-degree bend in the knee joint.

Pro Tip: When you feel your balance is perfected, you can place a wooden broom handle on the shoulders to simulate a squat bar. I mention this only because many hip-belt squatters, once they've mastered the movement, seem to prefer this method.

Pro Tip: Performing on an incline maxes out hips and hamstrings, while decline hip-belt squats really terrorize the lower quads.

Descending Levels of Rest-Pauses Between Each Set (in other words, if you're just starting out on this program, you're probably a level 1 and as such, will need between 2 1/2 to 3 minutes of rest between each set):

Stay at each level approximately one to two weeks before progressing to the next level.

That should do it. I think I've given you all the info you need to start doing this great movement, and I really hope you'll give Hip Belt Squats a go in your leg training workouts and reap the benefits of this "anabolic" equalizer. Stay flexed! 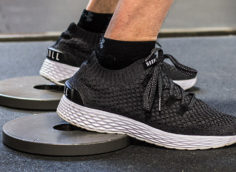 Will elevating your heels during squats make you injury prone, unathletic, or unable to do regular squats? Nope. Here's why.
Training
Nick Tumminello June 11