The deadlift plays a massive role in developing strength, power, and – when done correctly – injury prevention and overall resilience.

While there's no denying that the deadlift is a powerful strength builder, the waters become a tad murkier when talking about deadlifts in the context of high-rep sets. Relatively heavy sets done within the 1-5 rep range can create powerful adaptations, but going beyond that threshold is, at best, questionable.

1. Who are you kidding? Your technique isn't good enough.

In theory, you can get away with high-rep deadlifts if you can maintain good technique throughout the duration of the set.

Unless you were mistaken for the Hulk out of the womb, though, you probably can't. As Tony Gentilcore says, "The ideal rep scheme to teach deadlifts is in the 3-5 rep range. Anything more and technique goes into the crapper."

When pulling from the floor, it's hard enough to maintain optimal technique, full-body tension, and a strong brace for 1-3 reps, let alone 10, 12, or 20. Add in the laundry list of cues that accompany the deadlift – chest up, back flat, armpits over bar, neutral neck, vertical shins, etc. – and things get more complicated.

So there's a lot that needs to be dialed in and hardly any room for error. Combine all of that with a couple sets of, say, 12 reps, and things can get ugly quickly.

Assuming you're past the newbie stage, the deadlift doesn't do much in the way of hypertrophy in the first place. The downside of the deadlift is that most of the musculature performing the work is in an isometric/static position.

There's minimal time under tension and hardly any eccentric (negative) loading, both paramount for building muscle. Consider that there's no other exercise (outside of Olympic lifting) where you just drop the weight.

As Paul Carter wrote in The Big 3 Suck for Size Gains, no eccentric means no growth. Putting on muscle with the deadlift gets even more unlikely when you go high-rep.

There's no other lift that's as devastating on the nervous system as the deadlift.

If frequency and volume are kept in check, the systemic fatigue that occurs after deadlifting is a normal (and necessary) part of the adaptation process. In the context of high-rep sets, though, the deadlift takes a lot more than it gives back.

If volume skyrockets, the factors above that contribute to a fried nervous system are amplified. Pair some deadlifts with a couple of AMRAP sets and the inevitable sloppy technique, and you'll wake up the next day feeling as worthless as a pool noodle in a gun fight.

4. High reps or not, conventional deadlifts aren't for everyone.

When manufacturers began producing standard 45-pound plates, they mapped out the design so that the barbell would sit 8.75 inches off the ground. The rationale? If a lifter missed an overhead lift and got pinned under the bar, 8.75 inches would provide ample room to prevent his skull from being crushed.

The bench press's range of motion depends on the length of an individual's arms and the size of his chest, while squat depth is determined by height, leg length, and an individual's mobility (or lack thereof).

As it applies to deadlifts, though, it doesn't matter if you're a hobbit, Sasquatch, or anything in between. You're pulling from the same 8.75" as the next guy. The reality is that some people simply lack the ability to pull from the floor with a neutral spine.

A lot of lifters can reap ALL the benefits of the deadlift by using a setup like this:

More info on that in The Deadlift's Dirty Secret.

Unless you're a competitive powerlifter or weightlifter, who cares? High reps or not, getting bigger and stronger doesn't require deadlifting a barbell off the ground, nor is it a mandatory initiation process that opens the door into the meathead world.

If you really want to do all the things you thought your high-rep deadlifts would do, switch to the trap bar deadlift and get happy. Here's why:

The trap bar deadlift is a significantly easier lift to learn and perform well. The linear bar path and higher handles enable beginners, taller lifters, and individuals with mobility restrictions to train the hinge pattern without force-feeding a deep position.

Lower demands from a technical standpoint mean a number of things: less risk, faster recovery times, the capacity to use heavier loads or perform more reps, and the ability to do more total work without hindering future workouts.

Since the trap bar is aligned with the body's center of mass (as opposed to in front of the body), there's significantly less shear force being placed on the spine. This has three direct benefits:

Together, these benefits make high-rep deadlifts a feasible approach, as long as they're done with a trap bar.

The trap bar deadlift is one of the best muscle-building exercises. It's the ultimate hybrid lift, combining the best of the squat pattern with the best of the deadlift pattern, but without the inherent risks of each. Although the bar is lifted off the floor, the movement pattern looks more similar to a squat. The primary benefits are threefold:

The trap bar deadlift recruits the entire musculature of the lower half – as well as the traps, upper back, lower back, abs, and forearms – while simultaneously sparing the joints and mitigating risk.

Add in the fact that the quads are actively involved in controlling the movement's descent, and the result is more time under tension and greater eccentric stress, regardless of whether you're going low rep or high rep.

4. The trap bar deadlift is a helluva' lot safer.

Most importantly, the trap bar makes it considerably easier to perform high-rep sets – and thus, build more muscle – in a safer, simpler, and more joint-friendly manner. Since it's easier to maintain a solid brace due to the high handle position and the linear bar path, there's less of a need to reset and regain tension before each and every rep.

Assuming you're able to pull from the ground with a neutral spine, incorporate both deadlift variations into your training. Perform conventional deadlifts within the 1-5 rep range to build absolute strength, and then use that newfound strength to pack on muscle (and additional strength) with high(er)-rep trap bar deadlifts.

Abs are made in the kitchen... and at the cable machine. After all, you have to build them too in order to see them. Check out these exercises.
Tips, Training
Bret Contreras July 3
How to Maximize Efficiency in the Gym
Training
Joe DeFranco February 20 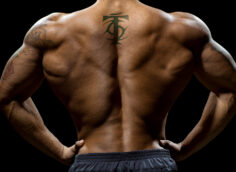 The seal row challenges you with a full range of motion and prevents cheating. Get horizontal and your upper back and lats will explode.
Back, Bodybuilding, Exercise Coaching
Bradford Cooke January 23 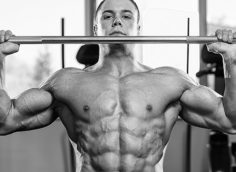 Test your mental and physical strength with this brutal (and fun) approach to supersets.
Training
Dan North September 8