Way back in 1995 or so, a fresh-faced Canadian strength coach named Charles Poliquin, wearing the native moose fur and antler hat that is emblematic of his countrymen, gave me an article (written on maple leaves) about something called "German Volume Training."

I cast aside my initial perceptions and read the article. It was good.

I ran it in the very next issue of Muscle Media 2000, the iconic but long-defunct bodybuilding magazine.

The article created a huge stir. The concept was easy to digest and it was wickedly effective at putting on muscle, fast.

The goal of the program was simply to perform 10 sets of 10 of a given exercise. 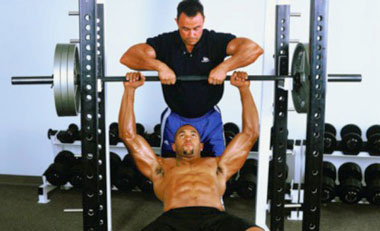 Charles Poliquin, seen here attending to one of his athletes, popularized GVT.

Let's say your first movement is the bench press. You'd want to pick a weight that you could do approximately 20 times. For most people, this would be about 60% of their 1RM.

You begin by doing 10 reps with that weight. Rest 60 seconds and perform another 10 reps. Continue in this manner, without changing the weight, until you've performed 10 sets.

Keep in mind, however, that if you actually complete 10 sets of 10, you chose a weight that was too light.

Ideally, a 10-set progression would look something like this:

* Oftentimes, you get a neurological rebound effect at set 7 or 8 where you actually increase your reps again.

Once you did achieve 10 sets of 10, however, you'd increase the weight the next workout.

Poliquin recommended that you use the method for only one exercise per body part. For instance, if you were working chest, you might do 10 sets of 10 of bench press, followed by perhaps some incline dumbbell presses and flies done with a more conventional sets and rep scheme, i.e., 3 sets of 10 reps.

The program has been tried by tens of thousands of weightlifters, bodybuilders, and athletes, almost always to great effect.

Even though it is, by weightlifting standards, an "old" program, it's still worth doing. Testosterone Muscle contributor Christian Thibaudeau refers to GVT this way:

"GVT is kinda like an old girlfriend that you can go back to for a booty call when you're not in a relationship. It's not new, it's much less sexy than it first was, but it still gets the job done.

"Just because a program is not the 'flavor of the month' anymore doesn't mean that it lost any of its luster."

Poliquin explained that the program works because of the law of repeated efforts. In other words, you do enough reps of an exercise, even at a weight that's submaximal, you iz gonna grow.

Bodybuilder Scott Abel, while not specifically addressing GVT, explained the phenomenon in terms of "total units of power demand."

Let's assume you just did 10 deadlifts with 225 pounds. You probably lifted the weight 2 feet, and you probably did each rep in about .8 seconds. If you take the formula for power (power equals force times distance, divided by time, or P=Fd/t), the total units of power produced in one rep is 562.5, which, if multiplied by 10 (the number of reps in the set), is 5,625 units of power generated.

Contrast that with a near-max set of 365, done for 2 sets, but at a substantially slower rep speed, around 2 seconds. The total units of power generated for that set is only 730!

Contrast that with a typical pyramid-scheme deadlift workout, where you might start with 10 reps with 135 and gradually climax, four or five sets later, with a set of 2 reps at 365. The total units of power generated would probably be about a fifth — and I'm being charitable — of the GVT-style 10 sets of 10.

Granted, units of power generated isn't the end-all and be-all concerning hypertrophy, but it's definitely a factor.

When Scott Abel first presented these numbers, he was making the case that "max loads have little to do with how much weight is on the bar. Max loads are relative only to performance of those loads."

As such, our main take-home point was that the more power units generated, the greater the adaptive demand and response.

Of course, this applies mostly to hypertrophy, and not necessarily strength.

But even though I've been trying to present a case for GVT, my goal isn't necessarily to convince you to train entirely this way.

Remember a few months ago, when Biotest revealed its "Third Law of Muscle"?

In case you don't remember, here it is:

The 3rd Law of Muscle: To guarantee the greatest gains from training, consume the precise compounds required to fully fuel, protect, and reload muscle — which can only be done immediately prior to, during, and immediately after training.

Our point was this: if you follow the third law (in conjunction with laws one and two, which consist of a good program and allowing adequate rest), you can blow almost everything else and still make good gains. Yeah, that's right, we believe that if you follow the three rules, you can virtually spend all day eating crap food and boozing and womanizing and Lord knows what else you do, and still make gains.

Granted, there's a limit to how much abuse your body will tolerate, but our point remains: if you fulfill your body's nutritional needs before, during, and after the workout period, you'll make gains. You'll win the physique battle.

Well, I've got a similar concept that can be applied to training, and it involves GVT. It's something I've been trying on a number of guinea pigs, each of whom seems to be getting suspiciously bigger.

• Hardly any regular Joe has his training completely figured out.

• Hardly any regular Joe makes noticeable progress in the gym.

• It's difficult, when giving equal time to each body part in a training program, for muscle growth to occur.

• Most people lack the expertise to correctly analyze their current training program to make up for their individual physical shortcomings.

So I've come up with a simple remedy. Keep doing your current program — whatever it is — but with this simple change:

Sure, throw in your usual leg extension or leg press finishers, I don't care. It's all good.

But adding in this simple protocol will fix what ails you. Everyone knows squats and deadlifts are hugely effective in packing on muscle, but most people do three or four sets in a pyramid fashion, and sadly, according to Abel, they don't generate enough power units to cause an adaptive response.

Poliquin himself approved the approach I laid out to him, offering the following support/explanation:

"Most people fail to make gains because of not doing enough 'most bang for your buck' exercises, i.e., the exercises that recruit the most motor units.

"An exercise is only as good as the time it takes you to adapt to it. Provided you use enough load for enough time, all exercises can build muscle. It's just that some are better at it than others. It has to do with what the German strength physiologists call the scale of motor-unit recruitment.

"The more you stick to what we were designed for as animals — lifting rocks, carrying carcasses, and generally just fighting against gravity — then the better off you are.

"What that means is using free weights over machines. Large compound movements for multiple sets should do the trick, as in German Volume Training. You cannot beat deadlifts and squats for that manner, plus they are associated with greater production of anabolic hormones."

What Poliquin is suggesting, of course, is that the cumulative effect of adding these two movements, done GVT-style, is total body growth.

Adding GVT-style squats and deadlifts will thus turn any lackluster, no-effects program into an effective one, and a good one into a great one.

Q & A with one of the world's premier strength coaches.
Bodybuilding, Powerlifting & Strength, Question of Strength, Training
Charles Poliquin March 24

Q & A with one of the world's premier strength coaches.
Bodybuilding, Powerlifting & Strength, Question of Strength, Training
Charles Poliquin December 24