People often ask me how long I've been teaching and coaching. I like to say, long enough that I have stories that start with kids who are teenagers and end with them contacting me as they approach their fiftieth birthday.

I was handing back a test one day and I heard two high school "dancers" whisper about what a bitch Miss X, along with some comments about her "fat ass."

Unbeknownst to the two girls – or anyone – was that I was dating Miss X at the time and, well, you can trust me that the issue was overstated. (That said, further comments by me on this particular supposedly large body part will be reserved for the good of my marriage to Tiffini, who was not the lovely Miss X. )

Ten years later, I'm locking the door to the school and I hear a squeal, "Mr. John." I didn't recognize the two figures running at me as the sun had been momentarily eclipsed by the effects of years of feeding off beer and pizza. Let's just say if there's such thing as a "Dharma Boomerang," the universe had hit those two girls right in the posterior.

Anyway, I've been around so long that my former students use some of my old assignments to teach their classes today. One such assignment that's worthy of anyone's time is called, "My Life is My Message."

It was intended as a way to ask questions of the students that made them think about who they are today and how that should impact their future.

It starts off simple, like "What are your ten favorite movies?" My list is updated every few years, but here's the exact list from a couple of decades ago:

I also ask for top ten books (if you're a book lover looking for a future spouse and your betrothed has never finished ten books, well, there's a red flag for you), top five albums (Miles Davis's "Porgy and Bess" and Frank Sinatra's "A Man Alone" make my list), and, from the insights of Sean Greeley, I now ask for Ten Favorite Meals (not foods, the gatherings).

The assignment culminated in a ten-year plan. Students instantly realized the burden of debt, the importance of getting degrees, traveling as quickly as possible, and taking care of one's fitness and physique. Sadly, not everyone follows the logical and right path.

I've had more than one student tell me, "I was smarter at 17 than 27." This is a form of goal setting and it's like mining a vein of pure gold for your chances of success in life.

I made my mark in the industry helping people look at the big picture in goals, and I'm proud that many people think I'm a "go to" guy for goal setting. To that end, I'd argue that a third of my articles here at T Nation are goal setting in general.

But, as good as the toolkit I offer, I've recently discovered that I'm also an idiot.

I had great ideas, excellent programming, and some nice technical tidbits that worked for everyone. For the squat, I had progressions that I humbly believe changed the world of lifting forever.

Well, at least, I thought they were working. I discovered recently that I was saying "this" and people were hearing "that." I thought I was making a point, but people were disconnecting and hearing something else. 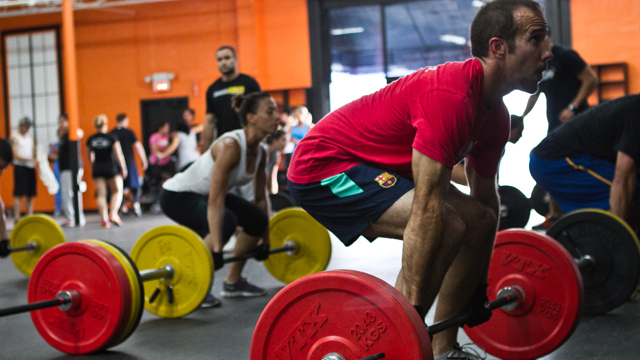 This program is all about getting people to their goals. The cliché goes, "If you don't know where you're going, any road will get you there!" I also need to add the old Irish joke: "I need to get to Dublin. Can you show me the way?" "Well, I wouldn't start from here!"

This was the disconnect. I was expecting people to know where they were going and, at least with my serious people, exactly where they wanted to go (Olympics, Super Bowl, 10 percent body fat, etc.).

Since many knew exactly where they wanted to go, I got full of myself and convinced myself this was the norm. But many, as I soon learned, had no concept of where they were heading, so my advice was just "another road."

I'm reminded of math class, by far my weakest subject:

"The shortest distance between two points is a straight line."

With the group that knew exactly where they were headed, success is like the math problem. The fastest way from Point A, where you are, to Point B, where you want to get, is a straight line. My athletes always seemed to know that they wanted to go to Point B!!!

The issue is, sure, they knew about Point B. Point A, where they are right now, was sometimes a deep mystery.

So welcome to my approach to coaching those with clear goals. Simply identify where you are right now.

Some laugh at this. "Um, isn't that obvious?"

Really? Consider this: I've had people realize that their short-term goal needed so many new skills that they simply didn't have enough time in the day to learn them all.

So, these people were asking for my advice – and I should say, my "expensive advice" – and having no idea about what they wanted to get from the conversation. And the result was, I couldn't really help them.

I'm sorry, but if you're going to listen to every voice in the wind, I don't think I can be one of them. One can easily find a new diet and weight loss idea every day of the week in magazines and on the internet.

I often note, "I didn't get enough food on this new diet, so now I'm on two diets." Well, if you don't know your goal, following two diets at once is probably just as good as anything else I can encourage you to try.

This approach, my friends, is all about discovering where you are. Now, since this is also the first question that God asks Adam in Genesis, I have to be a little careful about treading on copyright violations.

Once we mapped out "Point A," we discovered a straight line. Now, it might seem to be longer than the time allotted for the original goal, but at least we can honestly begin walking down the path to success.

When I've worked with some wonderful ladies, they have the exact opposite issue and the honesty brings them to tears:

It's hard to hear, to be honest. But, this clarity about where they are, Point A, is stunning. They know that they need to exercise and eat better.

Welcome to the Disconnect. Most people know Point A (I'm fat, need to exercise, and need to eat better), but Point B is the issue. These fine ladies see the photo-shopped images on fitness magazines and think that it's Point B. 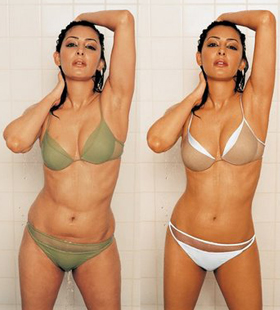 Recently, a young singer released a before and after photo where her legs got longer, her waist came in, and her boobs got bigger – yet this all happened in the artist's studio.

Folks, Point B is the issue for most of us. We're living in this odd time where photos of hyper-fit females with both genetic gifts and serious augmentation for any missing blanks dominate the fitness industry. This, frankly, is Point Z for most, not Point B!

I applaud the work of Josh Hillis, among others, that have been using realistic body fat pictures to help clients find their goals. As Josh tells me, 19% body fat percent for a woman is "rock star" hot, but 25% looks fantastic, too, to be honest.

Sadly, our industry uses photoshop, vomiting, and surgery to achieve the illusion of health and fitness. We need to take Josh's advice and show some reasonableness.

So, here's our triple-edged sword that must be addressed:

Missing this point has muddled my whole career. This is why we need to do assessments early and often like the FMS (Functional Movement Systems), taking "before" pictures (so you can take "after"), basic strength tests, and a few others.

This is why we need to have food journals and some kind of proactive calendar work to let our clients know that things are coming up that will impede progress or training, and some other things are easing up so we can accelerate to our goals.

We need to know "where you are."

When Pavel first introduced me to the concept of Easy Strength, the program freed up a lot of time, energy, and intensity so I could work on the other qualities that were demanded of me as a thrower.

I realized that I had the weightroom "locked down," but needed more correctives (I'm Mr. Asymmetrical, Novice Class, Open Division) and some technical throwing issues addressed.

When I work with almost everyone else, addressing poor squat technique and lack of loaded carries makes a near-immediate difference in their bodies and ability to train. But for me, easy strength – or even easier strength – is how to best get to Point B.

But you need to assess! Some will need focused time in the weightroom retooling and re-schooling the issues, then, we can get back to the issues of technique, tactics, and all the other tools.

With our friend who has no vision of where to go besides those celebrity diets that invade the checkout line at the store, we need to show them a reasonable path to success. It might be food preparation, shopping skills, movement issues, or whatever. It also includes realistic "next steps" and, even more important, realistic goals.

It's a lesson I've learned over a long time in the business.

You don’t have to be an Olympian to do these. If you want to burn fat, increase power, and gain athleticism, master these lifts.
Training, Weightlifting
Lee Boyce December 26

Looks easy, hurts really bad. Use this one as a warm-up or finisher. Check it out.
Metcon, Tips, Training
Lee Boyce March 6

Keep your back healthy by adding this feel-good move to your workout.
Back, It Hurts Fix It, Tips, Training
Lee Boyce April 11