I love the mental aspect of competing. It's almost become my forte, and in recent years has been a critical factor in me being victorious over the competition.

It wasn't always this way. Psychological weakness was the main reason I didn't have more success as a high school athlete. I can recall being pumped and excited the whole week leading up to the meets, but when it got down to the last few minutes before the match, an overwhelming fear would wash over me. I'd wish I was anywhere but where I was.

It got so bad that before big wrestling tournaments I'd hope for byes through the first round or two. My junior year coach even chewed me out once for emphatically shouting "yes!" when he told me that I'd secured a first-round bye. He said the team needed my wins for team points and wanted me to wrestle as many matches as possible, whereas I was happy to advance without having to wrestle.

Even worse, I'd often psyche myself out before my matches would even start by focusing on my competition instead of my own skills. If I felt a particular wrestler was really gifted I'd go into the match not even attempting to win, but rather just do well enough to avoid being embarrassed. Looking back it shocks me that I ever allowed myself to think that way.

I finally started to see the flaws in this way of thinking when, after a particular tournament, I saw that I had easily beaten a very tough wrestler but lost to another kid that wasn't even on the same level. It turns out that I had gotten the two wrestlers mixed up!

I realized then that I had won and lost those matches simply because I had already decided the outcome ahead of time – and believed wholeheartedly that I knew how they would turn out. I learned a valuable lesson that day: that the expectation of success was a big factor in actual success.

Following high school I began to focus on only thinking positive thoughts about my competitions. I would imagine achieving my goals repeatedly, and would envision the entire competition from start to finish in painstaking detail. If I ever allowed doubt to creep in I would start the entire process over and repeat it until I only saw success.

This process of envisioning success increased my confidence, calmed my fears, and reduced my anxiety about competing by giving me a strong sense of control. This was the beginning of a process that after much time and effort eventually led to the development of an extremely high level of self-confidence in competition.

The Marine On the Edge 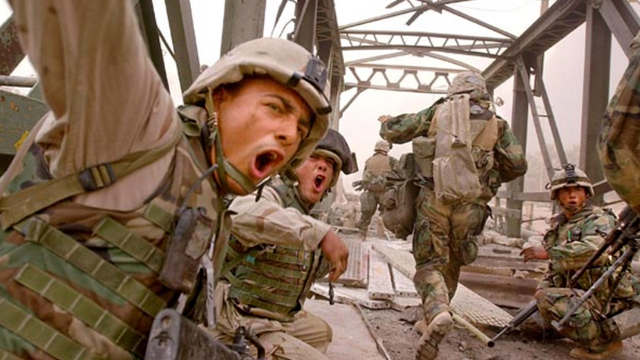 I continued to learn about controlling my psychological state while in the Marine Corps. One key technique was learning to control my nervousness by turning the nervous energy into aggression, which was a huge step for me mentally.

Before that I was often too nice when competing and lacked a real "killer instinct," but by the time boot camp was over I had learned how to bring out my "dark side" at will and use it to my advantage.

I learned how to channel nervous energy into aggression and rage, and how to focus and control it. I continued to hone this skill over my next four years in the Marines, eventually reaching the point when I could turn myself into a berserker at the flip of a mental switch.

Unfortunately, while this worked well for things that required a short burst of aggression, it wasn't effective for all-day competitions like a powerlifting meet. During early powerlifting competitions, often I'd be emotionally and physically spent from being too jacked up for too long by the time deadlifts rolled around. I then began working on learning how to relax and calm myself to conserve my energy during competition.

To relax myself, I practiced taking my mind to a calming place. Over time I learned how to block out everything going on around me and just focused on being "elsewhere," psychologically.

I've always found water to be very calming, so I'd picture myself near lakes, rivers, and oceans to relax my mind. I would focus on hearing the waves, smelling the scent of the water, and feeling its wetness. Over time I was able to reach the point where the sensations became very real, and the more lifelike you can make the images, the more relaxing they'll be.

A lot of athletes have difficulty relaxing in the weeks and days leading up to major competitions. The techniques and strategies for dealing with this type of anxiety have to be different from what's used for shorter periods of time, such as on competition day.

When you have time on your hands it's often difficult not to obsess over an upcoming competition, especially if it's something very important to you. Many athletes will think about an upcoming event incessantly, which is not only psychologically draining, it often affects the athlete's ability to sleep well.

For this scenario, it's often more effective to engage in a form of psychological escapism. Now I'm not referring to any type of medicinal therapy, whether it be prescription or otherwise. Not only does this approach not solve your true problem, it also has many inherent downfalls, the most serious being dependence and addiction.

I do not like anything that chemically alters my psychological state whether it is for relaxation or for stimulation. These are both mental states that you can train yourself to enter at will.

The form of escapism I'm referring to is simply something that requires your mind to focus elsewhere and allows you to relax. Reading books and watching movies are two forms of escapism that I've used effectively; other techniques that can work are engaging in a favorite hobby or spending time with friends that share common interests other than competing.

What you do really isn't important, as long as it's something that occupies your mind and prevents you from obsessing over your impending competition.

Over time I improved at relaxing when I needed to rest, and then being able to flip a switch and release my aggressive side when it was time to go to battle. My psychological skill set has since evolved to where I now perform my best when I'm under the most pressure – a stark contrast to how I started out, when I'd fold like a cheap lawn chair whenever there was pressure.

Were you able to see me backstage in the warm-up area during a big meet like the Arnold Classic, you'd have seen me laughing and joking around between attempts as if I had nothing in the world to be concerned about. But when the time to lift grew closer, things would change.

I would begin by focusing intently on the upcoming task, what I needed to do, and why I knew I'd be successful. I would visualize every detail in my mind from start to finish – and when the time came, I'd flip that switch and let the rage loose.

This skill took me many years to master but it's probably one of the biggest factors in my being able to compete successfully on the biggest stages.

To sum up, here are the strategies that I've used successfully:

Victory is Within Your Grasp!

These are the key techniques I've used to reach the mental state that allows me to perform at my absolute physical peak on demand. While controlling your mind may sound daunting or even impossible, it's quite simple once you accept that you can train your mind to become stronger just like you can train your muscles.

And just like building muscular strength, it'll require time and effort but the results are well worth it.

Train for size and a good physique might follow. Train for performance and a jacked physique WILL follow. Here’s the plan.
Athletic Performance, Bodybuilding, Training
Dan Trink August 6 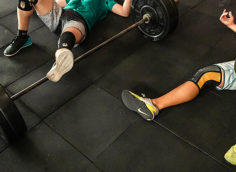 Unless you're a competitive powerlifter, traditional deadlifts are overrated, especially for athletes. Here's why.
Training
Christian Thibaudeau May 22 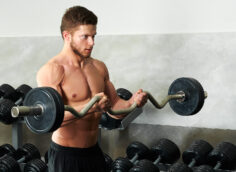 Seven declarations about form that will make you think about exercises in an entirely different way.
Bodybuilding, Training
Charles Staley June 14