There's a ridiculously simple way to build muscle, but most people either don't know it, or they're just too obstinate to embrace anything new. They're like strict government Constitutionalists – if it ain't in the bodybuilding version of the Constitution ("The New Encyclopedia of Modern Bodybuilding," written by founding father, A. Schwarzeneggar), they don't wanna' do it.

That's too bad because they're losing out on their constitutional right to bare big, bad-ass arms, along with big, bad-ass delts, pecs, quads, and the rest.

Maybe Chad Waterbury can present a case for them to adopt this one, simple change.

When your goal is to get bigger, stronger, or leaner, you must respect the nerves in your body.

Of course, none of this muscle fiber recruitment is possible without a direct order from the brain down to your motor neurons. That's why it's essential to understand how your motor neurons, and other important nerves, work in order to supercharge your workouts – no matter what your goal is.

You must recruit your largest muscle fibers to get big and strong. And the only way to accomplish that is by recruiting more motor neurons.

In order to get this discussion going in the right direction, it's important to first understand how the spinal cord and motor neurons are typically depicted in neuroscience textbooks.

The spinal cord is about the diameter of a human finger and it runs from the base of your skull down to your last vertebra. It contains millions of nerve fibers that transmit information to and from the limbs, organs, and brain.

Imagine I pulled out your spinal cord, lopped off the top part, and looked down into the portion where the motor neurons go out to your biceps (flexors) and triceps (extensors). And for the purposes of this discussion we'll say that you could visualize the descending nerve tract from your brain that communicates with your motor neurons. This is what you would see:

Now, let's look at the history of motor neurons. 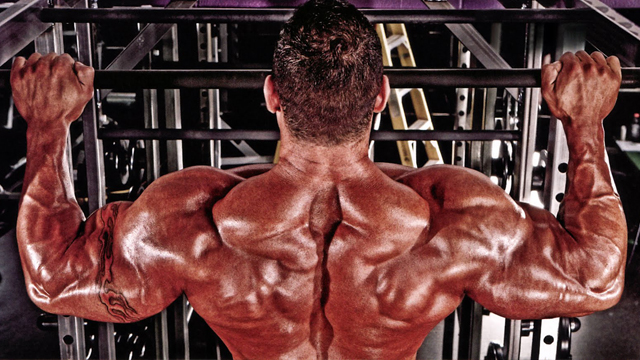 In 1965, Harvard physiology professor, Dr. Elwood Henneman released a landmark study on the function of motor neurons.(1) His team discovered that motor neurons with the smallest diameter required less electrical input to fire than one that's any bigger.

Motor neurons, and virtually every other nerve in your body, are constantly receiving information from other nerves, such as the descending neural tract from your brain.

Think of this constant nerve "talk" as background noise. Once that talk reaches a certain voltage, your motor neuron will fire. I'll use the sciatic nerve, the largest nerve in your body, to explain why this science is important to your training goals.

Imagine you grab a fistful of straws. That "bundle" is your sciatic nerve while the straws are the motor neurons. However, unlike the straws, your motor neurons all have a different diameter and this diameter determines its firing order.

The Difference Between Small and Large Motor Neurons

Next, imagine the doctor inserted the electronic stimulator into your largest motor neuron. This nerve would require significantly more voltage to reach threshold since it's much fatter.

The outstanding text, From Neuron to Brain, sums this process by stating the following:

A life-threatening event will jack up your descending neural drive so high that you'll recruit every possible muscle fiber and this, in turn, will give you superhuman strength until you tear yourself apart.

When I finished graduate school in 2005, a fixed order of motor unit recruitment was considered to be the best explanation of how your muscles produce more force under normal conditions. Any research that showed otherwise was usually performed on a plethora of different animals that often differ from human physiology.

For example, it's been demonstrated that the normal motor unit recruitment process can be altered when a cat rapidly shakes its paw or when an African bushbaby tries to leap out of the lab. But as any good scientist can tell you, what's shown in animals often doesn't carryover to humans. HMB anyone?

Also, there are some odd data on what happens when you maintain an isometric contraction at different joint angles with a super light load. Or how motor unit recruitment might shift in painful, injured muscles.

But what's important to you is how motor unit recruitment is regulated in dynamic contractions with moderate to heavy loads in healthy muscles. In other words, how are motor units recruited when you're pulling a heavy deadlift for four reps? My position, based on the evidence thus far and my unwillingness to argue against decades of research, is that the size principle still best explains how more force is produced in your workouts.

What they observed was surprising. Their data demonstrate that the medial gastroc could preferentially recruit the largest motor units.(5)

This research was startling because it contradicts the theory that human motor units are always recruited in a fixed order with voluntary movements. If the largest motor units were firing, all the smaller motor units should have been working at breakneck speed to keep up.

How was this preferential recruitment of the fast/large motor units possible? Before I get to that, it's important to understand how motor neurons are activated in the first place.

Get Turned On or Off

Let's say you have 100 motor neurons, from smallest to largest, that innervate all the muscle fibers in your biceps brachii muscles. If you slowly curl a 20-pound dumbbell you might activate, say, the first 25 motor neurons that connect to 25 different bundles of muscle fibers.

However, with enough mental focus to accelerate that 20-pound dumbbell as fast as possible, you could recruit, say, 90 of the 100 motor neurons because you greatly enhanced the descending neural drive by attempting to impress that fitness babe with your lightning fast arm curl.

Yep, one simple way to recruit more motor neurons is to focus on applying maximum acceleration to a lift before it even starts. This mental drive will effectively increase the number of motor neurons that are ready to fire so you can produce more force, quicker.

But there are other nerves within your spinal cord (interneurons) that receive input from, and talk to, your motor neurons. One interneuron, the Renshaw cell, can inhibit motor neurons and keep them from firing.

A Renshaw cell receives constant feedback from activated motor neurons. It monitors the level of activity from the motor neurons while receiving continuous input from the brain via the descending neural tract.

So how did the test subjects preferentially recruit the largest motor units? With rapid muscle contractions.

It's important to note two things from this discussion.

First, rapid contractions should be part of your training program. As stated in the Wakeling paper, "These results indicate that one factor that can lead to the preferential recruitment of faster motor units is rapid shortening velocity of the muscle."

That's very cool. Indeed, two ways to immediately recruit more motor units are by focusing on accelerating a lift before it starts, followed by a maximum effort contraction to actually accelerate the load, even if it's heavy.

Second, you should never put too much emphasis on one piece of research. There are limitations with EMG analysis that go beyond this discussion. Put simply, it's very difficult to accurately determine what's happening in your muscles with surface electrodes.

However, I mention the Wakeling study because they used ultrasonography to directly observe the muscle fibers in action with the EMG data.

It's also important to note that they only observed preferential recruitment in the medial gastrocnemius, not the lateral gastrocnemius or soleus. Nevertheless, since the researchers could preferentially recruit the largest motor units in the medial gastroc with rapid contractions, it does explain why the single leg hop while holding a dumbbell has been most effective for adding medial calf mass to my clients.

The goal of training for size and strength should be to recruit your largest motor units. Everyone knows that you must lift heavy to get big and strong, but many people still aren't sold on the potential benefits of explosive contractions. The Wakeling study is just another piece of science to show the power of rapid contractions to tap into your most powerful motor units.

My advice to anyone who wants to get bigger and stronger is simple: lift heavy and focus on accelerating lighter loads as fast as possible. Both methods increase the neural drive to your muscles.

So even if the size principle doesn't work like we thought it did, that advice still rings true. 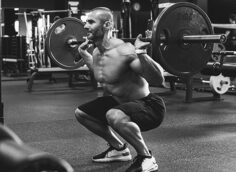 I too have my own version of the seven percent solution, only it has nothing to do with illegal opiates. Instead, it has to do with rep schemes. I call it my Five Percent Solution.
Training
Charles Poliquin July 31

This is a great exercise for triceps thickness, if you do it correctly. Here's how to get it right.
Arms, Bodybuilding, Exercise Coaching, Tips
Lee Boyce September 27