It's been almost 5 years since Coach Poliquin introduced German Volume Training to the modern American bodybuilding audience. Granted, even back in 1996, the method wasn't new – it was just new to Baby Boomer and Gen-X bodybuilders. By Poliquin's own admission, the technique had been used successfully for years in German speaking countries.

And, even in this country, career curmudgeon Vince Gironda practiced a similar method back in the forties and fifties.

For those of you who haven't had the pleasure – or pain – of ever having tried GVT, it involves, rather simply, doing 10 sets of the same exercise, with the goal being to do 10 reps per set. Of course, the goal is more or less theoretical, because if you can actually do ten full sets of ten, you're not using a heavy enough weight.

The time-honored way to determine your starting weight was to choose an amount of resistance that you could do 20 times, and for most mortals, this equates to a weight that's roughly 60% of your 1RM (the maximum amount of weight you can lift one time on any given exercise).

Most trainees are able to do 3 or 4 sets of 10 before the number of reps starts dropping like the Dow Jones after Greenspan raises interest rates. And then, around the 7th, 8th, or 9th set, the trainee invariably experiences some sort of neurological rebound that allows him to suddenly do more reps than he did during the middle sets. Pretty nifty, I must say.

Scientifically speaking, by exposing a group of motor units to such a high volume of work, the body adapts to the incredible amount of stress by growing the targeted fibers at a pretty fast rate. And, along the same lines, the large training volume appears to contribute not only to increased mass, but decreased body fat (Hather, et al, 1992; Stone, O'Bryant, and Garhammer, 1981).

In practice, many trainees were able to put on as much as 10 pounds of muscle mass after doing the program for only a few weeks (provided they increased their protein intake).

Unfortunately, I've found that the original program had a couple of problems. Given my job position as editor-in-chief of a strength-training/bodybuilding mag, I'm able to either work with, or get feedback from, thousands of athletes world wide, many of which've tried the GVT program. As such, I started to see where the program had some shortcomings.

First of all, doing 10 sets of 10 of the same exercise caused people to overuse/overstress certain joint angles. Furthermore, the volume, considering that you were advised to add on a couple of other sets for the same body part using more traditional rep schemes, was just too great for most people, unless they had the advantage of training with a pharmaceutical warehouse in their gym bags.

Thirdly, the program, because of its dependence on doing essentially one exercise per body part wasn't that much of a bodybuilding program. Furthermore, doing one exercise for each body part isn't that great an idea. Say, for instance, your goal is to do 10 sets of leg curls for 10 reps each. Well, the hamstrings don't just flex the lower leg; they also act as hip extensors, and the way you target those muscles is through good mornings and straight-leg deadlifts. Just doing the leg curls completely ignores the other function of the hamstrings.

And lastly, the original German Volume Training program was boring as hell.

So, I experimented. I talked to people like Ian King. I hunkered down in my bodybuilding lab, put together pieces of dead tissue, invoked lightning to strike, and created life out of what was for me and many others, a dead program.

In essence, I kept the purity of the program intact. It still has the theoretical goal of doing 10 sets of 10, but with some major differences.

The program still requires you to use the same weight for all the sets, but instead of doing just one exercise for 10 sets, we're going to be doing 4 different exercises so that we use slightly different joint angles and work the muscle, hopefully, in as many ways as possible.

Here's an example of a chest workout:

What I've done is put the "weakest" position first, and the strongest position third. Then, since pressing movements aren't, by the strictest definition, pure chest movements, I've thrown in another movement that works the chest in a way that duplicates one of the physiological functions of the chest, which is to adduct the arms (the dumbbell flies). True, it's by no means a completely balanced program – affording equal "work" to all muscle groups – but it at least comes close, and it's certainly more balanced than the original program.

You might find yourself only hitting 8 or 9 reps on the 3rd set of the inclines and then "rebounding" and hitting 9 or 10 reps on the first set of the declines, but that's okay. We're after volume here. And, obviously, although you should use the same weight for the first 9 sets, you'll be using dumbbells for the flies and the weight you use will be different.

I devised similar schemes for every major body part:

Note: If you aren't strong enough to do chins, use the pulldown machine.

Again, the latissimus dorsi is a very wide muscle (hell, it means "widest back muscle" in Latin), so it only stands to reason that doing nothing but pull-ups would stimulate only a portion of the muscle. And, since the muscle fiber ratio of the upper lat is different than that of the lower lat, we definitely need to throw in at least one set of barbell rows to work the muscle from a completely different angle.

Squats are an incredible "total body" movement, working the quads, glutes, trunk muscles, etc., but they don't address the primary function of the quadriceps, which is to extend the lower leg. Hence the leg extensions.

Two notes here. First, some trainees might be stronger in the second movement rather than the third, so you'll need to do some experimentation here. Secondly, as far as lateral raises are concerned, I'd prefer that you do them "Jerry Telle" style, but an explanation is beyond the scope of this article.

Although the first three movements work the biceps brachii, they largely neglect the brachialis; hence the reverse curls.

Although we blast the long and medial heads of the triceps pretty well in the first 9 sets, we pretty much ignore the lateral head; hence the Reverse Grip Pushdowns.

The Poliquin version of the original program stressed a certain tempo, and I'd like to preserve those tempos. Trouble is, almost no one I ever see train pays attention to these tempos, which is a pity because it's the difference between a moderately successful program and an incredibly successful program.

I also urge a rest period of between 60 and 90 seconds, and I urge a frequency of no more than one training session per body part every five or six days. Here's a sample split that I've found to work pretty well:

You probably noticed that I didn't include abs or calves. I don't ignore them; it's just that given their special needs as far as muscle fiber ratios are concerned, I work them in a more conventional way than GVT 2000. You can choose to work them any day, but I like throwing them in after working quads.

Here's a brief synopsis of the more important points of the GVT 2000 program:

This is a great program, but much the same as any other program, it'll only work for awhile. In fact, this is probably even truer of this type of high-volume training. I'd recommend that you do GVT 2000 for three or, at the most, four weeks. If you keep on doing high-volume work for much longer than that, you'll reach a point of diminishing returns and your other lifts will start to suffer.

Lastly, and I can't stress this enough, too many people undertake a mass-building program without adjusting their diet one lick. They think that muscle will materialize out of thin air! It's like trying to build a house without any material except sweat!

This is a brutal program that leads to deep-seated soreness, so let's do it right. I've no doubt in my mind that you'll grow.

Rhomboids are a weak link for many lifters. Target them like this. Use a close grip attachment and pull down to the sternum. Flare the elbows out at a 90-degree angle.
Back, Exercise Coaching, Tips
Jesse Irizarry June 15 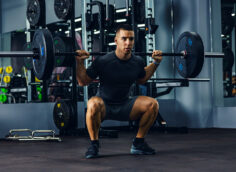 A forward-leaning squat might help you lift more weight, but it also sets you up for small quads and other issues. Here are six solutions.
Bodybuilding, Exercise Coaching, Legs, Squat
Merrick Lincoln, DPT February 10