Don't be that guy. You know who I'm talking about. The guy who walks into the squat cage to do shrugs, or worse yet, the guy who grabs 130-pound dumbbells off the racks and stands in front of the mirror blocking access to the other dumbbells while he shrugs for reps.

There are much better ways to hit your traps, ways that are functionally better and ways that work the entire traps - not just part of them. If you want it to look like you've got the Batman logo on your upper back, then take heed of the following.

Explosive work is important because of its far reaching effects on stimulating your fast-twitch muscle fibers and its subsequent effects on growth, but the effects of explosive work are even more significant when it comes to increasing the size of your traps. That's why we need to emphasize high pulls and cleans when we're blasting the traps.

The upright row has been a classic shoulder and trap developer since the ol' school days. Though I realize that it's plagued with the spectre of injury, the exercise can easily be modified so that it's safer and more user-friendly. Now, anything that makes the unstable ball-and-socket joint of the shoulder bear a big load from a compromised position makes me cringe, so we need to do things to ameliorate the situation. That's where the high pull comes in.

In an upright row, strict form puts a lot of pressure on the shoulder. However, if you turn it into a high pull instead, the contributions from the legs and a strong shrug action on each pull pretty much negate the shoulder problems posed by a conventional upright row. Not only that, but these modifications allow the lifter to ultimately pull more weight in an everyday set. So, clean grip and snatch-grip high pulls should definitely enter the conversation when it comes to trap training.

The mass hatred for CrossFit by many members of the strength training community has unfortunately made some swing too far in the opposite direction and blow the technicalities of Olympic lift variations far out of proportion. Performing high-rep Olympic lifts while fatigued, for time, is something that does nothing but scream for an injury, but that doesn't mean that a conscientious lifter should only do single-rep Olympic lifts on a platform while wearing weightlifting shoes.

Before CrossFit came around, sports athletes were performing hang cleans. The members of my track club and I were included on this list. Mind you, we'd do them for low reps, usually while fully rested, but you see where I'm going with this. As long as you know what you're doing, there's nothing wrong with infusing some power cleans from the hang position to light up the upper traps. I'd recommend keeping things submaximal and under 6 reps.

It's pretty hard to maintain retracted shoulders, upright posture, and a neutral standing position when holding a barbell in front of your body with the hands rotated inward. Going through a shrugging range of motion at the same time can prove difficult, cumbersome, and possibly even inefficient at hitting the traps in their entirety. Getting the opportunity to use a neutral grip should be welcome. Doing shrugs or high pulls while holding a standard trap bar or even the Dead-Squat® Bar can be much more user friendly, safer for damaged shoulders, and incorporate many more trap fibers and other synergistic muscles.

Also, a single-arm dumbbell shrug produces more ROM for the shoulder to elevate and depress due to the unilateral load, and also due to that same neutral grip. Throwing single-arm work into the mix can prove beneficial.

It's important to remember that the traps usually act as synergists to other muscles when these other muscles are the prime movers in a given exercise. That means their role as stabilizers is quite significant. In the same way that adding volume to your chin-ups can bring up the size of your biceps, performing exercises like farmer's walks and fireman's carries can be a great way to make the traps stabilize plenty of load and become exposed to lots of time under tension. Pick up the heaviest dumbbells in the gym and get to steppin'.

Just as there should be a balance between chest and back training to avoid asymmetry and compensations, there should also be a balance between training the upper and lower traps. Most people with poor posture (probably 80% of the human race) involve their upper traps way too much in movements where they really shouldn't be overly involved. You can counter this and beef up the mid back in the process by tapping into the lower traps. Sure, properly executed pull ups, lat pulldowns, and rows can teach a lifter how to make those muscles fire, but that's not quite the same as training them specifically as prime movers for the purpose of body development. For instance, the single arm trap-3 raise does a nice job in targeting the lower traps.

However, it's time to take things up one sophisticated notch with the kettlebell angled press. There's a lot going on here that the typical unilateral trap-3 raise doesn't attack. First of all, the movement still takes advantage of the proper force angle, but it encourages an isometric contraction of the shoulder retractors and postural muscles because the bell is being held in close to the body. In other words, you're not allowing gravity to pull the bell down towards the floor. In addition, the lever arm created by the arms sliding forward and outward creates plenty of work for the thoracic spine extensors while making sure the deltoids are less involved.

Third, the fact that you're using a kettlebell instead of a dumbbell is a big deal. The weight distribution of the bell makes the weight feel that much more daunting at the top of the force curve. It's a subtle change but it makes a big difference. Think about holding a 10-pound dumbbell out front of you, and compare that with the thought of holding that same 10-pound dumbbell on a string so it hangs to waist level while your hands are still outstretched at the same level and place. Needless to say, it won't take much weight to make the muscles work hard.

I add direct trap work to my back workout instead of working them on shoulders day.

* You know the drill. Heavy, and as far as possible.

Simply put, don't forget to continue back squatting, deadlifting, and overhead pressing. Spinal loading exercises (especially the back squat) will allow the traps to deal with the heavy loads placed directly upon them. The SAID Principle refers to a specific adaptation to imposed demands. There aren't too many exercises that allow you to rep out with hundreds of pounds, but the back squat is one of them. The bar being placed directly on the back will result in the body adapting over time (by growing bigger and stronger to facilitate the heavy bar) or continuously getting its ass kicked every time squat day comes around. I can't think of too many heavy back squatters who still have fledgling shoulders. The moral of the story: Squat. Heavy, and often.

Keep in mind, the workout above is a trap-emphasis back workout. On a typical back day, I'd apply much more back emphasis via deadlifts, bentover rows, seated rows, or other standard lifts. With that said, this program may suit you well as a second back workout for the week. Regardless, you'll be ready to blow up by the time you hit the dumbbell snatches. This program provides the perfect balance of HTMU [high threshold motor uints] stimulation and TUT training to get the best of both worlds and hit the traps from top to bottom.

It's impossible to cheat on this back exercise, and it builds muscle like crazy. Check it out.
Tips, Training
Christian Thibaudeau May 22

There's no universally recognized name for this exercise, but we think it should be called “That movement that makes my quads bark like a dog.”
Legs, Powerlifting & Strength, Training
Ben Bruno November 12 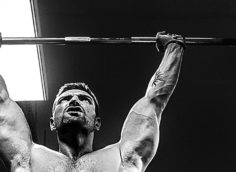 Some commercial gyms are going out of business. But that doesn't have to affect your gains. Here's why.
Training
Christian Thibaudeau October 15 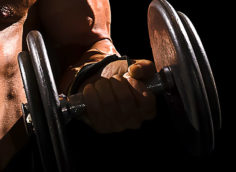 Adding a band to your biceps curls has a lot of benefits, but don't screw it up. Check this out.
Training
Nick Tumminello November 24