Anteriorly loaded squat variations require significant core, quad, and upper back strength. We're mainly talking about the front squat and a relative newcomer, the goblet squat. Which is best for you? Let's match them up, grade them, and see which variation reigns supreme.

To perform a goblet squat, you need only a chunk of weight – kettlebells, dumbbells, or medicine balls are the three most common choices. Dan John's summary of the movement is still the gold standard. He says that one simply needs to stay tall and sit the torso down between the legs. Because of the anterior loading, this is easy for almost everyone. To perform flawless goblet squats, you just need to be reminded to:

That's it. Easy movements are great movements, and this variation is accessible to almost everyone.

Benefits of the Goblet Squat

Shortcomings of the Goblet Squat

My gym has 16 pairs of dumbbells of 100 pounds or more, with our heaviest set being 175 pounds. Few gyms, though, have dumbbells or kettlebells heavier than 100 pounds, which makes long-term progressive overload difficult or impossible. Plus, it's a hell of a task to get a 175-pound dumbbell into goblet squat position. Many can't lift them off the ground, much less get them up to chest height. I saw stars for this entire set with the 175.

And, though the goblet squat is great for beginners, I've found that it consistently causes more back pain that any other variation we teach, at much lower weights, even with good form. Because the object is held much farther in front of the center of mass, the weight pulls the body forward hard – it exploits a weak back. Note the photo where the green line represents the center of bar weight and the blue line my projection of the center of mass. 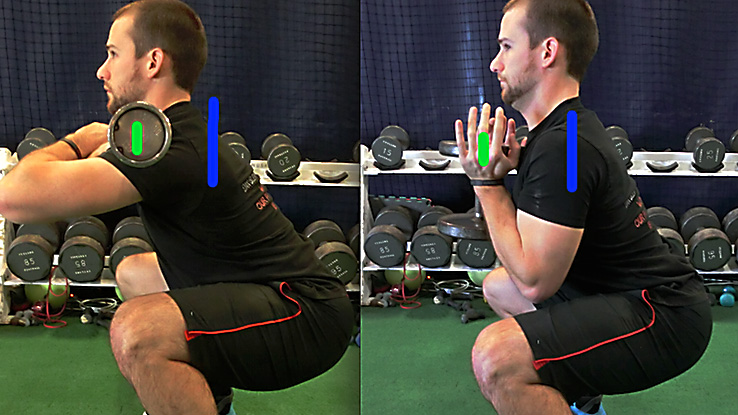 Lastly, anyone with a large client base sees a wide continuum of balance and coordination. Those with poor coordination are better candidates for the goblet squat, in which the weight is more easily stabilized; barbells are long and unstable. But, as I watch athletes sit deep into a goblet squat, I worry about what happens if they lose their balance backward. How would one ditch the weight, held across the most important organ in the body?

I don't have a good answer, and the impact of a 100-pound dumbbell hitting the heart might kill a person on the spot. The exercise is difficult to spot and we usually have suspect athletes squat with their back close to a wall or squat rack, which can serve as a backstop should they want to fall backward.

Best Use of the Goblet Squat

Considering its strengths and weaknesses, the goblet squat has a niche:

Barbells are impractical outdoors and in workouts where a person is challenged to move fast between exercises. The goblet squat solves those problems. Besides the obvious use of teaching technique to beginners, the goblet squat is great for major squat movements where weight isn't the focus. As a warm up, the goblet squat is a fantastic grab-and-go that prepares you for a heavier workout ahead, especially one featuring its nemesis, the front squat.

The front squat will humble those that neglect it as it requires significant coordination, core strength, back rigidity, and overall leg strength. A more quad-dominant squat variation, the front squat typically allows for the best depth, south of even the goblet squat. It's also the easiest squat to keep a tight, neutral, or arched lower back, even with heavy resistance. There are three different grips to choose from, which makes the exercise accessible to anyone:

Christian Thibaudeau's video explains the different grips perfectly for those who need a brush-up.

The front squat is also very simple to learn and execute. Once the appropriate grip is chosen, the exercise boils down to the following:

Many coaches will advise the lifter to squeeze the shoulder blades together to resist forward collapse. Though this makes sense, and back tightness is huge, I haven't found this to work very well. The shoulder blades are so far protracted in each grip variation that getting much, if any, retraction is difficult. This isn't to say that you shouldn't try, but at heavy loads there isn't much "feel" to the retraction and tightness attempts. Hence, I didn't list it as a cue. Check out the photo below showing the scaps in similar levels of protraction in each variation (from left to right: cross-arm, strap-assisted, Olympic). 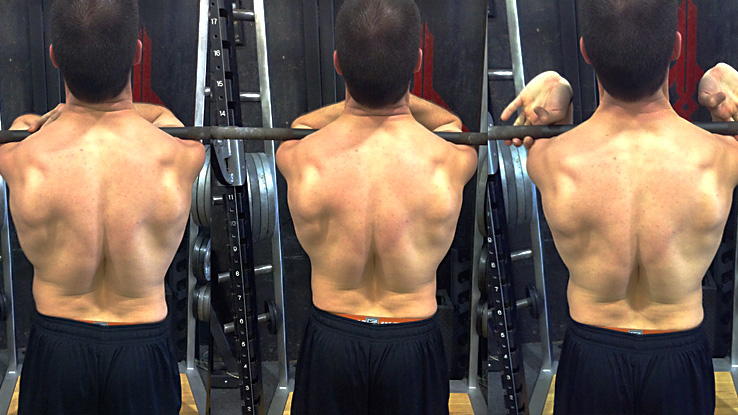 Benefits of the Front Squat

Because the anterior loading of the bar is closer to the center of mass, I get few complaints of back pain. Anterior loading keeps the lower back tight by default, because by the time the torso would lean enough to produce lumbar flexion, the bar would have been dumped. For these reasons, it's both a great entry-level variation to teach proper spine mechanics and a life-long strength builder.

Shortcomings of the Front Squat

The front squat requires a lot more athleticism than other variations because of the heavy anterior load and the small, unstable placement of the bar. It's not easy balancing a heavy seven-foot bar that rests only in a small notch on the shoulders. The front squat exploits deficits in core strength, ankle mobility, hip mobility and upper back strength. Weak links are very difficult to overcome.

Front squat bar placement doesn't work well for everyone. Those with underdeveloped deltoids or shoulder issues can experience pain in keeping their elbows up. And, because it's easy to squat deep with a front squat, ankle mobility can quickly become a limiting factor. Lastly, because the bar is only loosely secured in the cross-arm and strap-assisted grips, bars thicker than 29mm tend to slip more often and dump at lower weights.

Best Use of the Front Squat

It's hard to pinpoint a "best use" for this lift, mostly because it's utilitarian. The front squat can be used to teach a beginner or harden a veteran. It exploits and yet develops ankle mobility, hip mobility, core strength, balance, upper back, and quad strength. Although this list seems all-inclusive, not all squat variations can boast the ability to increase proficiency in so many attributes. For those who want to get better at the Olympic-style, very-deep squat, the front squat is the best place to start. And for those who want to keep their O-lift totals rising, well, it's a staple.

Both are great training tools, used for different jobs. But, in long-term and overall utility, the winner is the front squat. Although the goblet squat is great for teaching the movement and can be a useful tool for hypertrophy, its usefulness can run out fairly fast.

One last word regarding hypertrophy, though. While I gave the front squat an A and the goblet squat a B in this category, I need to make a distinction. I'm a huge believer in 6-8 reps for hypertrophy, and the front squat works well for this rep range. But, for those who want a good pump or who grow better in the 10-15 rep range, the front squat isn't a great choice. The upper back simply fatigues too fast in long sets, and the last few reps always end up looking ugly.

Additionally, going slow and maximizing time under tension with a front squat means you have to drastically lighten the load, and the problem of upper back fatigue is even further exacerbated. For a traditional hypertrophy rep range of 8-15, drop sets or challenges like 1 1/2 reps, the goblet squat is a much better choice. Though overload isn't as great, the quads get hit really hard, time under tension can safely increase, and all of these factors result in an intense pump. It all depends on the rep range you're working in.

Combining two of the silliest things in the gym – the Smith machine and the BOSU ball – actually makes for a fantastic ab exercise. Try it.
Abs, Exercise Coaching, Tips
TC Luoma January 27 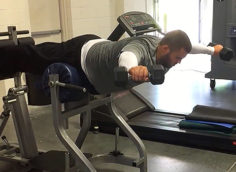 This is a true multi-functional exercise. It not only works the rear delts, but it nails the entire posterior chain from head to toe.
Exercise Coaching, Glutes, Shoulders, Tips
Joel Seedman, PhD July 17