We've spent the holidays (in between eggnogs) examining the nature of the Internet. In other words, we're trying our damnedest to figure out how to best suit the average Net surfer.

What's become increasingly evident is that the Internet isn't going to take the place of good ol' books and magazines. You can't take it to the head (unless you've got one of those nifty e-books that use wireless interfacing), and you can't very well read it on the exercise bike. Nor can you roll it up to swat pesky gnats.

What's more, many of us have computer screens that make reading an article as easy as reading a piece of newspaper print through a hunk of cheese.

As such, long articles don't often cut it. Don't get us wrong, we're not going to cut any of the meat out of our more lengthy articles. Rather, we're going to try to include the occasional short topic that takes only a few minutes to read and that hopefully, gives you some info that you can begin using immediately, without cutting out a coupon, licking a stamp, and waiting for 5 to 6 weeks for it to arrive.

Hence, "Short Topics." This short column might give you a neat little training tip, or it may address diet, supplementation, drugs, or even cooking. If it's interesting, and it's relatively short, it may find its way here.

This first one details a hybrid form of leg curl that many of us here at T-mag have been using to great success, if cussing and cursing is an indication of success, that is.

It's aliiivvvveeee!
– Colin Clive, from Frankenstein

While the prone hamstring curl probably isn't the best hamstring exercise, it's probably the most common. As such, it seems all the more important that trainees do it correctly, and, while they're at it, maximize its effects.

Hence this hybrid leg curl. Like Frankenstein creating his monster, we've combined several tips from different strength coaches and made one mother of a leg-curl exercise.

Okay, this one requires a bit of coordination, so those of you who have trouble patting your head and scratching your belly while whistling Dixie might want to sit this one out.

Assume the usual position on the prone leg-curl machine, but instead of doing both legs at once, we'd like you to train one leg at a time, starting with the weakest one. In Australian strength coach Ian King's words, if you don't know which is weakest, my little marsupial, you soon will.

These one-legged leg curls are also to be done using the 1-1/3 technique. (Hamstrings respond especially well to eccentric work, so we might as well take advantage of that fact.)

As you raise the lower half of your leg, you'll touch the heel to your butt over the course of 2 seconds, pause for 1 second, lower the heel 1/3 of the way down, and again pause for another second. Then, you'll return the heel to the butt taking another second, and then lower the weight all the way down to the starting position over the course of 3 seconds.

That's one rep, but not so fast, bubba. There's one more trick to learn.

When you curl the lower leg up again, point the toes "upward" again, and when you lower the weight all the weigh down, point your toes away again.

Although you might hedge at training the hamstrings one at a time (it feels "weird" until you get used to it), the vast majority of people have disparities in the strength of their hamstrings. As such, when you work both together, the stronger one bears the brunt of the work and the weaker one never catches up.

You might also remember to keep the number of reps you do during hamstring exercises low. Given its muscle fiber make-up, and very generally speaking, doing more than 8 reps, or doing sets that last longer than 40 seconds, is a waste of time. Oh yeah, you'll build muscle endurance all right if you do more reps, but you'll look like one of those pieces of sinew that come stumbling over the line at the Olympic marathon and then pukes on the cameraman's shoes.

Oh, one last thing: remember that the hamstrings have a dual function. They both flex the knee (which is worked by doing the aforementioned leg curls) and extend the hips. That's why a complete hamstring workout will always include exercises like semi-stiff legged deadlifts or good mornings.

Enjoy, only don't get too freaked the day after you do this movement, because you'll be walking like Frankenstein's monster. 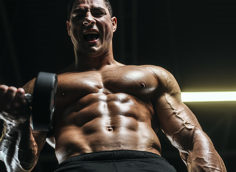 Here's how to use iso-holds to stimulate new growth in your hamstrings, glutes, biceps, and more.
Training
Paul Carter February 18

Stop listening to uneducated jackasses when it comes to squat depth. You can figure out what's best for your anatomy with these tests. Here's how.
It Hurts Fix It, Mobility, Squat, Training
Dr John Rusin July 20