I think it's a safe bet that at least 50% of bodybuilders are making one little mistake that, in effect, is making most or all of their workouts a waste of time. In the words of Vincent in Pulp Fiction, "That's a bold statement," but I think we can back it up. It all has to do with something called the stretch shortening cycle, and if you're taking advantage of this little phenomenon, then you're really putting a crimp in your efforts to build muscle.

Ever notice that some guys, when they work out, piston the weights up and down as if they were human jackhammers? Hell, even baboons, who mount their mates, copulate, and ejaculate in 1.8 seconds don't make pelvic thrusts nearly as quickly as most of us do reps of bench presses.

However, if you've ever looked at one of Charles Poliquin's workouts, Ian King's, or even mine, you've no doubt seen a little column over to the right that reads tempo. It usually looks something like 3111, and it has nothing to do with what number you have to dial if you want to save 10% on your long distance bill.

The father of this numbering system, or at least the uncle, is Australian super coach Ian King. I call him the uncle of this practice because Ian doesn't take full credit for the numbering system. Instead, he lists Arthur Jones and Ellington Darden as the first to attach numbers to training programs.

However, Ian was the first to recognize the role of tempo, or speed of movement, in what's known as the stretch shortening cycle.

For years, I've adjusted my tempo on most of my movements more often than I adjust those damn oversized underwear that I got off the sales rack at Sears. I've always used it as just another one of the several variables that I continually rotate to keep my nervous system off balance, but I never really thought about the primary role of speed of movement. According to Ian, the role of tempo in lifting and lowering weights is simply to negate or exploit the effects of the stretch shortening cycle.

Now, unless you're some sort of physiology student, strength coach, or all-round smarty-pants, you probably don't know what the stretch shortening cycle is. Okay, the old, outdated term for this phenomenon is plyometrics, and maybe you know what that word means, or maybe you don't. If you fully understand it, bear with me for a minute. If you don't, then please read the next couple of paragraphs carefully.

As an example, walking employs the stretch shortening cycle. When your foot hits the ground, the quads go through an eccentric (shortening) cycle, an isometric cycle, and then a concentric (lengthening) cycle. If the transition from eccentric to isometric to concentric is performed quickly, the resultant concentric contraction is a lot more powerful than if no eccentric action was performed.

Confused? That's okay. I confused the hell out of myself. Try this one. Stand up. Now bend at the knees and hips as if you were going to jump, only, don't jump. Hold that bent-knee and bent-hip position for 3 to 5 seconds. Now jump. Not too impressive, right? Your local NBA team isn't missing anything. However, if you stand up, and then bend your knees and hips very quickly and without pausing, spring upwards, you no doubt got at least close to knocking that can of corn off the top shelf. What you experienced was increased athletic ability as a result of the stretch shortening cycle.

The phenomenon isn't completely understood, but at least part (20 to 30%) of the added athletic ability has to with elastic energy (Bosco, 1987).

The problem with elastic energy

Look at it this way, if you're doing a squat, and you "collapse" into the lowering phase as quickly as if you had taken a whiff of a sweat sock that had been lodged up Gunter Schlierkamp's ass for a month, and then, without pausing, spring upwards like a jack-in-the-box, you're taking advantage of the stretch shortening cycle and you're not really applying enough stress on the muscle fibers to elicit growth.

The key is negating the stretch shortening cycle phenomenon.

Biomechanist Greg Wilson found out something amazing a few years ago. He learned that if you do a conventional bench press with an eccentric or lowering phase that was about a second, it took a full four second pause in between the eccentric and concentric to completely eliminate the stretch shortening cycle. Got that? If you lower the bar and you don't rest it on top of your chest for a least four seconds, you're still getting an added boost from all the elastic energy. The only real work you'll do is during the last third of the concentric movement!

If, however, you negated all that elastic energy by taking a four-second pause, you had to work all that much harder — recruit that many more muscle fibers — to lift the bar. And, harder work equals more muscle growth.

Of course, there's another way to negate this elastic energy. You can lengthen the lowering phase of the lift. For instance, if it takes you two seconds to lower the bar, you might only need to pause two seconds before you lift the bar. Likewise, if it takes you three or more seconds to lower the bar, you only need to pause one second before raising the weight. Got it? I call it the four-second rule. Any combination of numbers that equals four seconds or more in the lowering phase and the pause will negate or partially negate the stretch shortening cycle phenomenon.

Note: Employing the pause is also a way to ensure safety. By pausing, you decelerate and save chest plates and knee bones. It's also good for developing technique and forcing a trainee to use control during every angle of the movement.

Why don't more people do it this way? Because, it's more biologically efficient — easier — when you take advantage of the stretch shortening cycle.

Now you know the purpose of the first two numbers under "speed of movement" in all Ian King's exercise prescriptions.

We've discussed the eccentric component of the lift and the pause. Now it's time to talk about the actual lifting of the weight.

Now, years later, it seems that bodybuilders, too, should have been using explosive concentric movements, too. If you intentionally accelerate a weight, you'll develop more functional power, but you'll also recruit more muscle fibers, leading to greater hypertrophy.

True, you'll get higher muscle tension when you go slowly, but fewer motor units are required. It's somewhat of a tradeoff, but by no means is it an equal tradeoff. That's why 90% of the workouts Ian King writes require an explosive concentric.

When it comes to fast firing concentric movements, there have traditionally been two schools of thought. Finnish researcher Hakkinen suggested using lighter weights which would enable the trainee to do the concentric rep very quickly, while German researcher Schmidtbleicher recommended using heavy weights and simply trying to move them quickly.

In other words, according to the Schnitzel-eating researcher, simply trying to lift a weight fast — regardless of how long it took you — was as good as actually moving it quickly. The weight you're using might be so friggin' heavy that it takes you four seconds to lift it, but as long as that four seconds is as fast as you can push it, you're gaining the optimum training effect.

Points to remember while using speed of motion

• Use the four-second rule: the number of seconds it takes for the lowering of the weight and the pause should equal at least four.

• Most of the time, bodybuilders should attempt to lift the weight as quickly as possible to recruit more motor units and generate the most force, and simply trying to lift the weight quickly is as good as actually lifting it quickly.

• Generally, the pause at the end of a rep (the middle number in Ian's prescriptions; and the fourth number in Charles' protocol) should be equal to the pause taken between the eccentric and the concentric.

Okay, so maybe we took a long time to make a simple point, but I hope it sticks with you. Getting rid of the stretch shortening cycle will do more to recruit additional muscle fibers and maximize the effectiveness of your workout than practically anything else you can do. Now leave all that elastic energy where it belongs — in your shorts. 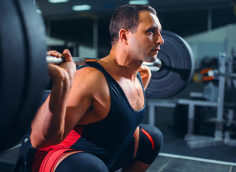 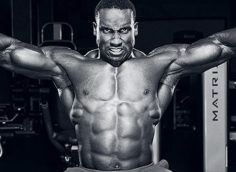 Tweak your lateral raises like this and you'll build width on your shoulders and keep them healthy.
Shoulders, Tips, Training
Dre Delos Santos July 21

You may be hurt, but it doesn't mean you can't train. Tony Gentilcore tells you how to work out, scream a lot, and still get a training effect while you're injured.
It Hurts Fix It, Training
Tony Gentilcore April 24