Going to failure is the most effective way to build muscle. But only when used the right way (low volume training) and on the right exercises (isolation and low stress lifts). So what's the best method for going to failure? Rest-pause training. No other training method will lead to faster hypertrophy.

Contractile failure is the main trigger to stimulate growth. The key in rest-pause is not the accumulation of fatigue, but rather hitting failure at several points in the same set.

Reach the maximum number of FULL reps you can do. You can't fake yourself out – you must be certain that you wouldn't be able to complete one more full repetition. But don't try another one and fail during that rep. While it is effective to stimulate hypertrophy, it comes at such a high CNS cost that it would mean that you could only do 1-3 sets in your whole workout and hope to recover.

By going to the point where you know you wouldn't be able to complete one more rep you'll have the stimulus necessary to stimulate growth without the CNS burden.

Perform the reps so that the target muscle stays under maximal tension the whole time. This means avoiding acceleration during each rep.

The best way to describe how you perform the reps is "smooth" or constant speed. The lifting portion should take you about two seconds. Focus on flexing the muscle as hard as possible at every single point in the range of motion. The eccentric (lowering portion) should be done either under control (about 2 seconds) or slowly (about 5 seconds) depending on the method.

If you do reps using too much acceleration on the way up you'll lose a lot of the stimulus from the set. Yes, you'll use less weight with smooth and constant-speed reps. But the load used doesn't matter as much when it comes to stimulating muscle growth, as long as you hit failure.

Tempo contrast refers to changing the speed of movement during the set. In a rest-pause set with two pauses (three mini-sets) you use a slower, more controlled tempo at first and increase the speed a bit more on every mini-set.

This approach works for two reasons. First, the slower eccentrics in the first portion of the rest-pause set activates mTOR to a greater extent, which turns on protein synthesis more. The slower eccentric being performed while maximally tensing the target muscle also increases the quality of the subsequent contraction, making the reps more effective at stimulating more fibers. Because the slow eccentrics are harder to execute, you'll have to use less weight than during a normal rest-pause set.

Second, each portion of the rest-pause set is done with gradually easier reps. This allows you to do a greater total workload during your rest-pause set versus a normal rest-pause set. This higher mechanical work coupled with hitting failure three times in a set will provide for a very strong stimulus to increase protein synthesis.

In each set do two rest-pauses, which means three mini-sets. The pauses are 10-15 seconds long. Use a weight that you'd use for roughly 12 normal reps.

In the first mini-set do slower reps, especially on the eccentric (lowering) phase. Lower the weight for 4-5 seconds. In the concentric (lifting portion) the actual speed isn't as important. What's important is that you try to have as little acceleration as possible. Once the weight starts moving, lift it at the same controlled speed throughout the whole range of motion, flexing the target muscle as hard as you can.

If you're doing it right you should get 6 to 8 reps. If you can do 10-12 reps you either selected the wrong weight or didn't do a good job at making the muscles work hard on each rep.

Go to the point of muscle failure – until you reach a point where you know that the next rep would not be possible. Go to the point where that last rep is extremely hard, but don't resort to cheating or changing position to be able to get more reps. The goal is failure to contract the target muscle hard enough. You defeat that purpose if you switch the stress to other muscles during the set.

When you hit failure, rest for 10-15 seconds. Keep the same weight and then do the second mini-set. Now change the rep style to "normal" reps. This means that you can accelerate the weight a bit on the way up. Still control the weight and focus on tensing the muscle. This is how you'd do your normal isolation reps. You might hit an additional 5-8 reps but in reality that doesn't matter as long as you hit failure.

When you hit failure, take another 10-15 seconds and move on to the third mini-set. Now switch to a looser rep style. Don't use horrible form! Just use enough momentum to help you get the weight to start moving. Ideally you should get another 3-5 reps. Doing more than 5 most likely indicates that you either went easy on the first two mini-sets or used too much momentum on the third one. Remember that the goal is not more reps; it's to fatigue the muscle fibers more.

The work set doesn't have a predetermined number of mini-sets. You go until you can't complete one quality rep. Start with a weight you can do for 6 to 8 reps. The number you get isn't important, this is just to help you pick the load.

Continue doing the same process until you can only perform a single complete rep in a mini-set, where you know that getting a second one would be impossible.

The goal of this type of rest-pause set is to reach contractile failure on all three types of muscle action: concentric, isometric, and eccentric. This approach is arguably the strongest hypertrophy stimulation you can have. The only downside is that you need a training partner.

Each set is made up of three mini-sets. The pauses are 10-15 seconds long. Start with a weight you can do for 8-10 quality reps and go to contractile muscle failure. Rest 10-15 seconds.

Using the same weight, lift the weight until you reach the maximum tension position (hardest position or angle of the movement). In most exercises this is the mid-range point. Hold that position while flexing the target muscle as hard as you can until you can't hold it anymore, reaching isometric failure. Rest another 10-15 seconds.

Still using the same weight, have a partner assist you in doing the lifting portion of the movement and do the lowering portion by yourself in 4-5 seconds. Do reps like this until you can't control the weight during the lowering phase.

This technique works best with isolation exercises as well as pressing movements. (Not pulling exercises though.) You'll go to failure, then the second and third mini-sets use only partial reps done to failure.

Each set is made up of three mini-sets. The pauses between mini-sets are 10 seconds long. Start with a weight you can do for 8-10 reps. Do full-range reps until you hit contractile failure.

When you hit failure, rest for 10 seconds. Resume the set but this time only perform half reps in the top portion of the lifting phase – going from mid-range up to peak contraction. Perform partials until failure. Rest another 10 seconds.

Initiate the last mini-set by doing partial reps in the bottom half of the movement going from starting position to mid-range, then go to failure in that range.

This approach, which has been successfully used by many bodybuilders, is probably the most demanding of the rest-pause variations. It combines rest-pauses and drop sets. You lower the weight when you hit failure to continue on with the set.

Think of each set as having two rest-pause episodes. The second episode being lighter than the first bout of rest-pauses. This type of rest-pause allows you to place far more demands on each muscle fiber, leading to more growth stimulation. As you might imagine, it's also very demanding and nobody should need more than two such sets per exercise. In many cases, one will be enough.

Each set is made up of four mini-sets: two rest-pause episodes of two mini-sets each. The pauses between all the mini-sets – including the drop – are 10 seconds long.

Rest another 10 seconds while you decrease the weight by roughly 20% and continue the set, reaching failure with the new lower weight. Rest for a final 10 seconds and perform one last mini-set, going to failure.

I do heavy, non-failure work on the big basic lifts and combine it with failure work like this on isolation exercises. For hypertrophy I only use rest-pause methods now. I see no methods that are more effective. The only reason some people won't get the results they want from rest-pause is if they do too many sets per exercise.

It's a very powerful method, and proper workout nutrition is a must. When you go to true contractile failure (several times in a set) one such set will be enough for most, though slow twitch individuals will need more. So people will need two per exercise. I've yet to see people needing three such sets per exercise to get maximum growth. It's better to move on to another exercise than to continue blasting on an exercise when you've gotten all the growth stimulation from it that it can possibly offer.

Give rest-pause training an honest try. If you're tough enough to handle multiple failure points per set you'll be rewarded with maximum growth. 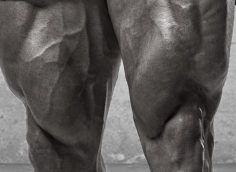 Here's a fast and effective way to get on the path to success.
Powerlifting & Strength, Training
Matt Kroc October 31

If you're searching for a way to smash a strength plateau in a hurry, try deadstop training. Here’s how to do it.
Powerlifting & Strength, Training
Lee Boyce April 8