"We didn't do enough foam rolling!"

I can guarantee that no losing coach from the Super Bowl, Heineken Cup, or the Olympics will ever utter that phrase as a reason for not winning.

It started to concern me years ago, when I first began to add foam rolling and correctives to my training sessions. I noticed something very troubling – my athletes in the weightroom were conducting themselves with the intensity of middle-aged women waiting for the next hot yoga class.

Foam rolling isn't the same edge as bodyweight snatches or double bodyweight squats. Seriously, it just isn't as intense, but do I really have to tell you that?

It's a fine line we walk in strength coaching. Yes, we need to expand our tissue work, our correctives, and our quality of movement, but let's be honest here – we've forgotten that we also have to lift some damn weights!

Friends, we have to be able to do both: take care of business on the restorative and corrective side, and on the other side, try to move enough iron so that the bar bends a bit.

Probably the biggest change in my career in the past few years is the number of workshops that I attend. In the past, I'd catch a clinic about once a year, and perhaps once every few years I'd find myself at a workshop running around, doing drills, and making a fool of myself.

Since I'm invited to a lot of workshops now, I try to get there early and listen in. Now, as Laree Draper (publisher at On Target Publications and wife of the great bodybuilder, Dave Draper) will attest, I like to sit in the front row. Part of the reason is that I want to be the first, the first to hear it, the first to see it, the first to try it.

It was only recently that I discovered that I had a skill, which I'm about to share, that allows me to take in all these new ideas or new equipment and keep the training programs fairly seamless.

I've mentioned the concept before from David Denby's outstanding book, "Great Books," but I think it deserves a deeper study. It's called Think Double.

As we wade through what seems like a new fad or catchall term each year – with core, functional, thoracic mobility (and all the other adjectives put in front of "mobility"), foam rolling, and the use of the word "elite" being the big sinners – it becomes increasingly apparent that while the original idea might've been sound, the hucksters and hawkers have left us wondering if we're going to die if we don't rub out our soft tissues.

This is thinking double. There's a lot of sound thinking behind correctives, for example, but no one needs to spend the bulk of their training correcting things that are fine.

It's like the skinny guy in the gym who always does cardio but wants to get bigger – try lifting heavy weights. There's an obviousness about thinking double that many dismiss as, well, obvious. 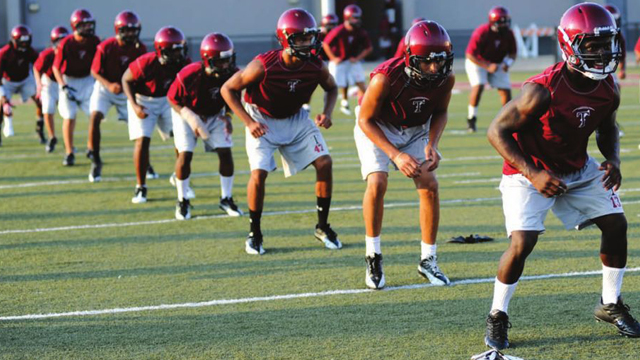 The thing I like best about foam rolling is that the athlete has to get on the ground to do it. If I were to underline the biggest gap in most people's training (besides lack of a quality squat and any kind of loaded carries), it would be the total lack of groundwork.

Foam rolling gets people on the ground and that's a good start for many. If you want to try an interesting experiment, get a heart rate monitor and for five minutes, get down on the ground (vary the position, front or back or sides) and stand up. Repeat. Yes, that's it.

Oh, you shouldn't do this in public gyms as you'll look like you're crazy. We used to do this in high school football and it was called "grass drills." They're also known as "up-downs" and, frankly, this one thing sucked more than every other awful thing associated with playing the game. However, for my middle-aged clients, this simple drill, done unloaded, might actually be a lifesaver.

Listen, if you bring peanut butter to a daycare facility, someone will call the SWAT team in to take you down. It's nearly criminal to pop open a can of peanut butter on a plane. I'm not sure of the stats on the deaths by peanut butter, but I know this: 28,000 Americans in the plus-50 age range die yearly in fall-related injuries. That's stunning.

Lightning kills just over 100 and every track and field coach has a full protocol when a bolt is seen. But outside of a few mats and rails, what have you done to train yourself (or your folks or clients) to prepare for something that's about 280 times more likely to happen to you?

So, my groundwork "thinks double." It has a cardio component by simply having you pop up and down, it has a tissue aspect (more in a moment), and it has a prophylactic quality in terms of not getting injured from falling (within reason).

First, I enjoy foam rolling with the best of them. I don't believe the hype about a lot of it as I've read and listened to long waxing stories of emptying the lymph nodes and extending the "this" or the "that."

I enjoy my Yoga class and I've added a move called "rolling my eyes" when the instructor tells us that this position realigns the ascending colon.

But I do think it makes one feel better, and it might lend itself to better training. However, I will say this: if my child was roped down to train tracks and the engine was coming around the mountain, I wouldn't foam roll first before I sprinted over to save her.

Second, moving on the ground builds that quality that I call "armor building." I've had long talks with strength coach of the Cincinnati Bengals and good friend, Chip Morton, and about how we as strength coaches can "toughen up" the athletes with certain moves.

I literally stumbled across this when one of my running backs noted that doing kettlebell cleans was a lot like the pounding he took running the ball. I thought about how some things, like those damn grass drills, really do mimic what game conditions feel like.

Perhaps grass drills realign the ascending colon. Regardless, groundwork seems to toughen one up a bit. I've noticed, for example, that when I have to crawl around in my subbasement, just under four feet of height and a huge space, I'm sore in the oddest places the next day. Groundwork preps you for the ups and downs of life. Literally. 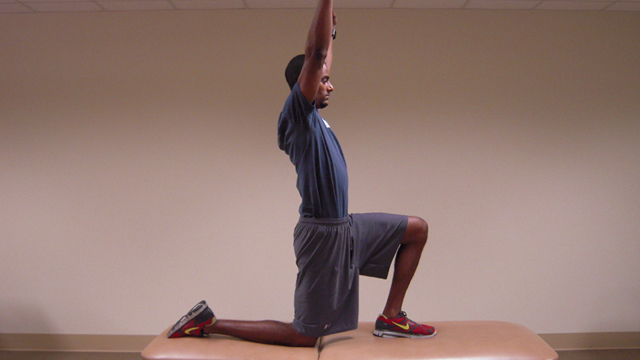 Thanks to Brett Jones and Grey Cook, half-kneeling movements are now used in many facilities. If you don't know what they are, it's simply training on one knee. I'd recommend that you strive for a 90-degree angle between your upper and lower legs, so make yourself long when you do these. With my athletes and trainees, we use the half kneeling position every workout.

The pelvis is a bowl and the rib cage is like a box. I use a simple example at least weekly where I put a small box on a bowl that I have in the gym. If everything is flush and square, the two objects could sit still for millennia. If you tilt the bowl, the box has to adjust. When you half-kneel, the bowl (the pelvis) must be square. To train that we do several things:

First, the big toe of the down foot (if your left knee is on the ground, it would be your right big toes) needs to push into the ground. Focus and feel that the whole time.

Second, actively strive to stretch the front of the left hip (in this example, we have the left knee down). For nearly everyone, the big toe and the stretch the hips cues are enough.

We do basically two exercises daily – press and paddle. With a kettlebell, begin pressing in this half-kneeling position. Use both hands and strive to feel the big toe and the stretch throughout. You shouldn't squirm around too much.

For many, this is the single best way to stretch the front of the hip. If you suddenly become unstable, you lost the box and bowl. Realign and begin again.

The paddle is the same as Cook's various "Chop and Lifts," but we simplified it for our purposes. I use the TRX Rip Trainer, but any pulley device will work. A trusted training partner with a rope or towel can work well, too.

With the same left knee down, pull the resistance from high and right, to low and left. This lights up the hip in a way that makes stretching exercises seem like a waste of time (as they often can be)!

Again, this is thinking double. I know that we need to stretch the hip flexors, maintain a solid core, and press. Janda's research into tonic and phasic muscles forced me to rethink how I work in stretching the hip flexors, for example, and developing the deltoids and triceps. Well, here you go. With half-kneeling work you do both.

But strength training can be, and absolutely is, corrective. I had a Saturday training session for the greater part of my career based on these moves:

With my competition schedule, I normally competed on Saturday (Highland Games and track meets). So, I'd come home from a long day and do these lifts. I continue to believe that this group of five movements provided me with not only a tonic, refreshing workout (nothing ballistic, nothing that took a lot of thought), but I was stretched out by the moves.

I also feel that these movements tended to "put everything back into place." This is a scientific concept meaning it made me feel whole again. I doubt I ever did more that 20 repetitions of any of the movements (a few sets of 5-8 reps for each) and walked away feeling better than when I started.

Certainly, I moved this workout to Sunday many times due to travel or the onset of too many "wee drams" at the Highland Games, but the idea was to use the barbell to bring me into balance. I also used the hot tub and some cold showers, but the quick five lifts seem to put me back into place. 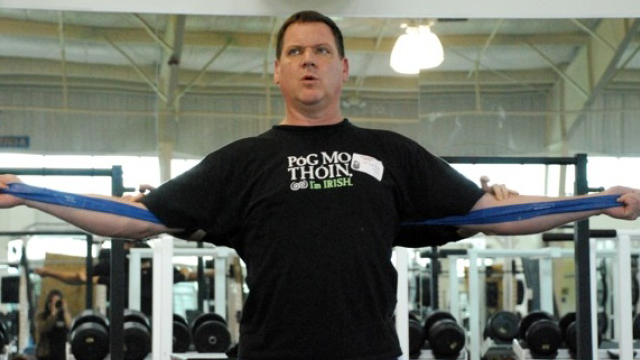 That's the role of correctives. If you need surgery, go see a doctor. If you're so misaligned that every breath makes you nauseous, address that with more than some toe wiggling. Correctives have great value, but keep an eye on the prize here.

Add some ground work, some half-kneeling effort, and some big movements that will keep you in the game – but keep the intensity up so that you can actually play the game, too.

Build and strengthen your hammies with the braced variation of this exercise. Here's how.
Tips, Training
Bret Contreras April 11

Once you master the muscle-up, progress by adding weight just as you would a pull-up.
CrossFit, Exercise Coaching, Tips
Drew Murphy January 2