The Job of a Strength Coach

A good strength coach needs to:

It's a delicate balance, and there's an art to writing programs that can accomplish both tasks effectively. Left to their own devices, however, many lifters struggle with number two.

For many, the goal is to grind through sets, put in the time, and continuously add weight to the bar – pain be damned.

It may not be right, but you have to respect that mentality. Lifting heavy shit is about getting outside of your comfort zone and overloading your muscles. There's a "pay your dues" component to gaining strength.

However, something that often gets glossed over is the preventive measures you can take to increase chances of long-term success in the gym, especially when it comes to knee health.

If you're someone who routinely lifts heavy things, your knees have barked at you one time or another. Here's a list of things to consider as well as some knee-saving tricks to add to your training repertoire.

It's virtually impossible not to squat without some forward knee migration of the tibia. But there's a huge difference between some and the point where the knees – and thus the tibia – go so far forward that the heels come off the ground. Pain is the determining factor here.

If someone walks into my facility complaining of chronic knee pain and I have them squat or lunge, I'm usually going to see an aberrant motor pattern in the form of an excessive amount of anterior translation of the tibia.

I'll need to regress things in order to teach them to maintain a more vertical shin angle. Stealing a line from Mike Robertson, "Stacked joints are happy joints."

Outside of the outliers in the crowd – elite Olympic weightlifters, for example – if someone squats to the point where the knees go way over the toes, it's going to cause excessive shear stress on the joint.

When this happens we see an increased incidence of patellofemoral pain. It usually requires re-engraining a good hip hinge pattern and trying to teach a more vertical shin angle.

I know some will argue, "Well, if you block the knees from going forward, the stress has to go somewhere, and the hips and low back will end up taking the brunt of the stress." This is true, and in some ways, a damned if you do, damned if you don't scenario.

But again, there will always be some forward movement of the knees, so let's avoid anything that's excessive. When someone is in pain, coach a more vertical tibia.

Moreover, the hips and low back should be strong enough to take on the load, which leads into the next point.

As a general rule, many of our traditional "injuries" that seem to be relentless and unresponsive to treatments may actually be evolving from a different location in the body than where the discomfort is actually experienced.

I call this the leaky roof syndrome. Sure, we can address the leak in one room by patching it up or placing a bucket nearby, but that doesn't resolve the underlying issue – the source of the leak itself, which is coming from another section of the house altogether.

The same analogy can be applied to the body. Many people who complain of chronic knee pain will head to their local physical therapist who will then dutifully administer treatments like IT band stretches and other cute (read: borderline pointless) exercises that will help strengthen the VMO.

This isn't to say that the two approaches aren't ever appropriate, but in this scenario, we could be missing the forest for the trees.

You can do all the foam rolling, stretching, and terminal knee extensions you can stomach (patching the leak) for the quick and temporary fix, but if you routinely fail to address the real issue – weak hips – you're just spinning your wheels. But your physical therapist appreciates you helping out with his BMW payments.

Often, weakness and dysfunction of the hip muscles, specifically the abductors and external rotators, is a leading cause of biomechanical faults at the knee and subsequent patellofemoral pain.

For some, this pain is due to a motor control deficit, and so unfortunately for some (who I sense rolling their eyes), you'll have to regress a bit, and add one of these "go to" exercises to your program – side lying clams. As innocuous as the exercise may seem, you'd be surprised as to how many people butcher its execution.

This doesn't mean we're stuck with solely doing corrective exercise, though. That's lame and about as fun as watching Olympic curling. With some subtle tweaks to a handful of exercises, we can make them more hip dominant, which in turn will help strengthen the hips and thus take the burden off the knees.

In addition to the side lying clam, many exercises can help in this regard, including side lying hip abductions, various lateral band walking drills, banded squats, and glute bridges. The goal here is to emphasis gluteal recruitment and get them more involved during movement.

One in particular that I like is the American deadlift. These are a fantastic way to encourage more posterior pelvic tilt which will not only help bring those in excessive anterior pelvic tilt into better alignment, but also strengthen the hips.

And speaking of anterior pelvic tilt, it's the exact mechanism that feeds into a vast majority of knee pain in the first place.

Most people perform their single-leg work with an upright torso, which isn't inherently wrong, just slightly flawed depending on the context. If someone exhibits faulty hip mechanics, and we then coach him to perform a lunge pattern in a way that feeds into said faulty hip mechanics, why do we then bark at said athlete when his knees cave in when he lunges?

What's more, coaching the lunge with a more upright posture only feeds into the extension pattern which, outside of the knee, doesn't do the lumbar spine (and more specifically the facet joints) any favors.

Instead, why not cue more of a hip hinge and slight forward lean to stay out of extension and to make the exercise more hip dominant? Implementing this slight tweak during your lunges will undoubtedly help place more emphasis on the hips, and thus strengthen them!

One of the best things you can do to keep your knees happy and healthy for the long haul is to stay on top of your movement quality as well as your hip (and ankle) mobility.

This is no easy task given the endless number of hours many of us are stuck sitting on our butt at home or at work, day in and day out. While traditional warm-ups and mobility work are fine, I'd be lying if I said I didn't secretly hate them. I do them, but sometimes I'd rather fold laundry.

To help make it more palatable, do more "flow" based warm-ups like these:

This breaks the monotony of a lot of warm-ups, makes them more time efficient, and cuts right to the chase and hammers the areas that tend to be more problematic for most people anyway (ankles, hips, t-spine).

Seems like a simple thing to avoid, right? You might think this is obvious, but if something hurts, don't do it!

The trouble is, having pain past a certain point of hip/knee flexion while squatting is common. However, I'm perfectly content with using a box to help them train in a pain-free ROM and still elicit a training effect.

Likewise, if someone has an underlying issue such as Femoral Acetabular Impingement (FAI), we're doing a major disservice to them if we allow them to squat past 90 degrees of hip flexion. This could greatly compromise the hips and by extension, the knees. In this sense, too, box squats would be a superb fit.

Something else to stick into your programming back pocket is isometric training. There are several key theories (key word: theories) behind implementing isometric holds into a program:

Whenever I work with someone whose knees are acting up, I'll almost always add in a dose of isometric training, the guidelines of which are detailed by Vladmir Zatsiorsky's in Science and Practice of Strength Training.

One of the key factors that we've implemented into our assessments has been to take a deeper look into hypermobility, or the "laxity" score of each individual.

Since we deal with a lot of overhead athletes at our facility, many of which would give a Cirque du Soleil performer a run for his or her money, it only makes sense that we take the degree of laxity or joint instability they present with into consideration when designing their programs.

And this absolutely applies to many non-athletes as well. How do you know if you're lax, though? I like to use the Beighton hypermobility scale to assess for both generalized congenital laxity and specific laxity at a joint.

The screen consists of five tests (four of which are unilateral), and it uses a 9-point system; the higher the score, the higher the laxity. Any score above 6 among young adults indicates a tendency towards hypermobility:

Stealing a line from Eric Cressey, "When you take someone who is really lax and implement aggressive static stretching, it's on par with having someone with a headache bang his/her head against a wall. It makes things worse."

So before you jump the gun and head off to your weekly hot yoga class, just consider that you may be doing more harm than good.

Should you train a muscle group or two per day or your entire body? Here are the pros and cons of each method.
Tips, Training
Tim Henriques July 10

Nail your abs, triceps and chest with this exercise combo you can do anywhere.
Tips, Training
Nick Tumminello February 21 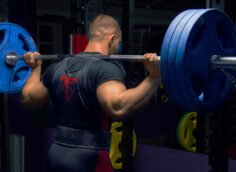 Sure, it's a big lift with big benefits, but is it worth doing with super high, heavy reps? Here's the truth about breathing squats.
Powerlifting & Strength, Squat
Christian Thibaudeau December 6

Place your elbows on a bench and allow a bit of bending in the knees for better activation and results.
Abs, Exercise Coaching, Tips
Pieter van der Linde December 21