Lifting novices often omit the more "complex" exercises that they don't understand how to perform or work their way into. Instead of deadlifting and squatting, they stick to machine and isolation exercises that don't require much coordination.

As experienced lifters, we make similar mistakes that slow our progress. We dismiss any exercise or new variation that reveals our weaknesses and forces us to use lighter loads.

Notice the pattern? If an exercise variation caused me to move down in weight or struggle with coordination, I kicked it to the curb rather than buckling down and sticking it out. Big mistake.

Don't be that lifter who only performs the lifts he's good at. Humble yourself, suck it up, and perform the lifts that expose your weaknesses. You'll be a stronger and healthier lifter over the long run. If you bring up your weak links, you'll keep your body in better balance and build well-rounded total body strength.

After twenty-plus years of lifting, I've matured as a lifter. I've finally learned to appreciate the variations that force me to struggle. Even though I'm weak at them, I'm proud of my steady progress.

I've realized that the lighter poundages associated with these exercises are easier on the body because they don't beat up the CNS so much. Hitting your weak links therefore allows you to train with greater frequency. Keep the following sets of related movements in mind:

If you're great at using your hips and sitting back in the squat, learn how to stay more upright and sit down in a squat (and go deeper), making better use of the knees.

Conversely, if you're great at using your quads and staying upright in a squat, learn how to sit back and make better use your posterior chain. Don't worry about the lighter loads you'll be forced to use as it'll pay off in time.

Similarly, chances are you're either better at conventional deadlifts than sumo deadlifts and trap-bar deadlifts, or vice versa. Conventional pulling relies more on back and hip strength, whereas sumo and trap bar pulling use the knees to a greater degree. Get strong at each of these variations.

Moreover, you're probably stronger at either the top or bottom range of motion (ROM). You want to be proficient at deficit deadlifts and rack pulls so your entire deadlift ROM is strong.

Some lifters use about the same weight for barbell hip thrusts and barbell glute bridges. Other lifters are far stronger at one or the other.

You should be slightly stronger with barbell glute bridges. If this isn't the case, then you're probably flinging the weight up and relying on flexed-range hip extension strength to power you through the hip thrust rather than using the glutes to squeeze the hips to an end-range of motion.

Some lifters feel their glutes working to a greater degree in a hip thrust compared to a barbell glute bridge (or vice versa). You want to learn to feel both movements target the glutes similarly.

Often lifters need to lighten the load and learn to use the glutes to extend the hips rather than using their erectors to tilt the pelvis anteriorly so that they place the hammies at longer lengths for better force production.

It helps in this situation to squeeze the abs and pause at the top of the movement for a one-second count with a giant glute squeeze. Getting proficient in posterior pelvic tilting mechanics helps improve bridging and thrusting prowess, too. This is why RKC planks and hollow body holds are useful.

There are lifters out there who can squat and deadlift a ton but can barely perform bodyweight single-leg squatting movements. At the minimum, you should be able to perform 10 rock-solid Bulgarian split squats with your own bodyweight.

Depending on their current fitness level and goals, not all lifters need to employ single-leg exercises, but you're definitely leaving room on the table for increased strength and performance if you haven't spent some time developing your single-leg strength.

Similarly, there are lifters out there who struggle to perform bodyweight back extensions and reverse hypers even though they're relatively strong at squats and deadlifts.

I'm not saying that your dumbbell pressing should equal your barbell loads, but if you can bench 315 pounds, yet only dumbbell bench with the 80's, you have some untapped potential.

You shouldn't be able to bust out more chin-ups than inverted rows. If your bodyweight chin-up strength far exceeds your bodyweight inverted row strength, prioritize rowing strength by performing rows multiple times per week to bring up your scapular retraction strength.

Knee-flexion strength isn't the most important thing, but it's important to possess a minimum level of hamstring strength. If you sink like a ship when performing Nordic Ham Curls (aka Russian Leg Curls), then you should perform a couple of sets a few times a week until you can control the eccentric portion of this exercise.

If you're like most lifters, you possess dramatic weak links, so continue to perform the lifts that you're great at, but sprinkle in the lifts you're not so good at and target your weaknesses.

Still, due to anthropometry, many lifters will always possess strength imbalances no matter how hard they attack their weaknesses. For example, a lifter with proportionately long femurs and long arms might never be a very great squatter, even if he squats three times per week for a decade.

However, that same lifter could develop freaky deadlift strength that would make most lifters envious in no time.

The take-home message is to learn to enjoy training your weak lifts and take pride in the gradual improvements you make in these exercises. You want to build your strength, not just demonstrate your strength, so aim for structural balance and be sure to prioritize the strengthening of weak links in the kinetic chain.

Here's are two functional strength exercises that are actually functional for athletes and everyone else who occasionally gets off the couch.
Powerlifting & Strength, Tips, Training
TJ Kuster January 24

Horrible setbacks can happen when you're pursuing strength. Are these stories horrific, or are they inspiring?
Powerlifting & Strength, Training
Matt Kroc December 13 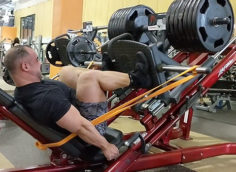