In the world of weight training, there are a handful of exercises which always make up the core of any solid program: squats, deadlifts, bench presses, overhead presses, rows, dips, and pull-ups. These are the big basics, the proven man-makers, and hopefully you include them in your yearly plan somewhere.

But there are other exercises out there. Some are brand spanking new, others are variations of old favorites, while still others are "forgotten" movements that deserve to be resurrected for a new generation. In this series, we present them all. They'll break you out of a rut, kill boredom in the gym and push you past just about any plateau. Try a couple out today!

The perfect or "complete" curl was invented by one of the first real gurus in the iron game, the late Vince Gironda. T-Nation readers may have first learned of this exercise from Christian Thibaudeau, who calls it the best biceps builder bar-none.

Before starting the movement, bring your upper torso backward, shifting your weight toward the heels. Now curl the weight up from that position. As you lift the weight you're going to slowly bend the upper torso forward so that in the end position the shoulders are in front of the hips and knees. You lower the bar using the opposite motion. Start in the torso forward position and as the bar is lowered, bring it to the backward position.

This change of lever during the movement really places a huge amount of tension on the biceps during the execution of the entire exercise. In the original version, Gironda wanted each rep to take approximately six seconds. Remember, perform this bad boy under control; it's not a cheat curl!

The external rotators are often undertrained or simply not trained at all. Not only can this lead to tendonitis and shoulder impingement, but at the very least you could develop some serious muscle imbalances around the shoulder. To help you isolate the external rotation muscles, some clever guys invented a device called the Shoulder Horn. Too damn broke to buy one? Here's the poor man's version.

To start, sit on a flat bench and bring one leg up and place the foot flat on the bench. Take a light dumbbell in the same hand and press your elbow into the inside of your knee. From this position, you can go through full ROM (range of motion) external rotations.

This is another great biceps curl variation you don't see used very often. As you curl the weight up, the bar must be kept in contact with the body at all times and the elbows should be kept as close to the torso as possible. This is why it's called a drag curl: you "drag" the bar up your body.

Squeeze extra hard in the peak contraction position. You lower the bar the same way, by keeping it in contact with the body. Both a regular and reverse grip can be used effectively. A shaved head isn't necessary, but it helps, especially if your biceps are roughly the same size as your big dome.

We picked this painful puppy up from Dave Tate. This is one of the best movements for the "lower" part of the triceps. If you ever get a chance to see a great bencher, take note of all that triceps mass right above the elbow. According to Tate, this is where big benches come from, not the upper part of the triceps. The elbows-out extension is designed to bring this area up to par.

We pinched this weird chest builder from Chad "Hoss" Waterbury. The slide push-up applies resistance to the horizontal adduction action of the pectorals, something most chest exercises just can't do.

To perform this one you need a couple of small towels and a linoleum or wood floor. One of those aerobic "slide" thingies popular with housewives a few years back will work too. Just put the little booties on your hands. We won't laugh. (Much.)

Assume a traditional push-up position with the towels under your hands, which should be slightly wider than shoulder-width apart. Lower yourself until your chest touches the floor, then push up while simultaneously pulling the hands together. At the top position, the thumbs should almost be touching.

Here's that crazy bastard Coach Davies's favorite way of performing good mornings: Zercher style! The term Zercher is usually applied to squats and they're performed by cradling the barbell in your arms and then squatting down.

To perform Zercher Good Mornings, you also hold the bar in the crook of your biceps, arms up tight to your chest. With your feet wider than shoulder-width, initiate the movement by pushing the buttocks back and lowering to the neutral position with the back at approximately 45 degrees. Concentrating on your hamstrings, come back up into the start position. This is a great hammie builder for bodybuilders and athletes alike!

Here's a great exercise to set your legs and lungs on fire. This is basically a barbell lunge where you jump up between reps and switch legs in mid-air.

Start from a jump squat position with roughly 30% of your 1RM dynamic barbell lunge. Explode up and extend one leg forward in mid-air. Upon landing, immediately drive upward, once again propelling yourself into the air where you'll extend the other leg forward. More fun than a panty raid at the Playboy Mansion!

This one is a lot tougher than it looks. Christian Thibaudeau calls it one of the best possible triceps exercises – and you don't even need any weights!

The photos explain it all; just make sure that you lift your body only by extending your arm at the elbow, not by pressing with the shoulders and chest. Take three seconds to lower your body and one second to bring it back up. Take as many seconds as you need between sets to cry like a baby and rub your aching tri's.

Add a few of these to your list of "man-makers" today! We dare ya! 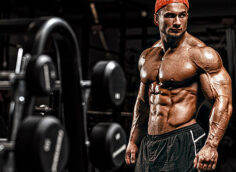 Tom Furman unearths and revitalizes an old forgotten technique to extend sets. Remember not to kill the messenger when the paralyzing pain hits you.
Training
Tom Furman March 22