If you've read the first three installments in this series and you've been trying out these untraditional exercises, then the other people in your gym probably think you're a nutcase by now. Of course, all these cool variations and new exercises will inevitably lead to new muscle growth, so at least they'll think you're a buff nutcase. In volume four, we keep the nuttiness rolling with several fresh movements you may not have tried before.

This movement was "discovered" by doing dumbbell pullovers the wrong way. With traditional pullovers, the lifter attempts to keep the arms relatively straight, but if he bends the elbows and keeps them fixed, he'll get one heck of a triceps exercise!

Lie on a flat bench and hold one dumbbell with both hands. The elbows should be pointed behind your head and the upper arms should remain relatively fixed throughout the movement. Lower the dumbbell into an extreme stretch position, pause, then bring it back up and squeeze your triceps for two seconds at the top. Given that the arms are kept at an angle, tension remains on the triceps for the entire movement. The end result is that the movement is much more effective than traditional seated dumbbell extensions.

Go heavy with this one and shoot for four to six reps per set. 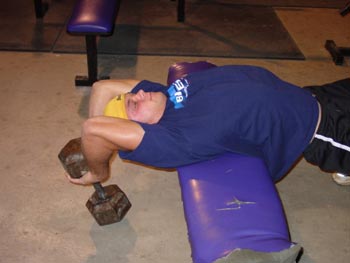 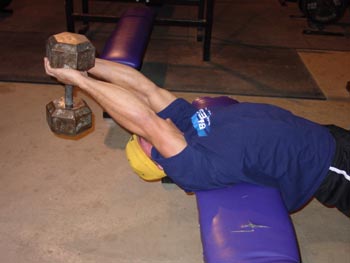 Take an incline bench and adjust it so that it's at a 60 to 70-degree angle. Then, after grabbing a pair of dumbbells, sit backward on the bench so that your chest is leaning against the bench. Let the dumbbells hang straight down, and using a hammer grip, curl both dumbbells up so that they touch your shoulders. 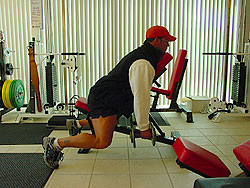 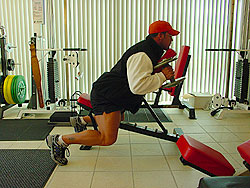 This is a cool movement for a variety of reasons. First of all, it's impossible to use body English on them. Secondly, it makes it really difficult to recruit the front deltoids, which allows for a more "pure" biceps movement. It also allows you to draw the elbows back a bit as you curl the weights up, which helps recruit the long head of the biceps, which seems to be underdeveloped in most bodybuilders. And lastly – and this is subtle – it forces you to straighten the arm out completely. Most lifters have some sort of a Popeye syndrome where they almost never fully extend their arms, but by doing this movement – straightening the arm out completely – it may actually feel like the elbow is hyperextended.

This one will set your back, biceps, and forearms on fire! All you need is a towel, a chin-up bar, and a high tolerance for pain. Now, without tying any knots in the towel, throw it over the bar. Grasp the towel and hang on tight. Now perform as many chin-ups as you can. After a few sets, when you can no longer pull yourself up, just grab the towel and hang off of it. Then call a cab, because you won't be able to steer your car home. 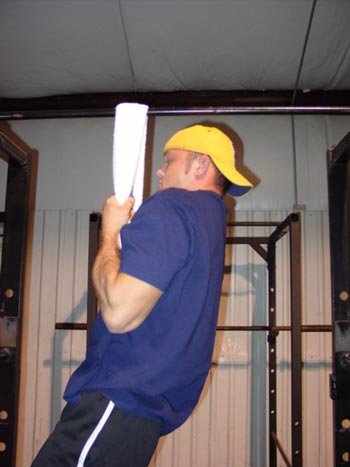 Charles Poliquin can do two things well: come up with unique exercises and bake brownies. (You should see the big guy in an apron. He's adorable we tell ya!) He refuses to let us post his brownie recipe here, but here's one of the unique chest movements he invented.

Lie back on a Swiss ball as if you were about to perform normal dumbbell bench presses. Press the dumbbells up and (here comes the interesting part) drop your hips until you're now in an incline position. Now lower the weights slowly. After a pause, roll back up to the "flat" bench position and start over. In effect, you're doing a flat bench on the way up and an incline bench on the way down.

Since you're weaker in the incline press than in the flat press position, you'll use the strong leverage from the flat position to help you get the load up in preparation for the eccentric part of the movement. A very cool use for the 'ol Swiss ball.

This is a great overall conditioning exercise we picked up from Coach John Davies. It also makes a good warm-up or finisher.

Hold two light dumbbells or plates in your hands and squat from a wide stance with the buttocks pushed back. Arms should be held straight ahead, parallel to the ground and thumbs up. As you squat up, push your hips forward while simultaneously moving your arms to the sides in a cross position. Return to the start position by moving in the precise inverse fashion and keeping your arms constantly parallel. 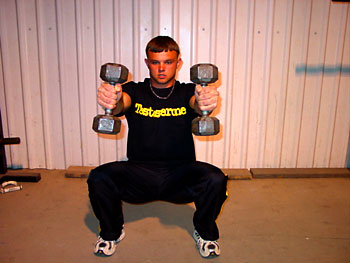 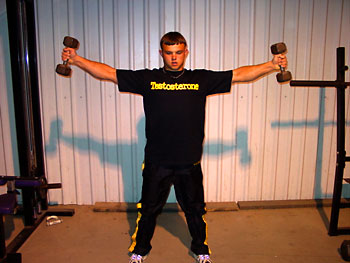 Cable Row to Neck with Rope

Here's an exercise 90% of gym rats should be using. Why? Because they probably spent a good part of their lifting careers doing a lot of bench presses and very little reciprocal work for the upper back (which can negatively affect posture.) Cable rows will make up for those youthful indiscretions.

Set an adjustable pulley so that it's directly in front of your pecs. Use a triceps rope – it'll reduce the stress on your forearms and wrists. Grab the ends of the rope as if you were grasping a pair of hammers. Start with the shoulders protracted and the forearms extended. Begin the movement by retracting the shoulder blades, and immediately bend the elbows to continue the movement until the forearms make contact with the upper arms.

Make sure to eliminate the lower back from the equation by keeping it perpendicular to the floor at all times. If the development of your rhomboids is lacking, you may choose to pause for a moment when the shoulder blades are retracted.

This is a very basic but very neglected core exercise that's great for athletes and bodybuilders alike. Lie on the floor facedown with your arms and legs outstretched. Lift your arms and legs as high as possible and hold them there for a three to five second count. Return to the floor and repeat. Leaping tall buildings with a single bound optional. 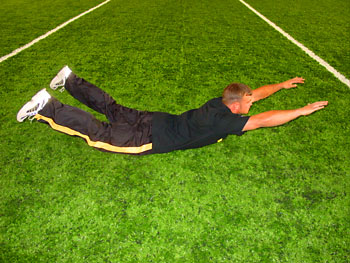 Grip strength isn't all about crushing power. It's also about finger power, or what some call "pinching" power. To improve finger strength, try doing plate pinches. Grab a pair of dimes (newbie translation: ten pound plates) and place them together, smooth side out. Hold them with your finger tips and keep them pinched together. That's probably easy, so now move up to a pair of quarters (25's). Keep track of how long you can hold them and each time you try it, see if you can squeeze out a few extra seconds. You're a certified bad ass if you can do it with 45s! 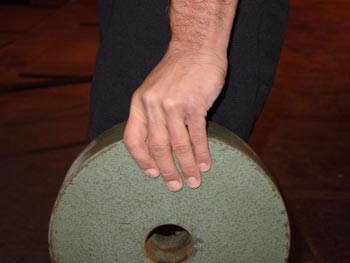 There you have it. Eight more movements to make you look like a weirdo (albeit a muscular one) in the gym. Enjoy! 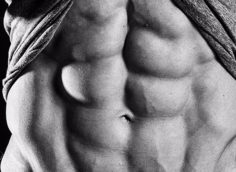