Back in 2002, the first Spiderman movie was the top box office draw, and T NATION launched the first installment of Exercises You've Never Tried.

It kinda brings big manly tears to our eyes, ya know? All the pain we've caused, the limp-inducing DOMS, the exquisite microtrauma.

High time for another one, don't you think? If your progress has stalled or you just need a new challenge, here are ten fresh movements to help you fill out that snazzy new T NATION shirt!

Want the best pump of your life while at the same time activating the highest percentage of motor units? Then take a tip from Coach Nick Tumminello and try mid-range partials.

The tension and burn here are going to be intense, so be prepared. Also, there's no stretch-shortening reflex at the bottom of each rep. Put all that together and you might have to use less weight at first than what you normally would. It's okay, we won't point and laugh. (Much.)

2 – The Double Down Pulldown

You know that to hit most of the back muscles, you need to do both a vertical pulling movement (pulldown or pull-up) and a horizontal pulling movement (a row variation.) The pulling angle of a pulldown or rowing motion significantly impacts the portion of the back that receives the most stimulation. So here's a unique movement we picked up from Christian Thibaudeau that combines a parallel pull and a perpendicular pull into one menacing exercise that stimulates the entire upper back.

A lever-type machine works well here; we used a Hammer Strength high row in our video. Why? According to Thibs, "The handles start far enough from your torso that you're able to lean forward significantly in the starting position. This forward lean will ensure that the lats are maximally stretched and that the pulling line remains as parallel to your torso as possible."

If your machine doesn't allow you to get into the right positions, just drop the seat and "hover" like a chick in a dirty bathroom.

Here's a crazy-ass little training trick we've seen pop up in several top powerlifting gyms. In fact, we know a few state record holders who swear by it.

Basically, this is just a few weight plates (or kettlebells) attached to a barbell with bands. T NATION contributor Craig Weller notes that the effect here has to be felt to be truly understood. He says benching with this set-up feels like having a wild animal tug on the bar as you move it.

How's it work? This benching method can be thought of as an injury preventer. The unstable, dynamic load places a huge emphasis on stabilization muscles as the entire shoulder girdle must fire maximally to keep the bar path tight and stable throughout the press.

It's also a great tool for lifters with shoulder issues and can be used to build work capacity in pressing movements. "With advanced lifters," Weller notes, "it's a novel stimulus that can force further neural adaptations and eventually greater strength."

Now, don't be a dumbass and injure yourself with this injury-prevention exercise. That would be embarrassing. Go light at first to get the hang of it, use a spotter, and only use this technique for the bench press. (It's just too tricky for the deadlift and squat.) Just focus on gripping the bar as hard as you can and maintaining maximal tightness throughout your body.

If you don't have bands and spare plates, just hang a few hungry babies and/or angry midgets from the bar. Same effect.

Breaking News! There are methods to build your traps besides standard shrugs and upright rows! Yes, for reals. Here's one of them: the dip shrug.

Hop onto a set of dipping bars. Hold yourself up by keeping your arms fully extended and locked. Let your body sink down between your arms. From there, push yourself up, trying to bring your chest as high as you can. Remember, the arms remain locked the whole time.

And if you're a real bad-ass and/or show-off, try the shrug dip in the L-sit gymnastic position.

And here's one more new way to build beastly traps. Position yourself as if you were going to perform a sumo deadlift: wide stance, hands inside the legs.

Lift the bar to mid-shin. From there, perform a shrug — try to bring your shoulders up — while keeping the exact same stance.

Yeah, people will stare. But in a few months they'll be staring at your big-ass traps!

Hold a medicine ball or dumbbell with both hands. Spread your feet about shoulder-width apart. Push your hips back, as if you were preparing to jump, and start the movement with the ball or dumbbell between your legs and as far back as you can reach. Now pull it upward as fast as you can until your arms are fully extended overhead. Immediately squat down for the next rep.

Abel notes: "You can do any number of variations. Change the angles by going from vertical to horizontal or diagonal. With cables or tubing, you can go high to low or low to high."

When you're doing diagonal chops — low to high or high to low — you can pivot on one foot to extend your range of motion. That involves both the front and rear oblique systems. The best benefit of doing choppers with a pivot is the simultaneous inclusion of both the anterior and posterior oblique systems.

And remember, the key here is speed. You want to emphasize acceleration and deceleration.

Yeah, push-ups are boring. And it's easy to out-grow them, so to speak.

Still, the classic push-up remains a favorite of coaches like Chad Waterbury, who uses it to train his athletes for explosive strength. Nick Tumminello adds that the push-up is often misunderstood and underutilized.

So how do you sex up the push-up? Try this pyramid challenge we picked up from Chris Cooper, CSCS.

Our favorite variation is to pause for two seconds in the bottom position instead of top. Ouch.

Want to take advantage of muscular tension, isometric potentiation, unilateral-enhanced neural drive, and other big words and phrases? Then check out this "new" way to curl!

Start with both arms in the fully flexed position — the "top" of the curl. Lower (eccentric phase) the working arm while keeping the non-working arm flexed. Curl up the working arm until both arms are once again flexed. Then switch arms and do the same thing. You keep on alternating this way until the set is completed.

The benefits, according to Coach Thibaudeau, are:

1. The biceps are under constant tension. While the non-lifting arm is "waiting its turn," it's still contracted isometrically.

2. You're performing a unilateral dynamic movement.

3. You're preceding the dynamic action by an isometric one.

The downside is that you can't use as much weight, so you won't create as much muscle damage. This is why it's important to use this exercise as a secondary biceps movement, after a heavier exercise.

Like it? Want a variation? Use the same technique with dumbbell preacher curls.

This one steals a page from Olympic lifting (an overhead press), combines it with a powerlifting technique (a limited range of motion, or ROM), and ends up with a kick-ass triceps exercise for size and strength... the partial overhead press.

To begin, perform a basic, standing overhead press using the same grip width and foot stance you'd use to do a complete set. From the lockout position, lower the bar until it just grazes the top of your hair, or the top of your chrome-dome for you poor, follicly challenged lifters. Press it straight back up, and you've done one rep.

The complete ROM is from your scalp to your arm's full extension... that's it. By keeping the movement shorter than a full overhead press, the focus stays on the triceps, while still allowing the use of heavy loads.

The subtle key to this exercise is to keep the bar directly overhead, in line with the ears, as opposed to pressing slightly in front of the body and looking upwards, like you'd do with a traditional military press. This helps to further disengage the delts and makes the triceps work that much harder.

Some lucky bastards have a glute-ham raise machine in their gyms. Others have good training partners and can perform the "natural" glute-ham raise. But some of you have neither, so what are you going to do? Just walk around with weak hams and a droopy ass? Heck no, you're going to go MacGyver instead!

Find yourself a pulldown machine or similar, adjust the lap pads, and — to the shock and horror of the ACE-certified personal trainers — start performing glute-ham raises!

The key here is to keep your torso tight and lower it slowly and under control. Your posterior chain (low back, glutes, and hams) should be screaming.

When you start nearing parallel, you're going to hit the floor. That's okay, just catch yourself smoothly in a push-up position, absorb the impact, and fling yourself back up. As soon as you can, contract the glutes and hams, letting them do the rest of the work, pulling you back to upright.

If the ACE-certified trainers give you shit, judo-toss them to the floor and use your muscular ass to pop their heads like bubble wrap.

Ten new exercises and nineteen more Exercises You've Never Tried articles in the archives. That should keep you busy for a while! 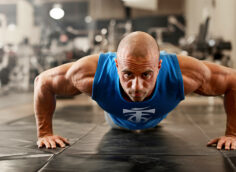 No, you're not too advanced for push-ups. In fact, you might not even finish these challenging push-up workouts. Take a look!
Chest, Exercise Coaching
Gareth Sapstead November 10

You need more volume to get big, but too much volume can mess you up. Here are 6 great movements that won't trash your CNS.
Bodybuilding, Powerlifting & Strength, Training
Jesse Irizarry September 4