Walk into any gym and take a look around. You'll probably see at least one person doing an exercise you've never seen before. Thing is, it's probably not a new, advanced training movement. Nope, it's probably a common exercise being performed with such poor form that it's unrecognizable!

That guy sitting backwards in the pulldown machine bringing the bar down to his crotch? Not a new exercise, just an idiot demonstrating said idiocy in public.

That frat boy who seems to be performing a combination of a deadlift and a high pull? No, that's not a unique complex movement; that's a guy curling with his ego instead of his muscles!

Well, below you won't find any of that nonsense. What you will find are several effective exercises that you probably haven't tried before. Give 'em a shot this week in the gym. And kick frat boy in the balls for us, will ya?

In the mid 1980's, the Barbarian Brothers were renowned for their gargantuan triceps, bench strength, fashion sense, and wonderful movies. Okay, two out of four ain't too bad.

This exercise was a mainstay in their routine. Additionally, 99% of all trainees have tight wrist pronators and wrist flexors. The backward grip used in this exercise can help fix that quickly according to Don Alessi.

With the bench set to 60 degrees incline, grasp the bar with hands 16" apart using an underhand, supinated grip. Lower the bar 2" under the collar bone, pause, and slowly press the bar to a full lockout.

Perform while wearing a mullet wig and a long sleeve crop top for maximal effectiveness.

We got this one from Mike Robertson, but he probably didn't invent it. He's really a big dumb animal.

Anyway, this one will make you hurt for a few days, so consider yourself forewarned. Position a barbell in a rack as if you're going to do squats. Instead of loading plates on both sides, though, put the weights on one side only. (You might want to double up on clamps just to be safe.) Position the bar across your upper traps with a relatively wide grip. Be sure to keep the scapulae retracted and upper back tight.

With the feet shoulder-width apart, do a side bend to the weighted side. Don't allow the knees to bow inward or the opposite hip to "slide" out. The legs should remain perpendicular to the floor the entire time.

Perform the desired number of reps and then switch over to the other side.

Position yourself on a shoulder press bench facing away from the high pulley machine. (That's "back toward the machine" for you meatheads.) Grasp an EZ swivel bar overhead with the elbows extended and close to your ears.

Next, flex the elbows behind the head and "curl" the load. Then, return to the extended position. Otherwise, you'll look silly sitting there all day.

Allen Hedrick, head S & C coach at the US Air Force Academy, uses this one a lot with his athletes.

Perform a standard dumbbell bench press movement, but rather than pressing both dumbbells simultaneously, alternate between pressing the dumbbells with the right and left hands.

Make sure to completely lower the right dumbbell back to the chest before pressing the left dumbbell away from the chest and visa versa. You may be surprised how challenging this exercise becomes when performed in this manner!

Chad Waterbury popularized this one, just like he did with the male thong, but that's a story for another day. When we've been drinking. Heavily.

Pretty straightforward here. The movement is similar to a skull crusher (triceps extension) only the dumbbells are brought to the chest instead of the head. Simple and effective, like a good hooker.

We got this one with Charles Poliquin. That's him in the pictures actually. He's a sexy bitch, isn't he? Just like us.

Okay, stand and hold a dumbbell in the non-dominant hand. Use the other hand to hold onto a power rack or something. If you're holding the dumbbell in the right hand, the left leg is forward in a semi-lunge position, and the left arm is extended at shoulder level holding on to the power rack post. This exercise allows for a greater range of motion in the pressing range than in the two-hand dumbbell press as the scapulae can move more freely.

The key here is to keep the hand in a neutral grip (semi-supinated), not a pronated grip (palms-down).

Make an extra effort to bring the biceps as close to your head as possible when you're nearly completing the concentric (lifting) range. Again, the extra range comes in handy to restore shoulder health. Don't wear a belt and make sure you keep the legs out of it! Once your legs are in the starting position, they don't move until the set is over.

This exercise is a rather strange one in that it works both the biceps and the medial delts. Okay, as far as a biceps movement, it's no great shakes, but it's a helluva' delt movement. The beauty of the movement is that it allows you to do a type of lateral raise, only using a much greater weight than might otherwise be possible.

If you're a big fan of lateral raises you've no doubt noticed that the concentric part of the movement (the actual lifting part) is a lot harder than the eccentric or lowering part of the movement. Well, funky chickens provide a solution to that problem.

Here's how you do them:

1) Grab a pair of dumbbells using a semi-supinated grip (with the palms facing your thighs).

2) Curl the weights up as if you were doing a traditional hammer curl.

3) Once you curl the weight to the top, flair out your elbows so they're parallel to the ground.

4) Now, extend the weights out until your arms are completely outstretched.

5) Lower the weights to the starting position and repeat steps 1-4.

Funky chickens will make you feel like you've been plucked, gutted, and fried up for Sunday dinner. Try them out and let us know how they work.

We learned this triceps exercise from Dave Tate. Think of it as a "finisher" movement or "feeder" workout.

It's a very effective movement to shuttle a lot of blood into the muscle without a lot of tissue breakdown. Because of this, it can be used very nicely multiple times per week without any negative effect on strength. Actually, Louie Simmons of Westside Barbell used to have some of his lifters do 100 rep band pushdowns daily when their bench would become stale.

To set this movement up, attach two bands around the top of a power rack, chin bar, or anything else that'll give you enough tension. Start on your knees. While keeping your elbows tucked, begin firing off alternate rep pressdowns. This is where the piston name comes from.

After reaching failure, stand up and keep going until you reach failure again. A few sets of these and you'll be jacked. Shoot for 20-30 reps per position.

This is performed similar to a traditional one-arm row with greater isolation on the lat fibers. In fact, many trainees tell us they never truly "felt" their lats before this exercise!

Grasp a dumbbell with a neutral grip with the left hand. Position the right hand and right knee onto a flat bench and arch the lower back slightly. Extend the left arm to its maximal end range. Using the left lat, slowly flex and retract the left arm to the left hip at the belt line. Pause two seconds in the top contracted position.

Don't forget to train the other side or people will point and laugh.

Nine "new" movements to confuse the A.C.E. certified personal trainers in your gym! Have fun. 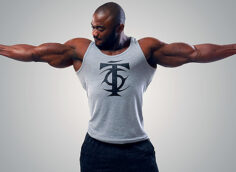 Biceps curls work... for a while. If yours have stopped growing, add these three non-curls to your training program.
Tanner Shuck July 29

This combo exercise will nail every part of your chest. Check it out.
Tips, Training
Dr John Rusin February 2 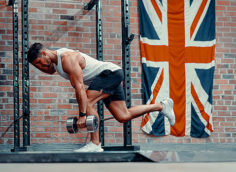 Build your glutes and bring up your hamstrings with this clever exercise variation. Check it out.
Training
Gareth Sapstead August 29