Saint Thomas Aquinas once wrote, “Beware the man with one book.” We’re going to bastardize that great quotation to better fit the fitness and bodybuilding community:

Beware the man with one exercise.

From strength imbalances to sub-par physique results, using a limited number of exercises (even good ones!) for long periods will give you only limited results. That’s one reason we started this article series, now in its sixteenth installment.

The Crossover And Overhead Lunge

Yes, real men need to train their hip abductors and adductors for performance gains, size increases, and injury prevention. But, they don’t need to train them in those sissified “ab/ad” machines built for fat chicks! Instead, use the crossover lunge we learned from Mike Robertson. 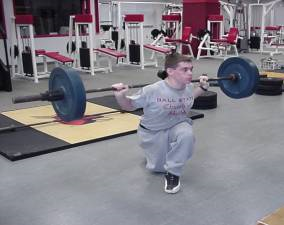 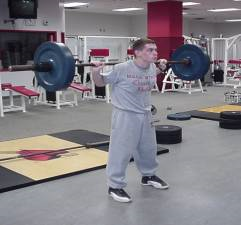 With the chest-up, lunge across the body. Land on the heel, drive off the heel, and don’t let your ego take over. This version of the lunge is one of the toughest to master with regards to coordination and performance.

Too easy for you, punk? Try an overhead lunge!

You’ve probably seen newbies do push-ups against a wall or using the Smith machine’s bar. Don’t laugh too hard; there’s something even the advanced guy can learn here. According to Eric Cressey, you can use this trick to work on your one-arm push-ups.

Just set the Smith machine bar at mid-height and perform your “push-ups” with one arm. As you progress, lower the bar to increase difficulty. Once you can do them on the floor, women will toss their panties at you and clap. Yep, happens every time. Especially if they’re hookers and you pay them.

Nothing new about a dumbbell press, but here’s a “fun” way to perform it that used to be a favorite of Coach Poliquin’s. This drill is really a combination of three exercises: the high incline, low incline, and flat bench press. All three are performed as one set, using the same weight. 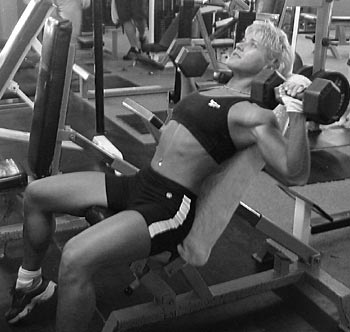 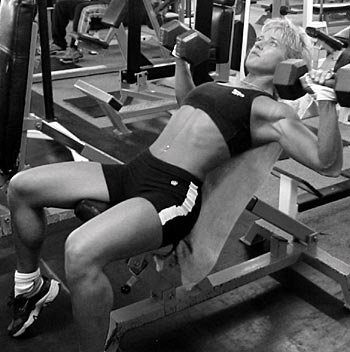 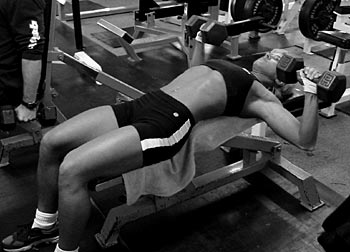 First perform high incline dumbbell presses until you reach muscle failure. Then rapidly adjust the bench to a low incline and continue to perform reps until failure. Finally, drop the bench to a flat position and knock out a few more reps.

This is one set. If one of your kidneys flies out your ass and smacks a personal trainer in the head, discontinue the set but give yourself ten points for accuracy.

Stuck without a rack and need to train legs? Try this doozy of an exercise we picked up from Coach Allen Hedrick. 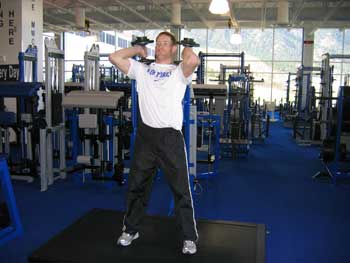 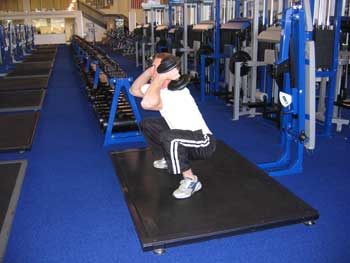 Clean the dumbbells to the shoulders. Assume a shoulder-width stance, arch the back, and keep the head up. Reach back with the hips and sit back into a squat position, keeping the heels on the floor and the knees behind the toes. Return to the start position and repeat.

Push-up Plus on Swiss Ball

Alwyn Cosgrove includes this exercise in programs used to address shoulder problems, but we’ve found it makes a good “finisher” as well. Just perform it after your normal chest workout. 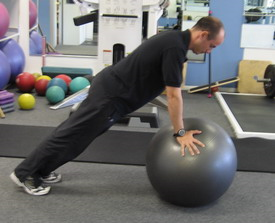 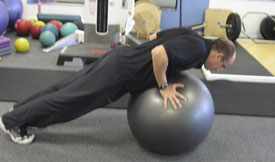 Basically, it’s just a push-up on a Swiss ball; however, at the end of the rep (the “plus” position), the shoulder blades should be pushed as far forward as possible. There should be no pause in either the stretched or contracted position.

Here’s a classic Ian King movement you might think is on the sissy side… until you try it. Performed correctly, this one will set your quads on fire!

Stand on the edge of a low block (one-third to one-half the height of a normal bench). Have one leg on the box and one off the edge. With your hands on your hips, bend at the knee, lowering down (two to three seconds) until the sole of your foot almost brushes the floor.

Keep the sole parallel to the ground. Pause for one second and return to full extension in about one to two seconds. At the tenth rep, pause at the bottom position for ten seconds. Don’t rest the non-supporting leg on the ground at any stage during the set! Then continue reps until you get to 20. Repeat the ten-second pause here.

If possible, don’t hold on to anything during the set. And keep a fire extinguisher close by!

Here’s an advanced ab exercise that may leave you on the floor the first time you try it. Try it anyway; it’s a good one! 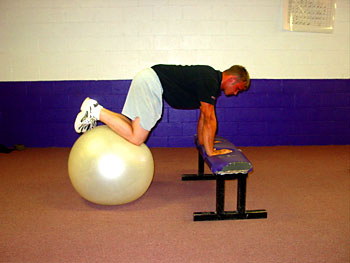 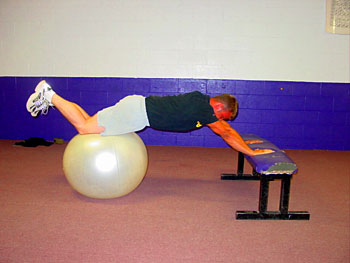 Place a stability ball in front of a bench. Now place both knees on the ball and both hands on the bench so you’re in “doggy position.” Keeping your hands parallel on the bench, arms straight, extend the knees backward until the body is almost straight from the shoulder to the knees. Reverse order and repeat until you squeal like a pig. 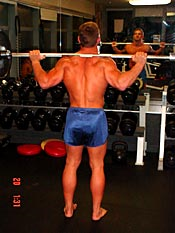 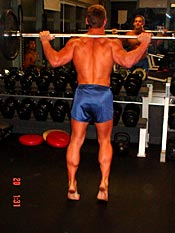 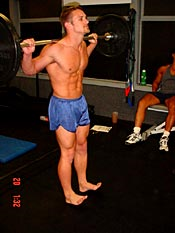 This is a great option for calf training that doesn’t require any stinkin’ machines. From a standing squat position with a barbell on your back, perform a standard calf raise. As you return your feet flat to the ground though, raise the toes off, hence “rocking back.”

Perform with caution and get the feel of the exercise as tempo should be slow with total control.

Here’s a core/trunk drill that’s an oldie but a goodie. Get into a push-up position on the ground. Keeping the body totally flat, raise one arm up. Ideally raise it to parallel to the ground in front of you, taking five seconds from take-off to landing. Bring the first arm down, then do the same with the other arm. Now try five second holds with one leg up, then the other. Lastly, raise the opposite arm and leg at the same time.

By the end of the sequence, you’ll have performed a total of six 5-second reps. You may want to repeat this cycle one or more times. Remember to keep the body flat, not allowing the hips to sag down.

Beware the man with one exercise. Also, beware the female bodybuilder with a bigger “package” than yours. That’s true wisdom, folks. Saint Thomas Aquinas would be jealous of our philosophizing skills.