Ever notice that almost everyone in your gym does the same lame exercises? Ever notice that most of them don't seem to be making much progress? Do you think that maybe, just maybe, those two things are related?  Hmmm....

Don' fall into that trap. Try a few of these little-used, but extremely effective exercises!

Here's an oldie but a goodie recently re-popularized by coaches like John Davies and Joe DeFranco.

The idea is to never press the bar all the way up so you keep tension on your shoulders. You can do this one standing or seated.

He's a great sit-up variation we picked up from athletic trainer Joe DeFranco.

Your arm action should resemble a sprinting motion. Every time you sit up counts as one rep. Try 3 sets of 20 reps with 30 seconds between sets.

The X-row is a unique alternative to the seated row or pulldown.  A tip of the hat to Don Alessi for this one!

Using a cable crossover set-up, grasp the left cable with your right hand and the right cable with your left hand. Kneel or sit two to three feet in front of the high cable with a swivel-mounted pulley. Simultaneously pull and cross the handles in front of your body until your hands reach the middle portion of your chest.

Make sure your shoulders are low so that there's minimal tension on your traps. Pause in the contracted position with the shoulder blades squeezed together hard. This one will really hit your back in a unique way!

Note: We recommend performing this exercise in gym clothes, not your "casual Friday" wear as shown above.

Yet another DeFranco gem! This one hits your chest, arms, rear delts and abdominal core.

Start by getting into a push-up position with your hands on two light dumbbells. Perform a traditional push-up. After you push yourself up, perform a sort of rear delt raise with one arm. Then go down into another push-up and come out of it with a rear dealt raise using the other arm.

This is a really, really tough one. Hexagonal dumbbells make it a little easier but not much. Be careful with this beast and shoot for a couple of sets of 4 to 10 reps.

TC gave us this deceptive exercise. It looks easy and even a little "wimpified," but it's tough and effective when performed correctly.

This movement is cool because it works both functions of the hamstrings in addition to the glutes. You simply attach one of those furry cuffs onto your ankle, attach a cable to the cuff, and face the weight stack at a slight angle. You'll also want to bend forward from the waist as much as possible (to stretch the hamstring at the hip and the knee).

Start the movement by extending the leg backwards and upwards as far as it'll go. Then, when you've extended the leg all the way, continue the exercise by curling the lower leg. Bring the heel as close to your bum as possible. (Remember to do the movement at a slight angle to the weight stack; otherwise, the cable will hit your kneecap when you curl it back!) Reverse the sequence – extend the lower leg until the leg is straight and then lower the entire leg to the starting position – and begin again.

We learned these two rotational strength exercises from Paul Chek. Both are great for the abs and obliques.

Begin this first exercise by lying supine on a Swiss ball with your shoulders in the middle of the ball. Put your hands together out in front of your body and begin rotating your torso left to right, making sure you don't drop your hips. You can make it more challenging by either speeding up the movement, placing a weight in your hands, or both.

You can also reverse things and rotate the lower torso.

This movement, courtesy of Charles Poliquin, is sort of like a concentration curl for the triceps, providing plenty of isolation.

To perform the overhead pressdown, place an incline bench in front of a high pulley so that when you sit down you're facing away from the machine. Grasp a straight bar handle and, with your upper arms glued to your torso, extend the forearms. You are, in essence, doing a fairly traditional pressdown, but doing it on an incline bench allows you to keep perfect form.

Throw this one in after your close grip bench presses or weighted triceps dips to really fry those muscle fibers!

Toss a few of these movements into your workout this week and stimulate some new muscle gains! 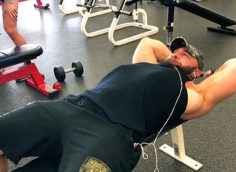 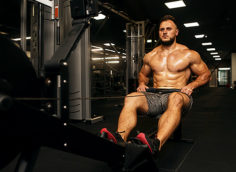 Believe or not, your rowing ergometer is a kickass core training tool too. Try these tough exercises!
Training
Justin Kompf March 12

Finish off your next shoulder workout with this exercise to really cap those delts.
Exercise Coaching, Tips
Mark Dugdale February 18