Part of my job as a strength coach is to not only help you get bigger, faster, and/or stronger, but with any luck, make someone of the opposite sex want to get naked in front of you – preferably on more than one occasion.

Moreover, another integral role of being a strength coach is being able to take complex topics and ideas, and dumb them down in a way that clients can easily understand and implement into their daily routine.

This can be anything, from helping the 140-pound college kid realize that following a body-part split which has him performing 18 different variations of biceps curls in one training session probably isn't the best approach to adding appreciable size, to explaining to someone that their chronic anterior knee pain is more than likely the culprit of their weak hip stabilizers, and not their VMO.

More importantly though, one of the things I take most pride in is being able to watch someone perform a specific lift, and then break it down and offer some quick coaching cues that will immediately improve their technique. Anyone who has read Malcolm Gladwell's phenomenal book, Blink, might recognize this skill as "thin slicing."

Put another way: I watch someone perform a lift with form that makes my eyes bleed from the cornea, and then I jump in and fix it on the spot. Like a ninja.

That said, below, I attempt to "thin slice" (so-to-speak) the "big three" (deadlifts, bench press, squats), and share a few of the common coaching cues we like to use at Cressey Performance to make them, for lack of a better term, "less vomit in my mouth-ish."

Lets begin with my favorite:

Cue #1: Place Your Shoulder Blades in Your Back Pocket

I wrote an article not too long ago titled, >The Dirty Dozen: 12 Tips for Heavier Pulls. In it, I discussed this whole notion of keeping the shoulders together and down when setting up for the lift.

In short, one of the most common mistakes I see lifters make is not setting up properly – part of which entails not getting the lats involved in the lift. As it is, getting the lats to fire helps to activate the thoraco-lumbar fascia, which in turn, keeps you much more stable throughout the duration of the set. 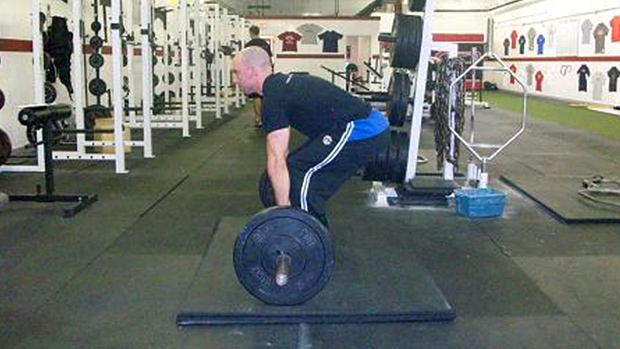 Unfortunately, there are many folks who don't quite get this concept, and as a result, their setup ends up looking like something from a B-grade horror flick.

It doesn't take a rocket scientist to see that this is far from an optimal position to pull from.

Conversely, the cue "place your shoulder blades in your back pocket," (scapulae together and down) establishes a much more conducive setup to pull. With that simple cue, we get a few things happening: 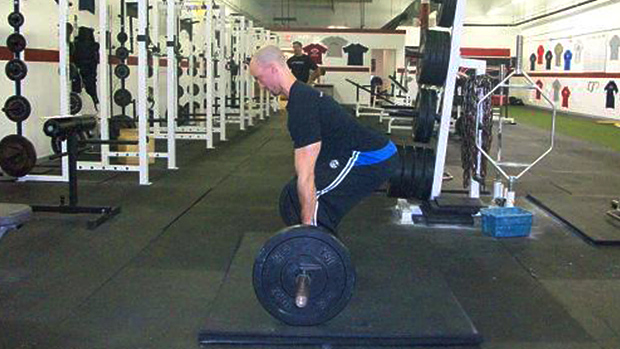 I automatically fix many common technique flaws with just that one cue. Moreover, anyone who says it's impossible to maintain a tight upper back with heavier loads can watch my 570-pound PR below and suck it.

Try it, I guarantee you'll notice the difference.

Granted, I don't have any peer-reviewed research to back this up (other than common sense), but it may come as a surprise to some of you that the deadlift isn't a squat.

For starters, unlike the squat, which typically starts with an eccentric motion, the deadlift is the exact opposite and starts with a concentric action.

Next, and more to the point, saying that the squat and deadlift are the same neglects many of the kinematic factors that make them unique: Namely, when training with heavier loads, the "sticking point" occurs at different hip, knee, and ankle positions.

Put another way, the squat generally has a more fluid, linear relationship between the hip and knee angles, while in contrast, the deadlift essentially has three distinct joint actions – the knees at liftoff, the hips when the barbell reaches knee height, and both the hips and knees simultaneously at lockout.(1)

Either way, one of the main flaws I see in most people's deadlift occurs when they start to initiate the descent back to the ground. After lockout, I often see trainees trying to "squat" the bar back down to the floor; that is, they'll break with their knees (essentially performing an anterior weight shift), which results in the bar having to travel around the knees, resembling more of a squat than a deadlift.

Instead, I like to use the simple, effective cue "sit back" when trying to teach the hip hinge pattern. More specifically, I tell them, "I want you to imagine I'm standing behind you with a rope around your waist. When you descend, pretend I'm pulling your hips back with the rope."

Effectively, what I'm teaching them to do is to incorporate a pattern that resembles more of a hip hinge/posterior weight shift. By doing so, we place a greater emphasis on the hamstrings and glutes, which as we all know, is the point of the deadlift in the first place.

If you're not used to it, it will definitely take some practice. But if this sounds like you, it's definitely going to be an ego check, and I highly suggest taking some weight off the bar until you're able to groove that proper hip hinge technique. It will make all the difference in the world.

Yeah, yeah, yeah, we've all heard the same cues before:

I know this may sound sacrilegious, but the bench press is my least favorite exercise. Admittedly, my bench numbers are nothing to brag about (damn you, long arms!), which may help explain my less-than-manly attitude.

Even so, I realize that for many the bench is what separates the men from the boys, and at the expense of temporarily losing my man-card for dissing it, I'd like to think that I've learned a thing or two on how to teach proper technique in the years I've been training clients and athletes.

Many of you reading may know that we train a lot of baseball players at Cressey Performance. As such, we don't allow our overhead athletes to perform any straight bar pressing for obvious reasons.

NOTE: Obvious reasons = because we said so.

(Okay, for those who need a more legit reason, using a straight bar forces the lifter to use a pronated grip, which causes more internal rotation of the glenohumeral joint. More internal rotation of the glenohumeral closes the "space" between the acromion and the rotator cuff. All told, not the most ideal scenario for a population that's already at an increased risk of shoulder impingement.)

We do, however, train our fair share of meatheads and weekend warriors, who for all intents are allowed to bench unless otherwise deemed "too risky" (due to postural concerns, past injury history, etc.).

Coincidentally, despite being the most popular exercise performed this side of every Monday, Wednesday, and Friday, I still see guys butchering this one the most.

As much as we'd like to think that the bench press is best for blasting the pecs, it's really more of a full-body movement. When done correctly, the bench press incorporates the entire body to systematically lower the bar under control, pause, and hoist it off the chest. That being the case, one of the best cues I ever learned – and one that I use quite often with my athletes – is one I stole from the guys at the South Side Gym in Connecticut when I trained there a few years ago:

"Pull the bar to the chest."

Many trainees just haphazardly "dive bomb" the bar down to their pecs and never really learn to use their upper back to assist in the movement. Furthermore, many flare their elbows out and/or perform the movement with their feet up in the air, in some misguided effort to "isolate their pecs" more. In reality, all you're really isolating is how retarded you look, not to mention increasing your chances of pissing your shoulder off in the long run.

Much like what I mentioned above with the deadlift, it's crucial to keep the upper back tight when benching. Again, the shoulders should be together and down, and you're essentially going to "row" the bar down towards your chest (again, without allowing the elbows to flare out).

In doing so, you'll keep the lats activated, provide a ton more stability (important for transferring force), and provide more of a "springboard" effect when you push the bar off the chest. It takes some getting used to, but once you master it, I promise you'll see your bench numbers soar.

Dan John often likes to tell the story of when a young lifter approached him one day explaining how squats always seemed to hurt his knees. After asking him to demonstrate his squat technique, Dan John simply stated, "Son, squatting doesn't hurt your knees. Whatever it is you're doing is hurting your knees."

Luckily, there are numerous articles here on Testosterone that discuss anything and everything related to squats. Even so, I want to hit on a couple of coaching cues that I've found invaluable for helping trainees improve their technique.

As someone who suffers from ihavethekneesofa90yearold-itis, you can imagine how much of an "Ah Ha!" moment I had when I first heard chiropractor, manual therapist, and competitive powerlifter, Charlie Weingroff, discuss this whole notion of the vertical shin angle not too long ago.

Simply put, when most trainees squat, thy tend to push their knees forward, causing their shins to migrate forward over their toes. While not necessarily a bad thing when working with healthy individuals, it does become an issue when you're dealing with someone with a history of patellofemoral pain.

As you can surmise, the resulting positive shin angle places a ton more sheer force on the joint – even more so when you add an external load such as a barbell on someone's back.

Nevertheless, attempting to maintain more of a vertical shin angle (where the knees stay behind the toes) throughout the duration of a set will take much undue stress off the joint itself, and go a long way towards long-term success with the lift.

As a coaching tool, I think box squats are the perfect movement to teach beginners to squat with picture-perfect technique. By doing so, we cement the vertical shin angle (see above), engage the posterior chain to a greater degree, and more importantly, keep people honest with achieving proper depth (and I hate to be a Jonny Raincloud here, but the vast majority of you reading this don't even come close to proper depth on your squats. Just sayin'.)

With the box squat, however, comes a multitude of errors and flaws in technique. As an example, we can look at how one lands on the box itself. Often, on the descent, I'll see trainees just "plop" on the box.

Outside of the obvious (making their spine hate them), we can see how form gets sloppy when one doesn't control the lift – particularly when discussing the transition between the eccentric and concentric portion of the lift. Additionally, the lifter loses all sense of "tightness" at the bottom of the lift and usually ends up "rocking" off the box.

To help alleviate this problem, I'll use the phrase "pretend like you're sitting on broken glass." By doing so, the lifter will learn to slow down and control the weight down to the box, landing softly. At the same time, I'll cue them to "push their knees out" to the left and right to open up the hips and engage the hamstrings a little more – all of which helps to maintain "stiffness" throughout the duration of the set.

In the end, while the cues discussed above are by no means an exhaustive list, I feel quite confident that they'll help many of you out in the long run. Try them out today, and let me know what you think!