Testosterone Nation is without a doubt one of the premiere
fitness information sources in the world. It doesn't matter if
your goal is to get bigger, stronger, faster, leaner, or healthier,
the top names in the field are here to help you.

But I've always thought that one person in particular could
really boost T-Nation's status and training IQ. I'm
referring to none other than Pavel Tsatsouline.

When it comes to novel strength training information, Pavel is
one of the most sought-after and highly respected people in the
world. He brought kettlebells to the forefront of the fitness
industry and he knows, probably better than anyone, how to coalesce
old-school Russian strength training methods with modern science.
His success is virtually unparalleled in the strength and
conditioning community.

That brings me to this article. I wanted to write about
eccentrics and how they should and shouldn't be used, but I
didn't want to simply rehash the same old information.
Furthermore, I've got my own views on eccentrics that
don't necessarily conform to what many other coaches advocate.

So in an effort to keep the discussion open and unbiased, I
didn't want to be a lone voice in this article. I wanted to
include another perspective from someone whose opinion on the
subject I respect. Therefore, I asked Pavel to write this article
with me and he agreed wholeheartedly. That's good for all of
us because his voice needs to be heard more on T-Nation.

This article is structured a little differently. I'm going
to give my perspective on eccentrics, and then Pavel will give his
say.

Finally, I must mention that T-Nation pays me handsomely for my
articles. After Pavel agreed to write this article with me, I told
him that he'd get half of my compensation. "Donate my part to
the Salvation Army," he replied. That's the kind of
person Pavel Tsatsouline is.

I'm happy to have him along for the ride on this special
article. Here we go!

Chad Waterbury: The Truth About "Negatives"

There are three primary types of contractions: concentric
(shortening), isometric (unchanging), and eccentric (lengthening).
With regard to science, research, and in-the-trenches experience,
any fitness expert can tell you that eccentric contractions
(essentially, lowering the weight) represent a unique
animal.

In fact, one of the most revered neurophysiologists in the
world, Dr. Roger Enoka, has gone so far as to say that the nervous
system might regulate eccentric contractions differently than all
other contractions. (1) But I'm getting ahead of myself.
Let's break this topic down into useful tidbits of
information.

There's little doubt that eccentric contractions result in
the greatest amount of muscle damage, known as delayed onset muscle
soreness (DOMS). If you've ever taken a long hike on terrain
that was anything but flat, you probably experienced some serious
DOMS in your quads 24 to 48 hours after the downhill portion of the
trek. After the hike you probably relished in your newfound
soreness and figured it was only a matter of time before people
would be referring to you as the next Tom Platz.

So if you're keeping score at home, the eccentric and
concentric phases of a lift should be performed fast for
maximum hypertrophy. Now you know why I'm such a stickler for
performing each repetition as fast as possible — it leads to
greater hypertrophy!

My training methods are constantly evolving. One of the most
dramatic changes I've made with my clients is with their
repetition speed. My postulate is that fast contractions in both
phases, while avoiding failure, is what leads to the most
hypertrophy.

This is certainly not the case, however, when we're talking
about rehabilitation or extreme endurance training. But if you have
healthy joints, and if you want to gain as much size and strength
as possible, start performing your repetitions as fast as the
training load allows.

With regard to loads, if you want to quickly gain size and
strength you can't go wrong by limiting your reps to less than
10 per set. I like to use a myriad of rep ranges and combinations
for various goals, but one of my favorites to build bigger,
stronger muscles is the 3-6-9 Method that I discussed in Alwyn Cosgrove's incredible project Lift Strong.

Let's get back to eccentrics.

I've spent many years experimenting with numerous
variations of eccentric contractions. I've emphasized the
phase by either slowing down the eccentric or by overloading the
phase with weight releasers. I've also experimented
extensively with negative-only training.

My conclusion? The eccentric phase does not need to be
emphasized for the purpose of enhancing size and strength.
Don't get me wrong, the eccentric phase is just as important
— maybe even more important — as the concentric phase,
but the stimulus it receives with traditional, fast contractions
takes care of all your training needs.

If you do emphasize the eccentric phase, it can lead to
excessive DOMS, and that's something that doesn't pair
well with frequent training sessions. By emphasizing the eccentric
phase with slow tempos or supramaximal loads, you're only
extending your recovery period as your immune system deals with
excessive muscle soreness, elevated creatine kinase activity, and
limb swelling. I'm not a fan of any strategy that augments the
recovery period.

My bottom line on eccentric contractions:

2. Perform the eccentric phase as fast as possible while
controlling the movement.

3. There's no correlation between excessive,
eccentric-induced soreness and hypertrophy.

Research on eccentrics -- or "yielding exercises" as
Russians call them -- is inconclusive, probably because of strength
training specificity. A three-month experiment was conducted in the
Soviet Union (Ivanov, 1966) to compare the strength gains from
concentric, eccentric, and isometric training.

Three exercises were used and all three showed different
results. Eccentrics trumped concentrics and isometrics in the
squat. In the deadlift, eccentrics came in second, and standing
vertical jumps went down from negatives! Professor Verkhoshansky
concluded that "this data does not so much demonstrate the
effectiveness of yielding work as quite convincingly corroborate
the neuromotor specificity of strength... "

The primary benefit of negatives is preparing yourself for your
future max, psychologically and neurologically. In my opinion, Rick
Weil's method is the safest and most effective for most
powerlifters and power bodybuilders. Weil was the first man to
bench triple bodyweight: 551 pounds at 181, raw!

Following his low rep work sets he'd do only one or (at the
most) two negatives with up to 110% of his max. I want to point out
that this is a conservative number as one can usually lower
120-140% of 1RM.

"One or two sets (of singles) per workout is plenty,"
insists the great bencher. "It will strengthen your tendons
and prepare you mentally for the day when you will be benching the
heavier weight. Remember to stay very tight during the approach; do
not relax at your chest. The negatives will help
here."

Years later, Joe McAuliffe followed Weil's example: one or
two singles 15-20% heavier than his work sets (not his 1RM).
McAuliffe believes that these negatives helped him break the IPF
world record that had stood for 25 years.

These champions coaxed their Golgi tendon organs, the governors
of strength, to get used to more tension without shutting down the
muscles. Contrast this coolheaded approach with typical gym idiocy.
A clown loads the bar with 100 pounds over his max and collapses
halfway down. Where the champs have taught themselves to succeed,
the show-off teaches himself to fail.

My bottom line on negatives:

1. Chase your low-rep work sets down with one or two singles
with a weight slightly in excess of your max, up to 110% of 1RM.

2. Don't free fall and don't go super slow. Lower the
bar at the pace you always use for benching your max.

3. Don't simply yield to the weight but actively pull
yourself down with your lats in the bench press. In the squat, do
the same with your hip flexors and hamstrings: pull yourself down.
This makes you stronger through the phenomenon of "successive
induction" that I've explained in my book, Beyond
Bodybuilding.

4. Lower the weight with the intention of pressing it back up.
Don't try to press it, but be mentally ready. Stay tight
throughout the range of motion and don't lose any tension near
the bottom. If you do you'll defeat the purpose — learning to
get tight enough for a bigger max.

5. Don't do this too often; once every week or two is
enough. Zatsiorsky notes that negatives made up only 1% of the
training volume of the Soviet national weightlifting team.

Negatives are a powerful medicine: take in
moderation. 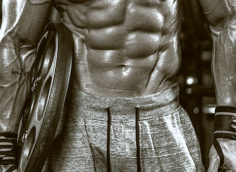 Get your lifts up, get your gains up, and move the bar faster. Do the clean and press to get better at everything.
Overhead Press, Powerlifting & Strength, Training
David C Scott June 18