The purpose of this column is tri-fold. Purpose number one is as a "refresher course" for seasoned lifters. Sure, deep down, you may know this stuff, but it's been so long since you first read about it that you've forgotten the rationale behind the subject matter.

Secondly, this column's for those readers who have just graduated from the newsstand mags. Maybe they've been reading nothing but "Muscle and Fitness" for the past few years, and as such, know pretty much nothing about the science of the sport, except for maybe the "science" of Mr. Olympia Ronnie Coleman's glute training.

Lastly, this column is for the newbie who may have stumbled onto this site and mistakenly thought he'd landed on some weird planet populated by a strange breed of weight lifting rocket scientists who, at times, slip into surfer dialect. By reading this column, the newbie can be acclimated to the rarefied atmosphere, slowly, so he doesn't get the bends.

The world and its people keep changing, or so they tell me. I'm always changing, too. For instance, I used to wear Garfield underwear, but now I wear Sylvester the cat underwear. In either case, though, there's always a little bulging-eyed kitty covering my crotch. I change physically, too. During different years or different times of the year, I'm either heavier or leaner, more muscular and less defined, or a tiny bit less muscular and more defined. Either way, it's me calling the shots.

I am the captain of my physical ship.

The only people that don't change, allegedly, are dead. I think there's another category of people that don't change, though. They hang out at gyms, and the look the same, month after month, year after year, despite appearing to be quite alive. Oh, once in awhile, they'll adopt some new training program they read about in MuscleMag, but it won't make a whit of difference in their muscularity or their body-fat levels.

It's really quite sad, especially since most of them could make one minor change in their training that could potentially make all the difference in the world.

It all has to do with the eccentric, and despite what you might initially think, I'm not talking about the type of eccentric exemplified by the guy in the corner of the gym wearing a toilet seat cover around his neck while muttering to himself about how the "damn squirrels keep burrowing into his pants."

Conversely, when you lower a weight, you're performing an eccentric movement and the muscle or muscles involved lengthen.

You've probably noticed that most people don't care a lick about eccentric contractions, or lowering the weight in general. While most struggle to lift a weight, they'll let if fall to the earth like some wise guy dropping a pumpkin onto your head from atop a tall building. After all, what we do in the gym is called lifting weights, not lowering weights.

That's too bad, because from a muscle-building standpoint, lowering the weight in a controlled fashion is a lot more important than lifting it.

Changes in muscle strength are largely a result of muscle hypertrophy, or simply put, a muscle getting bigger. A lot of people think that muscles get bigger because primitive largely unspecified cells called satellite cells get recruited and slap themselves into or onto a muscle, thus making it bigger in the same way a plasterer might thicken a wall by slapping more plaster on it.

That does happen, but the most important way a muscle gets bigger is by increasing the size of the individual fibers that make up a muscle. That doesn't usually happen unless something causes the muscle fiber to get "injured." There are a whole lot of facts and a whole lot of theories behind it, but suffice it to say, when a muscle fiber gets "injured" through exercise, it grows back bigger, better, and stronger.

In order for this to happen, a muscle has to be exposed to high tension.

Given a heavy weight, in which cases do you think the tension on a muscle fiber would be greatest? Think of it terms of a rubber band: when a rubber band lengthens beyond a certain point because you're yanking on it, tension gets very high and it starts to fray. If you don't reduce the tension immediately, the rubber band breaks.

It's the same way with muscle fibers. If you stretch them, using a heavy weight, tensions get very high and the fibers start to fray. The muscle fibers get "injured." When you shorten the muscle fiber, tension drops dramatically.

However, if you're the type of person who lifts a weight and then lets gravity take it back to the starting point, tensions never get very high, muscle fibers don't get damaged, and they don't get bigger.

You've no doubt experienced muscle soreness after a workout, and this soreness is almost always a result of some degree of eccentric exercise. You might have even gotten sore from walking or running downhill. This is because walking, especially downhill, causes eccentric contractions with resulting muscle fiber damage. Your foot strikes the downward sloping ground, the momentum of the body carries it forward, and the main upper leg muscles known as the quadriceps lengthen (which causes great tension and some muscle-fiber damage).

Most often this soreness, known among muscle physiologists as Delayed Onset Muscle Soreness, or DOMS, occurs between 24 and 48 hours after eccentric exercise. Why you actually feel soreness is unknown (whether it has to do with chemicals released or nerve impulses), but what is known is that the soreness is associated with disrupted muscle fibers.

We also don't exactly know why muscle fibers get damaged during eccentric contractions. After all, why should using muscles for the very purpose they were created result in damage? We do have some theories, though. The one I lean toward has to do with a chemical called ATP, which is the chemical that allows all movement, in all animals, to take place. It literally stores one of the components of energy.

Anyhow, here's what I think happens:

• During exercise, muscle fibers gets chemically "tired." In other words, they're not able to generate more ATP.

• Because they can't generate any more ATP, they get as stiff as Joe Weider at a rave.

• Further stretching of these stiff fibers, courtesy of eccentric exercise, disrupts the fibers.

Given proper rest and proper nutrition, these fibers heal, but in doing so, they get bigger and protect themselves against further muscle damage the next time you do the same exercise.

(This leads to an entirely different topic, but suffice it to say that this phenomenon suggests that exercise routines should be changed often so that the trainee can continue to take advantage of the hypertrophy that results from muscle damage.)

So it's clear that lowering the weight slowly is a good idea if muscle growth is what you're after.

Let me draw another example that you may be able to relate to. Have you ever watched Olympic weightlifting on television and thought to yourself, "Man, some of those dudes don't look that muscular or that strong. How is it that they can lift that much weight?"

Well, powerlifters and Olympic weightlifters usually don't give a damn about the eccentric portion of a lift. They just want to get it up, and after they get it there, they usually let gravity do the hard work. As such, they don't work the eccentric portion of their lifts nearly as often as bodybuilders, and as such, they don't experience the same level of muscular hypertrophy.

There's no arguing that they're not incredibly strong, though. That's because strength has a lot to do with your nervous system, how efficient it is, and how many muscle fibers it can recruit to lift a heavy weight. It follows that good powerlifters and Olympic lifters have insane nervous systems.

I don't want to stray off the track too much here, so let's get back to eccentric movements and tension. While I've stressed lowering a weight slowly, it also makes sense that the weight has to be fairly heavy to elicit this muscle-fiber stretching and the resultant damage. In endurance weight-lifting protocols, the weight used is far too light to elicit much tension, regardless of how slow one lowers it. As a result, few fibers are recruited, and those that are don't experience enough tension to cause muscle damage. Consequently, those rep-range protocols of 15-20 reps or more aren't going to do much in increasing strength or muscle size.

That's all fine and dandy, but if you suddenly start doing slow eccentric reps, you increase the time under tension (TUT). Suddenly, you're doing reps that take 4 seconds, 5, possibly 10 seconds or more, and doing 8 to 12 of these slow reps would have you lifting straight from afternoon reruns of The Andy Griffith Show all the way into the prime time showing of E.R.

Therefore, we should probably pay more attention to TUT than we do to actual rep ranges. For the purposes of building muscle, it seems that the ideal time under tension (high tension) is anywhere from 35 to 55 seconds. That means that most of the time, sets should take that long, regardless of the actual number of reps you're doing.

Here are a couple of examples of varying rep schemes that have the same time under tension:

• 10 reps of biceps curls taking 1 second to lift the weight and 3 seconds to lower the weight (for a total of 40 seconds time under tension).

There are virtually infinite numbers of combinations, but lest you get confused, just remember these two things: when planning your workouts, control the weight on the way down – taking at least 2 to 3 seconds to lower the weight – and use resistance that allows you do keep time under tension between roughly 35 and 55 seconds per set.

(However, at the risk of complicating things, no rule should be followed all the time. There are periods when you may want to train your nervous system – in other words, build strength – by doing rep ranges that allow for a shorter TUT, and there are times when you may want to build endurance by striving for a longer TUT, depending on your goals at that particular point in your training.)

You might think that these things seem minor in comparison with specific exercises or training splits or even diet, but they're not. Absolutely nothing shy of chemical assistance will change your physique as quickly as paying attention to the eccentric phase and time under tension.

Warm up your shoulders and keep them mobile with this drill. Walk your feet out or elevate them to increase the challenge.
Exercise Coaching, Mobility, Shoulders, Tips
Tom Morrison November 16

This variation of the ab rollout is intense because you spend more time in the toughest part of the movement.
Abs, Exercise Coaching, Tips
Drew Murphy July 8

It's one of the toughest muscle groups to build. We ask 10 experts for their single best tip for building quads. Check out their answers.
Bodybuilding, Legs, Training
T Nation March 24 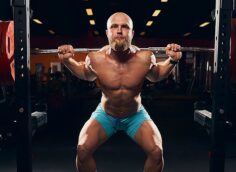 You might feel yourself doing it. You might even be okay with it happening at this point. But that's a problem. Fix your squat like this.
Tom Morrison June 16