Most trainers and coaches believe that this is a complete ab training program:

Sure, anti-spinal movement exercises are great for helping to improve the function of the trunk musculature. They improve the ability to remain stiff in order to allow the spine to bear greater loads (4) and to transfer force between the hips and the shoulders.

However, isometric exercises (planks, side planks, Pallof presses) are only half of the complete core-strengthening puzzle. Why? Because the torso musculature doesn't just transfer force and reduce force by limiting movement (through isometric action), it also helps to produce force by creating motion – dynamic movement (5).

In short, anti-movement exercises are just isometrics. And, although isometric training certainly can lead to strength gains (1), the gains are fairly joint angle-specific to the trained position (1,2,3).

Be aware, though, that your core-training routine must hit each of these categories to be comprehensive. A well-rounded routine covers the major types of movement performed by your torso and coordinates the muscles that make those movements possible.

Note: Everyone uses the term "core," but most are unaware that it was coined some 30 years ago to describe the muscles that make up the center of the body and control the head, neck, ribs, spine, and pelvis. So your core isn't just your abs and lower back; rather, it consists of all the muscles in your torso, including your chest, shoulders, lats, mid-back, glutes, lower back, abs, and obliques.

So, the exercises presented here focus on helping you maximize the strength of your abdominals and obliques, and they also help you improve your rotational strength and power.

Although some coaches claim that spinal flexion exercises are inherently dangerous, research has shown that those exercises can not only help promote nutrient delivery to the intervertebral discs, but may also provide superior muscle and performance gains versus isomeric ab exercises (4).

However, some exercises may be contraindicated for people who have pain when performing them. In other words, spinal flexion exercises are no different than any other resistance training exercise. All exercises can induce stress, which causes tissue adaptation, but there's a tipping point where you exceed your capacity. That's the individual nature of training, and exactly what's meant by training smart!

Keep your knees bent at roughly a 90-degree angle throughout and flex and extend your spine with control over the ball. Hold the plate straight above your shoulders and reach your arms straight up toward the sky. Focus on making your knees drive the motion (bending and extending), not your abs.

Most people use momentum and jerk their body up and down by kicking their legs to create the movement. Eliminating that momentum forces the abs to perform the action.

Once you get your legs up over your body, slowly reverse this motion, lowering your spine back down toward the bench, one vertebra at a time. Don't allow your legs to extend or your head to lift off the ball at any point.

These spinal flexion exercises are my go-to movements because they allow for greater abdominal muscle stretch than floor crunches. This is important because full-range resistance training regimens, which train the muscles at long (stretched) lengths and include an eccentric component, can improve flexibility as well as, if not better than, typical static stretching.

In other words, strength training at longer (stretched) muscle lengths (that includes an eccentric component) not only causes muscles to be stronger at long lengths, but also promotes flexibility by causing muscle fibers to produce new sarcomeres in series within a muscle, which allows the muscle to lengthen more (6, 7).

A great example of a common exercise that doesn't make biomechanical sense is side bends performed while holding a dumbbell on each side. Of course, the weight of the dumbbell offsets the weight on the other side, making this exercise ineffective at sufficiently loading the lateral flexors of the torso.

Even performing side bends while holding a single dumbbell on one side of the body isn't very effective at targeting the lateral core because of the angle of force involved. There's just not much resistance. The dumbbell is very close to your body, giving you a mechanical advantage over the weight. You'd have to hold a very heavy weight, which may exceed your grip strength, to have a reasonable training effect.

So instead of using dumbbells, use a single cable that's at roughly a 45-degree angle to your body. It's much more effective than holding a single dumbbell (or two).

This exercise creates a great stretch on the lateral trunk flexors. If you've never done this one before, it can feel a bit awkward until you find the right foot placement against the wall and the right body position over the ball.

Place your top leg about a foot-length behind your bottom leg and keep your back heel slightly off the wall while your front foot is flat against the wall. Also, position your torso over the ball such that you can create a stretch while bending over the ball without feeling like you're going to fall over it. Lastly, make sure you move over the ball, instead of the ball moving under you.

Yes, this is like doing the "I'm a little teapot" dance you did as a kid. With your feet roughly hip-width apart, hold the weight plate or medicine ball directly above your head with your elbows slightly bent.

While keeping the weight plate or ball directly above your head, lean your body laterally to one side and shift your hips to the opposite side until you feel a mild stretch.

Reverse the motion and repeat, leaning your torso and hips to the opposite direction without pausing in the middle between reps.

Rotary exercises are by nature cross-body exercises, which makes them a valuable aspect of strength training since rotation is such a big part of human functioning and athletics.

This variation has four adjustments: a wider stance, a weight shift as you rotate, reduced rotational range of motion, and a rotation that involves both the hip and shoulders instead of just the shoulders.

The wider stance gives you a larger base of support, which allows you to move heavier loads and provides a greater strength challenge to your torso muscles. Keeping your torso nearly perpendicular to the cable maintains high levels of rotational tension, helping you make better use of your time.

Lastly, we move the hips in the same direction and at the same speed as your shoulders, which is similar to how we produce high levels of power and strength in athletics.

This exercise, which involves two positions that can be done as a superset or separately, fills in the gaps in rotational ranges of motion left by the preceding rotational movement.

Stand facing the cable, grabbing the handle first with your right hand, then place your left hand overtop your right. Rotate your torso to the right while pivoting on the ball of your left foot.

To maximally load the muscles that create right-side torso rotation in the lengthened range, stand facing away from the cable so it's roughly behind your left shoulder.

Hold the cable handle in the same manner as described above while pivoting on the ball of your right foot. Rotate your torso to the right until the cable touches your left arm.

The logic that applies to the two-point cable rotation can also be applied to diagonal cable chops. In fact, cable chops, done low-to-high or high-to-low, from all three positions relative to the cable (standing perpendicular to a cable column, away from it, and facing it), is a more comprehensive approach given that each position makes up for an aspect of torso rotation missed by the other two stances.

The bench press is great for overall strength, but not a great pec builder... unless you use these two tricks.
Bench Press, Powerlifting & Strength, Tips, Training
Tom MacCormick April 27

This isn't one of those newbie band exercises either. It's an advanced strength move. Take a look.
Glutes, Tips, Training
Paul Carter November 19 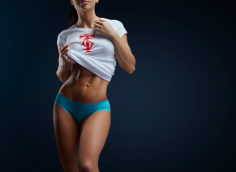 Train your core to stabilize the spine and resist hyperextension for better performance and better posture. Here's how.
Training
Dan North August 8