Do anabolic hormones derived from exercise affect muscle building? Or have we all been buying into baseless broscience? Let's see what the latest research has to say.

In terms of our body's communication systems, hormones work like old-school carrier pigeons. Think of the pigeon as the class of hormones and the message they carry as the specific hormone (insulin, growth hormone, etc.). Once released from a gland, hormones travel throughout the body and bind to specific receptors on an organ.

Here's a practical illustration. Barney goes to the gym to deadlift. After his first set, all sorts of messengers (hormones) in his body start firing in order to coordinate the repair process across multiple tissues. So if Barney deadlifts again, he'll have a bit more muscle, strength, and soft tissue such as tendons and ligaments. Hormones are one way for the body to communicate all the intrinsic factors that go into this complex repair process.

T levels above 1,197 ng/dL are considered supraphysiological since they're above the average natural production range. Typically, the only way to reach that high range, barring any pathophysiology, is through injecting synthetic T or other anabolic hormones. 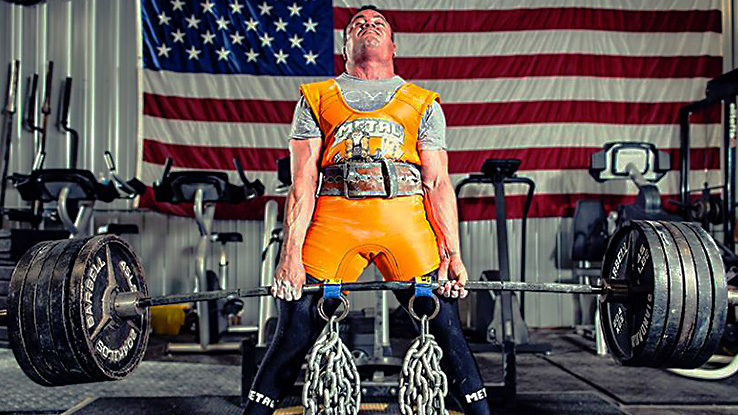 It's well established that doing heavy compound exercises will elicit a higher T release. Still, we need to show that this acute bump in T leads to more muscle.

In a great study done by West et al., 12 healthy young men trained their biceps for 15 weeks on separate days and under different hormonal conditions (high T versus low T). In the low T condition, they did arm curls only; in the high T condition they did the same arm exercise but followed it immediately with a high volume of leg exercises – 5 sets of 10 reps of leg presses and 3 sets of 12 reps of leg extension/leg curl "supersets" – to elicit a large increase in endogenous T release.

The theory being tested was that the higher T condition derived from the leg exercises would lead to an increase in muscle size and strength. Interestingly, each subject also served as his own control as one arm was exercised under the high T condition (from doing leg exercises) and the other arm was exercised on a different day on the low T condition (from just doing the arm exercise). Using each person as their own control helped keep the data "clean" from changes such as sleep, calories, protein intake, etc., that can affect the muscle growth process.

Researchers found that strength increased in both arms, but the increase was not different between the low and high T conditions. Also, muscle size wasn't different in either arm. Strike one for acute T bumps.

Physiology is messy. While increasing T is a good thing, it's not as simple a matter as increasing T by X ng/dL will result in Y extra inches on your arms. It's just not a direct, linear relationship.

Taking it one step further, work by West et al. from Phillip's lab showed that T was not associated with changes in lean body mass. He did find, however, that cortisol was associated with an increase in muscle size. Yes, the scary, bad hormone cortisol.

The last nail in the proverbial acute hormone hypothesis coffin was related to blood flow. Ronnestad's group stated that the reason Phillip's group didn't see any changes was that the hormonal-rich blood wasn't reaching the muscle. Remember, in the study from West, the arm exercises were done first and then the T-boosting leg exercises afterwards.

"..our data did not support the contention that leg exercise performed after arm exercise compromises potential adaptation to resistance exercise by 'stealing' hormone-rich blood flow."

In short, the hormone-rich blood from doing leg exercises reaches the muscles just fine – it just doesn't do anything! This data matches a guinea pig study (no, they didn't call the subject guinea pigs, they were actual guinea pigs) in 1975 by McManus that showed similar results.

I know this is frustrating, so what's a T-hungry boy to do if he wants to put on muscle?

Let's leave the crazy hormone manipulations through exercise to the broscientists!

John Meadows’ style of training is typically used by only very advanced lifters. Here’s how to make it work for you if you’re a mere mortal.
Bodybuilding, Training
John Meadows October 25
Part 2 continues to look at muscle catabolism, in addition to giving you methods by which to conduct fiendish laboratory-like experiments on yourself!
Training
Lonnie Lowery, PhD July 6

If you've spent most of your lifting career doing 3 sets of 10 reps, do the opposite and you'll see astounding new gains. Here's why and how to program it.
Bodybuilding, Powerlifting & Strength, Training
Chad Waterbury January 19
In the old days, whenever a doctor said something anything it was pretty much taken as gospel. After all, they're all incredibly bright, they all pull down some serious cash, and, well, they're doctors.
Training
Tim Patterson August 7