Many coaches believe that building explosive lower-body power requires performing Olympic lift variations such as the power clean and power snatch. The theory goes that the O-lifts improve rate-of-force development, which transfers to similar movements in the athlete’s chosen sport.

I say it’s not true.

Power, on a neurological level, is a specific skill, one enhanced through specific practice and coaching. And the only training that develops the raw material that can be molded for this specific practice is good old strength training.

To be fast, you must practice the activity at which you want to be fast. Lifting fast or explosively has very little to do with how fast you run, jump, or throw on the track or field.

Any performance transfer that does occur from the Olympic lift variations is due to the strength gains achieved from lifting heavy loads, not enhanced rate-of-force development. In other words, Olympic lifting won’t make you any more explosive than slower tempo, high-intensity strength training.

For those thinking, “He doesn’t like Olympic lifts because he’s never used them,” you’re wrong. After completing my Sports Performance Coaching certification at the Olympic training center in Colorado Springs, I spent a full year applying Olympic lifting protocols with various athletes.

After that yearlong experiment, I concluded that these lifts added no benefit to a well-designed strength program. Not to mention the risk of injury was greater compared to traditional strength moves, which isn’t an option for my professional and Olympic athletes.

The problem with the power clean and power snatch is that the training stimulus is dissipated compared to more isolated, so-called “non-functional” movements.

According to Dr. Doug McGuff, “Your body would much rather have five muscle groups contributing 20 percent of their energy capacity to an activity than have any one muscle group contributing 100 percent, so you’re playing into the conservation-of-energy preference of your genome.”

This conservation of energy is important when competing or practicing your specific skill, but when strength training, this is inefficient. I often ask my athletes, “If I could make your posterior chain (hamstrings, glutes, low back) 25% stronger, do you believe you would run faster?” All of them intuitively know the answer is yes.

Your nervous system is extremely capable of organizing and applying increases in strength. Think of the first time you put on a weight belt and did squats. You were immediately stronger; you could probably do 5-10% more weight.

You didn’t need to practice with the belt because your nervous system sensed an increase in stability in the area, which allowed you to produce more force with the surrounding musculature. In short, a well designed, moderate to slow tempo strength program will deliver better results with greater transfer than any Olympic lifting program.

The following sample leg program will recruit and strengthen a large pool of muscle fibers, which will transfer over to your sports activity. 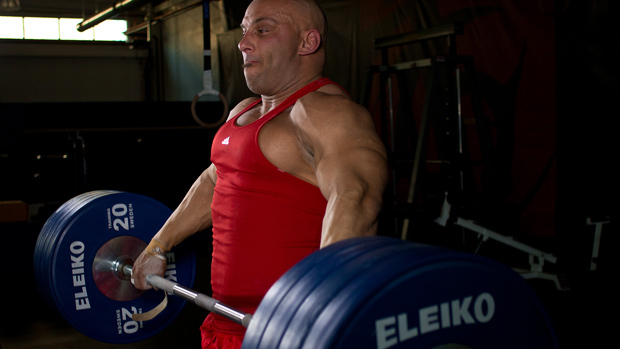 * Hanging Leg Raise – As Many As Possible.

More Power to You

I’m not saying you shouldn’t perform the Olympic lifts – you just don’t need to. So if you have an emotional attachment or just love doing them, certainly keep on. But the old school dogma “if you want to be explosive, you gotta do power cleans” is incorrect.