Like many people, my first exposure to density training was with EDT, which I used as a hypertrophy program. I gained some muscle, but I also got noticeably leaner. When I started tweaking the density of my clients' programming for added hypertrophy, I again noticed some fat loss.

Now I may be dense (pun intended), but after a while I catch on. In due course, I realized that with a bit of modification, density-based training would dramatically increase the rate of fat loss. (In retrospect, this shouldn't have been surprising given the speed of the workout. Always trying to beat the numbers from my previous session, I was training at a pretty rapid pace, my heart rate was constantly high, and I'd always be exhausted when I was through.)

So I took the density concept, blended it with the other successful bits of my fat loss programs and – I'm not bullshitting you here – created one of the most effective fat loss training methods I've ever seen. I've been using it in my programs for the past four years, so I figured it was about time to stop being greedy and share what I've learned.

Before we can get into the specifics of this program, we must first define training density, which is the result of looking at two very specific factors of training: volume and duration. Volume is your total workload or how many sets and reps you perform in a given workout; duration is the length of time your workout lasts. By combining these two, we arrive at your training density.

By increasing the amount of work you do in a given amount of time, you also enhance your ability to do work or what's known as improving your work capacity. While some may argue that this isn't necessarily the "best" way to approach hypertrophy, the results are undeniable.

Increasing training density helps to boost both strength and strength endurance, which has implications for muscle growth down the line.

Traditionally, there have been two ways to add to density:

If you're going to do 10 sets of 10 reps for squats, you're doing 100 total reps. For the sake of argument, let's say you perform this workout in 40 minutes. If I tell you that you must complete that workout in 30 minutes, then that will call for a drastic increase in training density since I'm asking you to complete an identical amount of work in 25% less time. You'd also call me bad names.

Staying with that same example, you have another option: keep the duration static at 40 minutes, and simply try to do more work within that time period by adding more sets of squats. So rather than just doing 10 sets, you'd aim to complete as many sets as possible, ending up with 12 or even 15 sets. (As an alternative, you could also add more reps to each set.)

In either case, in order to accomplish the goal while sticking to the parameters, you'd have to increase training speed and decrease rest periods. This would also increase work capacity.

I say "method" because this is not a complete fat loss program. This is something you can add to a good program.

In previous versions of density training, the idea was to do a few exercises over a specific block of time and get as many reps per exercise as possible, seeking to beat those numbers in subsequent training sessions. And that's a great method for gaining muscle with fat loss as a consequence.

However, when fat loss is the primary goal, I set things up differently.

As with nearly any great plan designed for drastic fat loss, I look to the old standby: fast-paced circuits. First we select a series of exercises (more on this below) and set them up in a non-competing fashion.

Sounds like just about any circuit training protocol, right? Wrong.

Instead of having a predetermined number of reps, you're going to be performing each of these exercises for time – you simply have to do as many as you can in a given time period. That's where general density comes in. The idea is to perform more reps on each exercise, and that's where the increase in density becomes a factor.

Now, here's where it gets kooky: for your second circuit, you'll be using heavier weight – substantially heavier weight. Rather than just create density circuits, I also took advantage of some other cool things that happen when your body adapts and seems to get instantly stronger.

Not only are we seeking to increase reps, but also increase weight before we repeat a given exercise. Again, this is applied to all exercises within a circuit.

Here's an example to illustrate:

Let's say you did each of the following exercises for 30 seconds* each: overhead press, bent-over row, squat.

* Note: Depending on the exercises, you'll vary the length of time in each set from exercise to exercise and circuit to circuit. Movements with a greater range of motion are done for longer periods of time than those with shorter movements. A chart is provided below.

Now, how is it that you're able to perform more reps with more weight? Simple: your nervous system is kicking ass. Essentially, you're looking to increase neuromuscular activation.

This has been written about fairly extensively, so I won't rehash too much. Suffice it to say that the degree to which you can stimulate your nervous system will have carryover to how much muscular force you can generate. The more neural activation you achieve, the easier it is to push heavier weights, because you'll have an easier time recruiting muscle fibers to do the job.

So the purpose of the set is actually twofold: first, it establishes a baseline number for all exercises, and gives you a frame of reference for performance as well as a goal. Second, and perhaps more importantly, your first set serves as a neurological primer. The weight is relatively heavy on the first set and will certainly start the metabolic processes involved in fat loss, but the best part is you'll be sparking neural activation.

Your first set should be a bit of a feeler set – sort of a working warm-up. The limiting factor should be time, not fatigue.

That is, at the end of the first set on any circuit, the feeling should be, "Oh, damn, I ran out of time; I totally had a few more reps in me!" and not "Holy crap that sucked! I can't believe that was only 30 seconds!"

With the first set, pace yourself and move at a quick but steady clip. Don't speed up as the clock winds down. Instead, just allow your pace to carry you through to the end of the set.

Your second set should be (if you'll pardon my use of scientific jargon) balls to the wall. As you get toward the end, speed up and try to crank out as many reps as possible.

Overall, you'll be lifting more weight for more reps in the same time period for an entire circuit of exercises. A few of these sets and you can see how fat loss – as well as the obvious increases in both efficiency and capacity – would be the end result.

The best part about density training is how fun it is. Because it's challenge-based, you have an immediate goal every set and every workout: do more than you did previously.

Additionally, because it's more of a method than a specific program, this version of density training is instantly adaptable to any type of training. I've provided two density circuits below, one using weights, and one done with just bodyweight (which you can try right now, just to see how awesome this is). However, density training works with kettlebells, resistance bands, sandbags and pretty much anything else you feel worthy of lifting and lowering – like children.

Of course, in the case of a bodyweight circuit, you may be saying, "Wait a minute, Roman! You said we're supposed the increase the weight? I can't do that with bodyweight!" That's a very fair point. You're going to make progress even without a weight increase, but to get the most out of a circuit or workout of that nature, I'd recommend using a harder variation of each exercise for the second circuit (going from regular push-ups to decline push-ups, for example).

The main thing is that you're working harder with each progressive set, aiming to take the greatest advantage of neural activation possible to do more work and burn a metric crap-ton of calories.

As a further benefit (as if you hadn't already figured it out), density training is exceptional for retention of lean mass.

Now that we're clear on the method and the benefits, let's talk training. As previously stated, the goal of this article is to provide you with a training method, as well as a template for creating your own workouts with the density method.

To that end, let's cover some basic rules for creating density workouts.

Of course, the most important aspect for density circuits is the length of time for which you perform each exercise. While you can ultimately decide on any interval you want, the chart below illustrates the recommended times that I have found to be most effective for each type of exercise.

And, because I don't want to leave you hanging, I've also designed two circuits for you to try out. Give'em a shot and leave your thoughts in the discussion section.

Although manipulating training density was originally designed for hypertrophy, we've seen that with a bit of ingenuity we can further modify the idea for fat loss. In fact, I'd go so far as to say that is one of the best fat loss training methods I've come across. Density workouts are fun, challenging and very effective. Try your hand at designing your own and post them in the forum for some critique from yours truly. 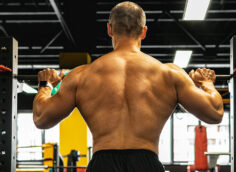 Is the targeted or the economy training method best for you? It depends on your goals and your body structure. Here's what you need to know.
Bodybuilding, Powerlifting & Strength
Christian Thibaudeau December 27

Fairly new to lifting? Here's some harsh advice you might not like, but you should definitely take to heart.
Bodybuilding, Tips, Training
Paul Carter July 3

Your best gains will come from getting strong on the big basics. Here's why, and what to do.
Tips, Training
Christian Thibaudeau March 10

After your big lifts, finish off your lats and get a good stretch with this exercise.
Back, Exercise Coaching, Tips
Jesse Irizarry June 15