The kid is delirious, that much is clear.

After the workout we see him stumbling into his Chevy Blazer. He gets in, starts it up, and backs right into the Prowler. The Prowler is fine, but his truck has a big dent.

We're laughing, thinking, "Man, the Prowler bit him even after his workout." But it didn't end there.

A block from the industrial complex where my gym is located, the kid has to open up his door to puke. That's when the cop spots him.

College guy, puking on the side of the road... the cop turns on his lights and gives the kid a sobriety test. In the end, he lets him go, but I have to talk to the cop, tell him about the Prowler workout, and vouch for the kid.

These days the cops know we're back here and they give the kids the benefit of the doubt. 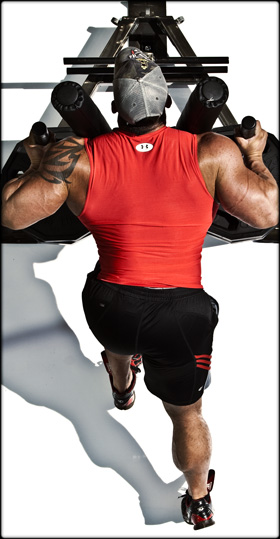 "That's cool, but I don't really need it," I thought when I first saw the Prowler.

We already did truck and car pushes in the back parking lot for the slower, strength-based stuff. For resisted running, we'd do hill runs or sprint with a standard sled attached to our waists. The Prowler was cool, but I had other options.

I ended up getting one anyway. Within weeks I got another one. With this one piece of equipment I replaced a sled, a truck, and a hill. The Prowler just does it all.

I have a love/hate relationship with the Prowler. I love it because it's so versatile. I also love the extraordinary results it produces in an extraordinarily short period of time.

The Prowler is the ultimate piece of equipment when it comes to training economy: getting the most bang for your buck in the least amount of time. Bodybuilders can use it to add extra volume and put size on. World-class sprinters can use it to get faster.

I hate the Prowler because, with certain workouts, it can be evil. Not just "difficult" or "taxing" but evil. Heavy, twenty-rep squats have nothing on the Prowler. But if you have the balls, it's one of best training tools you can ever use.

For skinnier athletes who want to put on muscle, we'll use the Prowler to add volume. We'll still do the traditional compound movements – squats and deadlifts, etc. – but we'll add in the Prowler for eccentric-less training. This allows us to increase the volume without breaking the athlete down.

Most of the time we do upper/lower body splits. If we do two upper-body sessions and two-lower body sessions per week using traditional weight training, we can use the Prowler to add in extra workouts on "off" days. More volume – without crushing the athlete with eccentric training – increases work capacity and builds more muscle.

The beauty of it is, this type of training also acts as restoration. The athletes actually feel better after the session than they did before. Done correctly, you can increase blood flow, flush out lactic acid, and enhance recovery.

You've seen the videos on YouTube: the guys puking, the guys laying on the ground unable to stand. Those are all in good fun, but those are challenges, not our actual workouts.

We use the Prowler mainly for speed and power, to increase strength and boost sprinting speed. We usually stay out of that lactic environment in our normal workouts.

I do a lot of 10 to 15-yard sprints with full recovery. I've seen an incredible increase in speed and running form. The Prowler dramatically improves acceleration technique – that first 10 to 20 yards of running a 40-yard dash.

The Prowler forces the athletes to get into the proper body position for acceleration. So not only are they faster because we've strengthened those muscles in a very specific manner using the Prowler, but because it engrains the perfect running form into their brains.

One of our specialties at my facility is training athletes for speed. Most speed and agility coaches are into the running drills, the ladder drills, and the quick-foot drills. Those things, alone, are the most overused and overrated aspects of speed training.

We don't do fancy running drills to get you faster; we go to the root of the problem by asking the question: why are you slow? Let's find out and correct it instead just doing more speed drills incorrectly. Those may get you in better shape, but they're not going to fix technique flaws or muscular imbalances.

Most of our Prowler workouts consist of what we call heavy-ass sled drags or HASDs. Why? Because you have to train slow to be fast!

Here's the beauty of HASDs: If you go heavy enough, you can't drag the Prowler behind you unless you position your body a certain way. That body position just happens to be the perfect acceleration angle.

Go heavy and you have to get into that position. Otherwise that Prowler's not going to move. And since athletes can't go quickly with it, I can yell coaching cues at them while they're doing it. It would be impossible to coach speed if the athlete was actually running. A 10-yard sprint takes about a second and a half. There's no way I could yell three or four coaching cues at them in that time.

You can't do the HASDs wrong, so you're engraving the proper motor programs into the athlete's brain and he's strengthening the most important muscles for acceleration (glutes, quads, hamstrings, calves) in the most specific manner possible.

With any other sport, you slow it down so you can teach and rehearse different aspects of the game. With sprinting you could never do that, but with HASDs you can. Plus it's physically making the athletes faster.

Some people argue that this doesn't work, that the athlete just "feels faster" after he pulls a heavy sled. But I've conducted hundreds of my own experiments using the Brower Timing System. This is what's used at the NFL Combine. It's fully electric with no chance for human error. The results of my studies on high-level athletes are clear: heavy sled dragging makes you faster.

If you can get a guy who's already fast in the 10-yard dash to take off a couple of hundredths or even a full tenth, that could literally mean millions of dollars for him at the NFL Combine.

"It's too slow to carry over to sprinting," some say. Complete bullshit! I've seen it happen too many times in my gym to believe otherwise. It definitely works. I've got guys who run 4.2's to prove it.

So, 90% of our work with the Prowler is done using these heavy-ass sled drags. The rest is short sprints, 10 to 20 yards with a light to moderate weight and full recovery, staying out of the lactic environment (read: no puking and passing out.)

A small fraction of Prowler training comes in the form of "challenges." And this is where it gets interesting.

Disclaimer: You only want to throw Prowler challenges in periodically. You don't want to make these a staple in your training; they're just too difficult to recover from and too easy to overdo.

Still, every now and then in training, you have to throw the science away. Don't worry about what energy system your sport requires, just see who has a set of balls and who's tough. Find out who's going to not quit.

The challenges will tell you a lot about your athlete or yourself. A lot of great athletes can run fast and jump high, but they'll be the first to quit when the lactic acid builds up or things get tough. That's not the kid you want on your team. You want the guy that's going to last during a freak play in the NFL that lasts up to a minute.

So, there are three reasons to do these crazy challenges:

I'll also throw in a Prowler challenge as a "gift" during the holidays, just an extra treat before they go home and start eating big meals with their families. The now infamous Christmas Eve workout is a good example.

This was the one that started it all. The reason this challenge covers 30 yards is because that was the distance from pothole to pothole in the parking lot of my old gym!

Try this when you first get your Prowler. You have to pass this challenge before you move on to the other ones.

The original Prowler challenge is four, 30-yard pushes, as fast as possible. The Prowler is loaded with two 45-pound plates and two 25-pound plates, for a total of 140 pounds.

Now, to complete the challenge you have to hold your puke for five minutes after you finish. If you puke after the five-minute point, you've still completed the challenge.

Why the five-minute rule? Because it's not while you're pushing the Prowler or even immediately after, it's that two to three minutes after when the Prowler Flu kicks in. If you can survive that, you've passed the test.

By the way, 99% of my athletes can now smash this test. The old videos are a little embarrassing to them. Still, this is a great beginner challenge.

For the NFL Combine, athletes are required to do 60-yard shuttle runs, basically suicides:

Now we do this with a Prowler. A 45-pound plate on each side is standard. For advanced athletes, we add extra 10's to each side.

It's not over yet.

Rest 90 seconds then start over and do the whole thing again. Try to complete the second round with only a five second or less drop-off from the first round.

By the way, the MMA fighters are the best at this one – better than the football players!

When a stud athlete, a true freak, comes to you the next day and says he's experiencing deep soreness in his abs, obliques, and core musculature, that's saying a lot about the exercise that got him that way. The plank row is one of those exercises.

Get into a plank position. Reach out with one hand and grab a rope attached to a Prowler. Now, pull it toward you.

If you can do this you're going to feel it the next day, and in the long run you'll greatly enhance core stability, which will help you to remain injury-free.

Maybe a Prowler isn't in your budget right now. That's fine, just do what we did: hill sprints, car pushes, etc. But the big-time Division 1 universities and professional teams don't have an excuse.

Instead of having twenty lat pulldown machines, buy ten Prowlers. I'm shocked that every team doesn't have one yet. No money? You had money for a preacher curl machine and not a Prowler? It's baffling.

I don't have any wasted equipment in my gym. Nothing in there is just for show and nothing collects dust. I have 5,000 square feet and we use every bit of it. The Prowler is, without question, the most-used piece of equipment in the gym. That's high praise considering the amount of traffic that comes through here.

Are you up for the challenge?

Want stronger, rounder, sexier glutes? Then give them their own day in the gym. Here's how to get it done.
For Women, Glutes, Training
Dani Shugart April 1

How to Build a Huge, Complete Back
Back, Training
Christian Thibaudeau February 14