The dumbbell row seems to be a painfully simple exercise to perform for even the most movement-challenged desk jockey, but I rarely see flawless dumbbell row execution.

Sadly, what I usually encounter looks like a perverse combination of a triceps kickback and a dumbbell concentration curl performed with more momentum than a crowded CrossFit class.

What the Dumbbell Row is Supposed to Do

The one-arm dumbbell row, when performed correctly, is one of the most versatile "bang for your buck" upper body exercises in your arsenal. The movement involves scapular retraction and depression, along with spinal extension and compression through the thoracolumbar region, and also acts as a core stabilization exercise through anti-rotation and anti-flexion.

The latissimus is one of the only muscles to run directly over the vertebrae of the thoracic, lumbar, and sacral spine, with direct tie-ins through the SI joint, making it an important exercise for back pain sufferers. Additionally, it helps develop thickness through the upper and mid back that's difficult to get through deadlifting or squatting alone, and helps improve scapular mechanics.

The row is typically intended to work the latissimus dorsi, rhomboids, lower traps, and erector spinae, and requires a large degree of stabilization from the rotator cuff. This means that if you're doing it correctly, you should feel the muscles between and below your shoulder blades working like crazy.

However, if you were to ask a dozen people in the gym where they feel it working, they'd tell you their elbows, biceps, wrists, shoulders, neck, hairline, glutes, and pretty much every part of their body except their lats.

Since no one's really working their lats, and the lats play a major role in low back and sacral segmental stabilization, we can logically deduct that one of the reasons many have a bad back is due to poor kinaesthetic awareness of their own spinal and scapular positioning on different movements. Maybe it's a chicken versus the egg debate, but the end result is still the same.

People tend to approach the dumbbell row with a kyphotic thoracic spine, posterior pelvic tilt, head too low or too high, elbow flared out to the side, wrist curling at the end to get extra height on the lift, massive torso rotations, jerk-pulls to use momentum for the last little pull, and any number of other movements that could be considered anything but a row.

Below is a good Dumbbell Row:

The old analogy of a row being "like starting a lawn mower" wasn't right even when people knew how to start a lawn mower, but now we have to look in our grandparents' garages just to find this relic from the past. No one uses gas powered mowers anymore; few even have a lawn to mow at all. Is it any wonder why apartment and condo dwellers can't figure out how to start a lawnmower in the gym if they've never started one in real-life? We need a new plan.

Your spinal position can influence your shoulder mechanics. As the lats are supposed to retract and depress your scapula, the row movement will only work properly if the spine isn't stuck in kyphosis.

A rounded back will limit the mobility of the scapula and make the exercise impossible to work the lats. By "straightening out" the spine and getting it into more of a neutral position, you allow the shoulder blade to move properly and get the lats and rhomboids to pull properly.

Here's a bad row with kyphosis:

Next, many trainees pull the weight straight up, which may seem like a common sense thing to do with a weight moving against the pull of gravity. But look at your positioning. The lats are below the shoulders, with the upper trapezius and levator group above the shoulders.

Due to the angle you're positioned on a bench, pulling straight up would work more of the upper traps and levators instead of the lats and rhomboids, as evidenced when you see someone's neck disappear at the top of their rows.

Below is a bad wide-elbow Dumbbell Row:

The benefits of teaching this cue instead of simply going straight up are that it forces the person to maintain a neutral or even extended spine to pull the shoulder into the pocket, and also reduces the chance of cranking up the activity of the upper traps. Working in kyphosis with a load while simultaneously coming into extension and rotation is a one-way ticket to a screwed up spine.

Let's address the spinal rotation issue. In most cases, rotation doesn't come from the scapula and shoulder but from the spine and hips, becoming more of a single-leg leg press with a weight in your arm than an actual row.

This can be attributed to a lack of scapular retraction to get the weight into the right position, and becomes a compensation pattern by turning the torso to get the body closer to the hand instead of the other way around.

With this movement the spine should be almost completely stationary, with the arm and shoulder rotating around it. The scapula should be retracting and depressing in that spiral movement, meaning it's doing all the work. This is where the row becomes a really great anti-rotation exercise as well as a back exercise!

A helpful cue to use when getting the spinal position to stick in neutral is to have the lifter flex their low back muscles and core muscles simultaneously until they can feel them holding tight. The lats act as a spinal extensor as well as a scapular retractor and depressor, so getting the low back to contract can help increase the amount of maximal contraction the lats can do with the activity, as well as help stabilize the spine for the movement.

A lot of people will say "engage your core," which makes many think "flex my abs," and inadvertently pulls them into a posterior pelvic tilt and slight spinal flexion.

While having the abdominal contraction is good, the change in spinal position isn't, so thinking about contracting the low back simultaneously helps keep everything happy. Plus, with the number of desk jockeys out there who can't get their lower backs to actually strengthen properly, making them aware of how to contract those muscles is an added benefit.

Finally, the finishing position in the row is typically with the scapula not in full retraction, a position that could indicate that the rhomboids and traps aren't working to their full potential. This will commonly look like a slouchy shoulder.

Below is a Dumbbell Row with poor scapular retraction:

This is a great example of a shoulder that isn't retracted and depressed enough to complete the movement. The spinal positioning is good, but the scapula isn't doing its job. It's sort of like a biceps curl not going through full elbow extension. Sure, the muscle is still working, but it's a far cry from bang-on perfect.

This could also be coming from tightness in the anterior shoulder, specifically through the clavicular head of the pectoralis major and the pectoralis minor. If you can't get your shoulder to retract all the way, it could be a combination of weak rhomboids and tight pecs, so doing some self-myofascial release on your pecs or even just gentle stretching may improve the range of motion and allow your rhomboids to contract through an unimpeded range of motion.

Here's an example of self myofascial release:

By pulling the shoulder back and thinking to "stretch the pecs" during the movement, you can ensure that the lats and rhomboids are doing everything they're supposed to do, and get that fantastic pump of a hard-working muscle between and below your shoulder blades.

Once you've mastered the basic technical components of the row, you can start to work on variations of the movement. By staying in only one movement pattern, you increase the chances of either hitting a repetitive strain injury (think distance runners leg & hip injuries), or at the very least hitting a plateau in performance that decreases the productivity of the workout.

By changing some small variables, like grip or stance, you can continue to stimulate new muscle fibres within the muscles being used, and give them some new stimulation to ensure they continue to grow and adapt. It also mixes things up so it's not the same old same old.

Holding the dumbbell at different points makes the grip and forearm muscles work differently, which affects the arms' ability to stabilize the weight and changes how the exercise affects the movement pattern.

Changing the position of the feet and hips provides a different base of support, pelvic position, and spinal position, which affects the muscles' ability to pull and thus the movement pattern as a whole. It's small changes like these that can lead to big differences.

Get Rowing, Get Growing

I was admittedly once one of the meatheads in the gym who thought heaving around the 120-pound dumbbells with absolutely atrocious form was making me stronger and packing on muscle so fast that the hot figure competitor girls would be lining up to make out with me.

Sadly, I merely looked like an overzealous dork with skinny lats who's dating options were as limited as my exercise expertise. Once I dropped the weights and focused on the technique components listed above, I was able to not only see an increase in back thickness, but I began lifting more weight with other exercises. I even found a girl to make out with on occasion. (There truly is hope for us all!)

It's one of those things that only the REALLY dedicated lifters do. The Zercher squat is as effective as it is painful. Try it.
Exercise Coaching, Squat, Tips
Jason Brown June 19 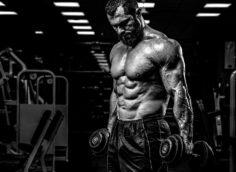