It's Friday night and I'm excited to be training tomorrow morning at Elite Fitness Systems HQ in London, Ohio. With nothing better to do, I check Twitter for the first time in months.

The first thing I see is a post from Dave Tate talking about eating pizza to get some nice bloat going. Having trained at Westside in the 90's with Dave, I knew this meant we'd be going balls-out tomorrow, so we'll need some overnight weight gain and hyper-hydration to meet the demands of the next day's session.

His Tweet compelled me to fuel up too, so I knocked down a half gallon of raw milk to get my own groove on right before bed.

It's Training Day. Be Jealous.

It's morning, and I'm driving to meet Dave for leg training. I can't stop re-living the old Westside days in my mind.

I enjoyed training with the guys there. We always had mutual respect for one another, even though I was a bodybuilder. I remember how we trained, the energy and the brotherhood.

As I walk through the door at Elite, the first thing I see is a line of squat racks. I'm staring at a sight of beauty: racks, chains, big-ass dumbbells, chalk dust, all of it engulfed in nice, loud music. There are a few girls crushing 400-pound squats, and a few guys destroying 800-pound squats.

It's my kind of place.

We start on seated leg curls, eventually hitting hard sets of ten. It occurs to me that Dave is focusing on the squeeze at the contracted part of the movement. He's not just moving the weight; he has a purpose. I like his newfound style. Back in the 90's, Dave just wanted to get the weight up no matter how, which is partly how he tore himself up so much.

We do four sets of ten, with 25 partial reps added on the end. As usual, my hams are on fire and loaded with blood.

Dave's turn. His execution is perfect. I was kind of proud of him. I tell people to do some crazy stuff sometimes – or in the case of leg curl partials, a lot of times – and I often wonder if people really do it.

Leg curl partials require pain tolerance, and you've got to be a little off in the head to even try them. Seeing Dave do the set, with perfect execution of the partials, tells me he's been following the advice I'd given him. He's not surprised at all by the pain. For him, the pain is just part of leg training, as it should be.

Next up is the squat... but not so fast. Dave hesitates before opting for leg presses. Who the hell was I training with and what the heck happened to Dave!? This is a 900-plus squatter who probably could destroy me, yet he chooses leg presses over squats? He says his back doesn't feel right. He's had cervical and lumbar herniations, so I believe him.

Let's think about this. Is Dave actually listening to his body now? I see the angel on one shoulder saying, "Do the leg press or you'll hurt yourself for the 789th time," and the devil on the other shoulder saying, "Go kill Meadows on squats and show him who runs this town."

Dave mentions he just finished a three-week phase of yoke bar squats that concluded with a set of 515 with ten chains for 15 reps. Now I'm shocked. Is he actually sticking to the program I gave him?

On the leg press, we begin to pyramid up. We do sets of ten on this huge-ass leg press where the machine itself probably weighs 400 pounds. Every set Dave does, he controls the descent and drives the weight up forcefully. As badly as I want to correct him on something, there's nothing to correct.

Sets of ten are a lot of reps for a powerlifter, but I know that if he hadn't been following the program he'd likely do something crazy toward the end. We stick pegs in the bottom to act as catches in case of any accidents, then pile on as much weight as we can get on the bars. Dave grinds out 20 reps. I take off a plate and get 14.

Now it's clear to me: Dave's focus has gone way beyond merely getting the weight up. His passion remains, but his finesse has improved. Dave's sights are now set on moving the weight for maximal results, and the way he does it is immaculate.

I'm in awe when someone can maintain that passion for decades, and Dave still has it in spades. He may do things differently now, but he still goes a hundred miles per hour.

The hack machine is another monster piece of metal. The carriage weighs 300-plus all by itself. All the EliteFTS leg machines I see are beasts. And without a doubt, they're the best I've ever used.

You can tell Dave puts a lot of thought into the design and function of each of these. I love the hack squat personally, so I couldn't wait to test it out. Also, I've been curious to see how Dave will do on hacks since he doesn't have a tight powerlifting suit on to get him out of the bottom, and he knows that I like to sink these rock-bottom.

Dave does his first set. Every rep is Jacque Cousteau deep. Again he's controlling the weight on the way down, executing exactly what I'm looking for. After three sets we do a final triple drop-set to murder our quads.

At this point, my head's spinning a little, and I feel like passing out. But that's the way I normally feel after a leg workout, so I'm prepared for it. Dave's sweating bullets and still fighting, so it's time to do more. 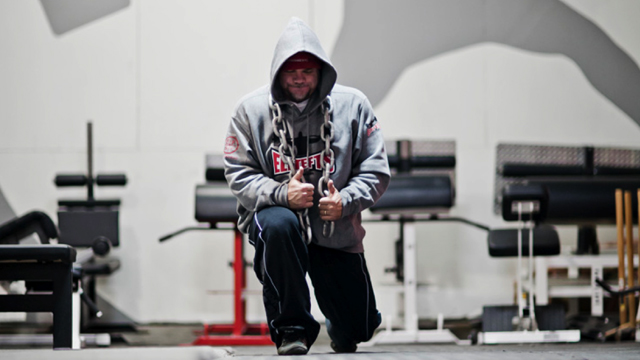 We choose walking lunges with chains wrapped around our necks.

We're nearing the end of the workout and I can tell Dave's struggling. You should struggle when you train this way. Toughen up, because this ride's not meant for the weak-spirited.

I laugh when I hear people say, "I did your leg workout no problem." Well, you may have done the exercises, but if it was no problem then you didn't do them the way I asked!

By now, it's crystal clear to me that Dave has been doing what I've been asking. After three or four sets of glute-ham raises, we call it a day.

I want to get a better idea of the extent of Dave's injuries before he moves on to his next phase of training. He's at week ten, on the tail-end of a twelve-week program. I've been making adjustments based on a questionnaire I gave him. His answers on the questionnaire look like a list of every injury known in powerlifting.

We talk about his shoulders first. His range of motion is bad. I knew it would be, but had no idea we'd have to say buh-bye to even standard side laterals. We already had to pull overhead pressing out of his shoulder training, but it's clear that we'll now have to rely more on hang and swing rear-delt laterals, and heavy side-lateral partials where you tilt your head back and just move the weight about six inches.

Truthfully, I think the hang and swing rear laterals give shoulders a rounder, bowling-ball look anyway, and Dave is after a specific look now, not just general size.

He's also torn a pec, actually he's torn both, but one was visually crater-like, and I don't know how he'll get much growth on that pec.

We'll probably continue to be creative in our approach, especially with exercise sequences. It probably can't get worse, but why would you sequence compound movement first in someone's routine that has already suffered severe injuries from doing the exact same thing?

We may try to get his shoulders and arms so massive the pec tears won't matter. They'll be a visual distraction. Dave's arms are healthy, no tears to the bi's or tri's, so we'll continue to train them in our normal high-volume, high-tension way with extra volume here and there on other days. There's a lot of muscle there, but I think we can get them even bigger.

For back, I don't really want to change much in Dave's training. He seems to be doing well. What we talk about instead is what I could do differently in my own training. I wanted ideas on how to apply more band tension in my back training routines, and Dave's got a few tricks up his sleeve in that department.

I can't really put into words how awesome it is to train with Dave, to learn from him, to beat him to death on hack squats (ha ha), and to just feed off his passion for training. The feeling is indescribable.

If you want to know more about the Dave and Dog experience, join us below on the Livespill!

Use kettlebells for this complex, which includes two types of flyes and one press.
Bodybuilding, Chest, Exercise Coaching, Tips
Christian Thibaudeau May 4

Seated rows are a back-building staple, but you've never tried them like this.
Exercise Coaching, Tips
Joel Seedman, PhD March 14