It's been two weeks since Dave and I laid a massive beat down on our legs. I couldn't wait for Round Two.

I arrived in London, Ohio about 30 minutes early, so I stopped at a McDonalds for one of those fruit and nut packages. I'd already had a few organic eggs and a Metabolic Drive shake mixed with raw milk, but considering the torture I was about to endure, I figured a few more calories wouldn't hurt.

I hoped once the bullets started flying that I wouldn't be seeing this snack again, if you catch my drift.

Today's workout called for chest and shoulders. I was curious to see how Dave trained his pecs considering all the injuries he'd suffered. I've also had numerous pec strains due to starting with barbell bench presses, and because of this my routines are designed to get a massive amount of blood into the pecs before hammering away with basic exercises. Not only does this help prevent further injury, it's also an optimal hypertrophy strategy.

We started with banded hammer inclines. I set the seat very low and focused on driving the weight upwards in an arc. I still get the same pec contraction but feel it less in the rotators as opposed to when I keep the seat up high.

The bands are great because you feel the increased tension at the point where you contract your pecs, requiring even more effort to finish the rep. We didn't hold back for fear of being weak on other exercises. On the contrary, we blasted out three or four excruciating sets.

Dave needed help getting each set started – his right shoulder has limited range of motion – but once he got the weight up, he was a monster. The workout was off to a great start.

We moved to Smith machine incline presses with a slight angle. I don't like steep angles when training in a Smith machine, whether it's incline or decline. Executing perfect reps, we worked our way up to a weight we could only manage six or so reps with, and then unleashed hell – a brutal drop set that has us cursing existence. 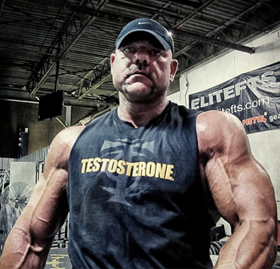 Dave's form was what I'd expected – he kept his elbows in tight to protect his pecs. This is less stressful on the pec insertions than the typical "elbows out" form. My preference is somewhere in the middle.

Dave's last set was a killer. He grabbed a pair of Grip4orce grips and stuck them on the bar. Asked how these compared to Fat Gripz, Dave said that he prefers the Grip4orce for this movement as you have to squeeze to keep them shut, thereby delivering a much harder contraction.

Dave cranked out as many skin-stretching reps as he could with the Grip4orce on, then finished the set without them. Adding the Grip4orce completely gassed Dave's triceps, forcing his chest to pick up the slack.

I'd never thought of doing this – hell, it might be perfect for someone with lagging triceps – but what really struck me is how Dave is constantly looking for little ways to better blast a muscle, despite the fact he's forgotten more about training than most will ever know.

We moved to one of my favorite pec exercises, decline dumbbell presses. This is another exercise that I avoid using steep angles on, so we grabbed a sit-up bench and lowered it all the way to lessen the angle.

The movement is all pec. We lowered the dumbbells with a neutral grip, let the elbows get deep to stretch the pecs, then forcefully blasted back into the starting position with an added flex.

After Dave's first set it was clear his right shoulder was a limiting factor. I suggested he lighten the weight and slow the tempo while increasing the contraction time of each rep. I wanted Dave to make 70 pounds feel like 150.

This made a huge difference and I could see his pecs start working again. With Dave, heavier sets begin to look like a modified dumbbell JM press because the heavier he goes, the more his ridiculous triceps take over.

We finished with reverse-banded bench presses. We worked our way up to a decent weight with moderate sets of five reps or so. Then I told Dave to bang out one really high rep set of 15 reps, but AFTER he did machine flyes. The added pre-exhaust was to ensure he really hammered his pecs, as Dave's pressing form is so triceps dominant. As mentioned, Dave keeps his elbows in tight against his body; great for triceps, not so great for pec development. 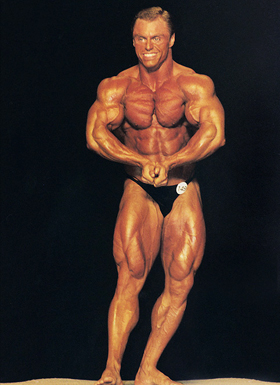 Now it was on to shoulders. This would be simple, short, and sweet. And painful.

Those struggling to add delt size, pay attention. We started with heavy bent-over swing rear delt raises. You let your arms hang down straight and "hinge" with your rear delts.

Don't flex your upper back and traps, just swing with your rear delts. The range of motion is short; it has to be to maintain form with the heavy weight. It may not sound like much, but trust me it's extremely difficult.

We did the following rep scheme – 25, 30, 35, and 40 reps with the same weight and in that order, resting about two minutes between each set. The 25-rep set burned like fire, so you can imagine how the 40-rep set felt.

Next were ultra-heavy standing lateral raises, supersetted with one-arm banded laterals. The dumbbell lateral raises are only 6-8 inch swings done while you tilt your head back. The weight should be so heavy that you need to wear straps.

After doing 25 reps, we grabbed a band and stepped onto it with one foot (opposite of the working arm), and did 10-15 one-arm laterals with an extreme range of motion, pulling each rep all the way up overhead. Can you say pain?

We were fried. Well, what I mean is, I was fried – but when I looked over Dave was doing the battling ropes. He did 100 reps straight, changing his form occasionally to work different areas of his shoulders.

Thibs would've been proud as the ropes are eccentric-less, allowing you to perform more work. Not to be outdone, I decided to see how much pain I could really take. I told Dave I was going to go balls out with one style, and go straight to 100 reps.

I used the typical "snapping the rope down" version, and with every rep I used maximum power. It was really painful somewhere around 30 reps. 50 it started to scream. I don't remember much past 70 except that I didn't stop till I hit 100 reps.

For those keeping score, this is what we did.

The workout was finished, but Dave had some questions about diet. More on that in the next part of this "diary entry."

More ways to strip off the fat while building some size and strength along the way.
Bodybuilding, Powerlifting & Strength, Training
Wil Fleming November 1 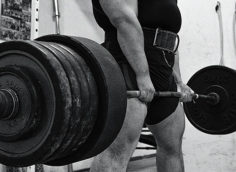