The key to getting the best training results at the fastest rate
is heavily dependant on an effective progression plan. As
mentioned in my book, Muscle Revolution, there are five
progression methods that I often employ with my clients. But
the question often surfaces: Which progression method is best
for me? So I'm here to elucidate what method you should
use, based on your training age.

In my world, your training age is defined by how long
you've been consistently training, and what loads you can use
for the bench, squat, and deadlift. Here's how I break
it down:

Beginner: A person who's been consistently
training for less than one year that can't bench his
bodyweight or squat and deadlift at least 125% of his
bodyweight.

Intermediate: A person who's been consistently
training for less than two years that can bench his bodyweight and
can squat and deadlift at least 125% of his
bodyweight.

Advanced: A person who's been consistently
training for more than three years that can bench press 125% of his
bodyweight and can squat and deadlift 150% of his bodyweight.

Now, with those definitions out of the way I'm going to
show you how to organize your training progressions for maximum
hypertrophy. In other words, these progressions aren't ideal
for fat loss or maximal strength, but you'll probably enhance
both along the way.

Progression For Beginners (Load): A beginner
can't go wrong with a total-body plan that consists of four
compound movements at each session. Training frequency should
start with three sessions per week.

If you're a beginner you should focus on a load
progression. What I mean is this: with each subsequent
session you should increase the load 2-3%, or whatever available
loading increment is closest. So if you're doing
overhead presses with 100 pounds, and if your gym only allows for
five-pound increments (5%), that's fine, don't sweat
it.

The reason why beginners should focus on a load progression is
because their nervous system isn't efficient enough to recruit
a large percentage of the high-threshold motor units.

Also, each of the three workouts each week should consist of a
different load. I like to start beginners with a plan such as
the following:

• Monday: 4x6 with your 8RM for the front squat, wide grip
pull-up, dip, and power clean.

• Wednesday: 3x9 with your 11RM for the deadlift, one-arm row,
bench press, and overhead press.

• Friday: 3x12 with your 14RM for the Bulgarian split squat,
chin-up, decline bench press, and one arm snatch.

When you repeat any of the above workouts, you should increase
the load 2-3%.

Progression For Intermediate (Reps): An
intermediate would do well to perform four compound movements along
with two single-joint movements at each session. Training
frequency should start with three sessions per week.

If you're an intermediate, focus on the rep
progression. The reason is because it forces your muscles to
maintain tension for longer periods of time. And since an
intermediate has trained long enough to recruit his
highest-threshold motor units, longer sets often boost
hypertrophy.

Again, each session should consist of a different load.
Here's how a sample plan looks:

For the rep progression, I like to add a rep to every other
set. The reason is because adding a rep to every set, for
each subsequent workout, can prove too difficult for many.

Progression For Advanced (Set): For advanced people,
I've had great success with three compound movements along
with three single-joint movements at each session. Training
frequency should be 3-4 sessions per week.

The reason I like the set progression is because advanced people
can recruit most of their high-threshold motor units. So by
adding more sets you're able to keep recruiting those motor
units, even when fatigue accumulates. Also, advanced people
should do lower reps with each set. Here's how it
looks:

With each new week, perform one additional set with each
movement.

It's as simple as that!

This drill will help you with that slumped, kyphotic posture. Do about 10 reps in each position as often as you'd like.
Exercise Coaching, Mobility, Tips
Tim Henriques June 30

This is one of the best overall torso and core builders. Here's how to do it.
Exercise Coaching, Tips
Christian Thibaudeau February 4 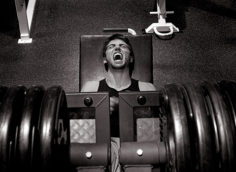