When it comes to training calves, most people leave room on the table in terms of hypertrophy.

I'll be the first to admit that the lower legs seem to be the most "genetically influenced" muscle group in that some individuals don't do squat (pun intended) and have great calves, while others can't seem to develop much of anything no matter what they try.

However, with hard work and consistency, I believe that most lifters can override their genetic curse and achieve at least balanced lower leg development.

If you're a "don't you gimme any of that sciency crap" kind of guy, you can skip the following section, but I think it's important to understand some of the functional anatomy and biomechanics of the lower leg to create the best possible program for growing the calves.

However, barbell squats activated more peak gastrocnemius muscle than any of the calf raise variations. It appears that the calves work very hard to stabilize the knee joint and provide balance during heavy squatting. In other words, just walking the weight out during heavy squats hits the calves pretty hard.

Basically, the research doesn't tell us jack shit for identifying the best methodology for calf growth. It does give us some clues, but at the end of the day we're going to have to go by anecdotal evidence to create the best possible program for lower leg development. 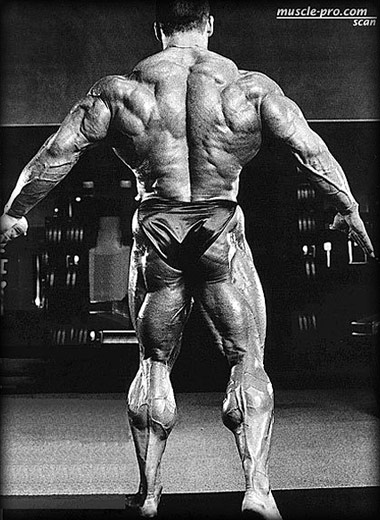 You always see the "heavy versus high rep argument" for calf growth on internet forums. I've always wondered why lifters seeking maximum calf hypertrophy would limit themselves to just one type of stimulus. Why do one or the other when you can do both?

As previously mentioned, there's a huge genetic component to calf development, so if you're genetically cursed below the knees your only option is to combine methods and get strong at a variety of exercises. For our program, we're going to use many different strategies, most of which are described below.

The lower leg muscles will be trained three times per week. Each workout will be separated by 48-72 hours.

Repeat this two-week cycle three times for a total of two months of calf abuse.

After this two-month blast is complete, return to a more sane calf training rotation of once or twice per week, being sure to include a wide variety of exercises and rep ranges but keeping the total volume per session low to allow supercompensation to occur.

You'll likely find your calves continuing to grow during this deloading period, hopefully reaching a level of respectability that allows you to not wear jeans at the beach anymore.

Stubborn calves are a tough nut to crack as there's such a huge genetic factor that simply can't be avoided. But even if you did draw the unlucky "calves like a flamingo" card, there's no reason to say "screw it" and quit training them completely. A little science combined with some smart programming – and a ton of effort – and you may find yourself proud to wear shorts again, free of your crippling calf insecurities.

Calf training may not be fun, but hey – at least it's cheaper than therapy.

This is the most deceptively difficult core exercise you'll ever do: a single-arm plank holding the eccentric isometric position of a renegade row.
Exercise Coaching, Tips
Joel Seedman, PhD March 21

These two drills will improve your mobility so you can lift more weight comfortably and finally build some decent quads.
It Hurts Fix It, Legs, Squat, Tips, Training
Linden Ellefson December 6