In the constant arms-race of training techniques used by powerlifters to get stronger, a few innovations have come along and changed the way people train for the sport. It's a constant evolutionary process. Those who fail to adopt new methods and tools in powerlifting generally stay about as competitive as a soldier with a musket on a battlefield full of automatic weapons.

Imagine a modern powerlifting gym without bands or chains. These things aren't just novelties; they're necessary tools in the quest for maximal strength. A few decades ago, though, nobody had ever really heard of using them or considered them necessary to win a meet.

At its last meet, the powerlifting team from Downtown Gym in South Dakota, led by Jesse Tetreault, CSCS, not only took most of the first-place positions, but set four state records in the process. The reason? It might have something to do with the new tool that is rapidly putting them ahead of the competition. That tool is Crazy Bells.

A Crazy Bell is a kettlebell attached to both ends of a barbell by a band. Bench pressing with Crazy Bells feels like having a wild animal tugging on the bar as you move. It has to be experienced to truly understand the feeling. The only way to press with it is to stay absolutely tight throughout the entire movement.

Crazy Bells are used by experienced lifters mainly as an injury prevention device on the bench press. The unstable, dynamic load places a huge emphasis on stabilization muscles as the entire shoulder girdle must fire maximally to keep the bar path tight and stable throughout the press.

This can be used as a teaching tool for beginner lifters as a way of teaching bar control and tightness. It's a great tool for lifters with shoulder issues and can be used to build work capacity in pressing movements. With advanced lifters, it is a novel stimulus that can force further neural adaptations and eventually greater strength.

The size of the band used will vary with the weight of the bell. For a 16-24 kilo kettlebell, a light Jumpstretch band (the purple one) works fine.

Jesse has used loads as low as ten pounds per side to teach bar control to novice lifters and as much as 100 pounds per side for his advanced lifters, with repetitions ranging from singles to 20 reps.

Like bands and chains, the Crazy Bell is generally used as an addition to static weight, not as the sole source of weight.

Double the band over and then pass it through the handle of the kettlebell. Put your hand through the loops on either side and hold them together. You should now have the band looped over your hand four times. Pass this around the bar, outside of the weights. Now, select your buddy with the best reflexes and make him your spotter.

If you don't have any kettlebells handy, no worries. Just use 25-pound plates.

The Lift – How Not To Break Your Nose

It is absolutely crucial to have an attentive spotter, as the first time you lift with Crazy Bells just controlling the bar is going to take all the focus you have.

Perform the lift as you would a standard bench press, but focus on gripping the bar as hard as you can and maintaining maximal tightness throughout your body. Jesse often starts with partial reps using a foam roller to stop the range of motion early. This has the added benefit of providing a pad in the event that the lifter slams the bar into his or her chest at the bottom.

When To Use It

Due to the rapid neurological gain potential in lifters who have never used them, Jesse recommends a frequency of twice per week minimum. His lifters use them as much as four times per week and never less than once per week.

As you adapt and get stronger, progress by adding extra hanging weight to the bar.

What About Other Lifts?

Generally, the potential danger with Crazy Bells outweighs the benefits. Attempting to use them with a squat or deadlift is more likely to lead to a strained back than any major progress in the lift.

One variation that has proven effective is using a kettlebell as an assistance exercise for shoulder press. There are no bands involved here, just grab a kettlebell by the handle and flip it upside down so that the heavy base of the bell is on top. From a standing position, perform a standard single arm overhead press. Be sure to maintain braced abs and keep the lumbar spine stable throughout the movement. The weight in this manner will be extremely difficult to balance and will require constant, focused effort to stabilize. It also develops incredible hand strength.

Stay Ahead of the Pack

Jesse didn't invent Crazy Bells. He came across them by perusing the training logs at Elite Fitness Systems. There is a new weapon available in the arms race of lifting and you now have an opportunity to try it out while it's still relatively unheard of and only being used by the few elite groups who stay at the forefront of innovation. Get to the gym. 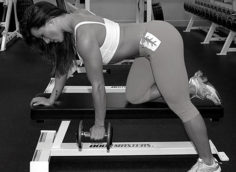 Build a better back with this one-arm row variation.
Training
Kevin Mullins August 28

Sure, you squat, but do you squat BIG? Master coach and powerlifter Dave Tate will show you how.
Powerlifting & Strength, Squat, Training
Dave Tate March 23
I have to admit, I debated long and hard about running this interview. Don't get me wrong, there's nothing wrong with it and I have nothing against Dorian Yates.
Training
T Nation May 11