What's a Contrast Set and Why Should I Do It?

The ability to apply force quickly can mean the difference between a successful PR and a lift that stalls halfway and results in a miss. In a squat competition, I'll put my money on the guy who explodes out of the hole with authority versus the guy who has trouble generating force quickly.

Louie Simmons includes speed work as an integral part of his programs because it enables you to lift more weight. For guys that don't have time to do separate Dynamic and Max Effort Days, contrast sets are a way to build power while still getting heavy strength work at the same time.

How Does PAP Work?

We're not 100% sure yet. According to Bret Contreras, the potential mechanisms that cause PAP include phosphorylation of myosin regulatory light chains, increased recruitment of higher order motor units, and changes in pennation angle. Studies have also suggested that PAP is caused by increased synaptic excitation in the spinal cord.

What we do know is that PAP increases the force exerted by a muscle due to its previous contraction. According to scientist and Supertraining author Yuri Verkhoshanksy, the effect of PAP is like "lifting a half-can of water when you think it's full." 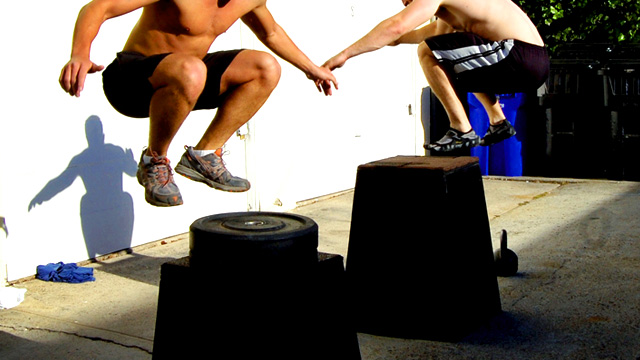 Depending on the athlete's goals, we have two different variations of high-velocity contrast movements.

Rate of Force Development (RFD). RFD refers to the body's ability to accelerate from a standstill (similar to starting strength). An example would be jumping from a seated position.

Elastic explosiveness. Refers to the body's ability to generate force by way of the stretch shortening cycle through a countermovement. An example of this would be a squat jump in which the athlete flexes his hip and knees quickly before jumping.

Which Should You Work On?

There's a simple test to determine which type of contrast movement will benefit you the most. Simply perform 3 vertical jumps, one with a normal countermovement, one with a paused start, and a depth jump from a 12-18 inch box.

The depth jump should allow for a higher jump due to the effect of the stretch shortening cycle, so if your depth jump isn't higher than your standing vertical jump, it means your muscles aren't effectively harnessing the energy created by the drop from the box.

For each contrast set, the weight should be at or above 90% of 1RM so that the lifter performs 1-3 reps of the heavy lift followed by 3-6 reps of the high-velocity movement.

Keeping the volume low during the heavy lift will lessen the effect of fatigue and allow for maximum force production during the explosive movement while maximizing the effects of PAP.

You should add a 30-second rest interval between the heavy lift set and the explosive movement. This gives the involved muscles time to recover, while still allowing the lifter to take advantage of PAP from the heavy lift.

Also, the addition of a 15-second rest after each rep of the explosive movement will allow for maximum velocity on each rep. After finishing your explosive reps, rest for 3 minutes before the next set.

Since it's unwise to start off by throwing 90% of your 1RM around, include 3-5 warm-up sets before piling the weight on. However, to avoid muscle fatigue before the work sets, only do enough warm-up reps to get your blood flowing. 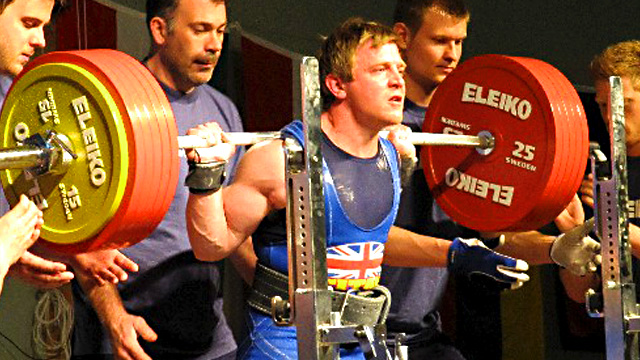 Then after doing the heavy set, strip off the extra 170 pounds and do the speed squats with 205. Taking off the extra weight by yourself takes about 30-45 seconds, which is a good rest interval between heavy and explosive movements.

When doing speed squats, follow Louie Simmons' guidelines for weight and keep the intensity around 50-60% of your 1RM. In an ideal world, we'd use carefully calculated intensities for speed squats, but following this table will save you time and make the entire process a little more streamlined. (Follow the table below to determine how much weight to use on both the speed box squats and the regular speed squats.)

If your goal is to improve rate of force development, pair speed box squats with your heavy squat. To do speed box squats, simply sit onto a box that's set at or slightly below parallel. Come to a complete stop and then explode up, squatting the weight as fast as possible.

To improve elastic explosiveness, pair the heavy squats with regular speed squats. Concentrate on descending to depth as quickly as you can before reversing direction and exploding up. A fast countermovement causes greater effect of the stretch shortening cycle, which will increase concentric acceleration out of the hole.

To improve rate of force development, pair heavy deadlifts with explosive pull-throughs. Stand with your feet slightly wider than shoulder width, holding a rope attached to a cable. Reach back between your legs while maintaining a flat back.

Without using a countermovement, powerfully extend your hips and knees and lock out the movement like you would a deadlift. Keep the weight for the pull-throughs at or below 50% of your deadlift 1RM to ensure high velocity movement.

For developing elastic explosiveness, use heavy kettlebell swings. Again, the goal is high-velocity movement, so pick a weight that you can move explosively while maintaining good form. Start with a 32-kilo kettlebell, then progress to a 36-kilo, 40-kilo, and a 44-kilo over time.

If you don't have access to heavy kettlebells (at least 32 kilos), then use heavy dumbbells in their place.

Start with a 70-pound dumbbell and progress from there as your form allows.

The med ball chest press is a great choice to pair with the bench press, but if you don't have access to medicine balls, plyo push-ups will also work.

To improve RFD, start with the med ball on your chest at a standstill, relax completely, then explosively chest pass the ball upwards as hard as you can.

Choosing the weight of the medicine ball depends on the individual. Make sure to choose a weight that you can throw with consistent velocity throughout the entirety of the set. It should be a weight that's challenging to move fast, but not prohibitively so.

For elastic explosiveness, use med ball explosive presses. Have a partner drop the medicine ball to you from above while you lie on your back. Then, catch the ball and throw it as high as you can after a short countermovement. Think about having soft hands and then quickly getting rid of it, like playing hot potato with an egg.

If you don't have access to med balls or room to throw them, perform explosive push-ups from a standstill on the ground for RFD, or plyo push-ups from an elevation for elastic explosiveness.

Contrast sets are best done at the start of your session. If your program already includes a day for squatting, deadlifting, and benching, simply replace your regular sets with contrast sets.

To increase training density, it's a good idea to include a set of mobility work or other active recovery exercise during the 3 minute rest periods between contrast sets.

Offseason athletes should use contrast sets for 3-4 weeks at a time, usually once per offseason. I don't like the idea of doing explosive work during the competitive season. By saving them for the offseason, we're able to develop explosiveness without sacrificing strength gains.

For those training solely to increase the big lifts, work contrast sets into your program every 3 months or so, depending on your needs. Guys who feel they need to drastically increase their explosiveness could benefit from using them every one or two months.

Strengthen your spinal erectors, get stronger in all the big lifts. Do 3 sets of 10-12 reps once a week using light weight.
Back, Exercise Coaching, Powerlifting & Strength, Tips
Paul Carter March 11

Sometimes even the best lifts stop working. Here are 10 variations to get you growing again.
Bodybuilding, Training
John Gaglione May 5

This exercise does a great job preparing the body for your sport, and of course it's a very effective hamstring and glute builder.
Deadlift, Glutes, Legs, Tips, Training
Eirik Sandvik April 2