Conditioning is usually pretty monotonous. We get sucked into a routine, and "routine" is exactly the problem. Variety, however, is a great thing for both physique and sanity. Enter station training.

What is Station Training?

Find a clear area. Choose two exercises and set up dedicated areas 10-40 yards apart. You'll perform an exercise at one station and then perform a locomotive exercise to get to the other station, where you'll perform the second exercise.

For clarity in programming, think of each complete workout you create – two stations with locomotion in-between – as a "scheme."

In this variation, we'll use stations with dumbbell or barbell exercises set up with a 10-rep weight. The goal is to get 6-8 good reps, which will probably be difficult because you'll be breathing heavily from the locomotive exercise. Good heavy exercise choices are low-technique compound movements that can be performed safely without having to use flawless form – barbell and dumbbell rows, presses, deadlift variations, and squat variations all work well. Ballistic movements like Olympic lifts don't mix well with fatigue.

Dynamic choices include sprints, side shuffles, backpedals, jumps, bounds, hops, and skips. Most commercial gym-goers prefer not to bounce around like a bunny, but for those of you in more private settings or who don't give a shit, jumping, bounding, skipping, and hopping is fantastic for building athleticism and getting the heart rate up.

The sprint is going to become a hard run once fatigue sets in, but that's okay, just push the pace and move fast. Get to the station exercise as soon as possible. That may be near instantaneous for some, or 10 deep breaths later for others. The point is to keep moving, but understand that as long as you're breathing heavily you're still increasing your conditioning, even if you're not pushing iron at that precise moment.

In this variation, "dynamic" can mean a lot of things, but in this context it most often means calisthenics or explosive movements – things that will get the heart rate up fast – while allowing semi-rest for the heavy locomotive movement. I suggest 30-60 seconds for the dynamic exercises, or simply going hard and moving on to the locomotive movement when fatigue or boredom gets severe.

The heavy movement will be relatively slow because the weight needs to be so heavy that you barely make it from one station to the next. My favorite choices are heavy farmer's walks, dumbbell lunges, and sled pushes and pulls. (Our gym's 10-yard backward sled pull record is 860 pounds.)

In the volume-based variation, we're looking to get a good pump and a lot of work done. We won't choose calisthenics and we'll let the locomotive exercise and higher rep range (10-15) get the heart rate up and pump blood into the muscles. Mixing compound movements with more characteristically bodybuilding-type movements works well.

There are two good options:

Two turns at each station is a good starting point, which will provide four locomotive sets and take approximately 8-10 minutes, depending on the exercises. From this, you can tailor the exercises and schemes to suit. Volume schemes can work well as high as three or four turns per station.

If I'm using only one scheme as a complete workout, I'll typically do a push exercise and a pull exercise as the stations and a leg exercise as the locomotive. This is a simple, balanced workout. Beyond this, you can get deeper into hitting more body parts and movements. A good starting point is the big six, around which I base most simple workouts:

Beyond choosing balance in the workout, it's a good idea to pick exercises that "rest" one another. If you're doing goblet squats as station A, running sprints as the locomotive, and performing RDLs as station B... you're going to die.

Sure, you'll earn your "brutal leg workout" merit badge, but the quality of every exercise will suffer. I also get concerned when people want to run with exhausted hamstrings. That's not to say you can't have leg exercise overlap – you can – just be smart about it. Moving from leg to upper body exercise is the easiest way to design a sensible station scheme. 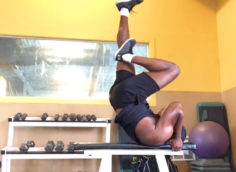 The standard dragon flag is great, but big guys need to use this variation. Their long levels make the regular version tough on their lower backs.
Abs, Exercise Coaching, Tips
Lee Boyce October 16 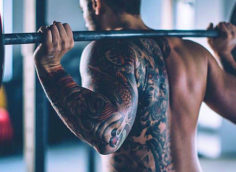 Q & A with one of the world's premier strength coaches.
Bodybuilding, Powerlifting & Strength, Question of Strength, Training
Charles Poliquin June 19

The basics of benching, the fine points, and a solid 16-week program. Get it all here.
Bench Press, Chest, Powerlifting & Strength, Training
Matt Kroc July 27